By 2015, TEAM BUFO had a good understanding of cane toads in Australia - and especially, of how the toad's increasingly rapid spread westwards across the tropics in Australia had caused them to evolve rapidly, to become faster and better invaders. But there was a missing piece to the puzzle ... what did cane toads look like and act like when they first brought to Australia? To fill in that gap, we needed to study cane toads in the place from which they came to Australia - that is, Hawai'i. 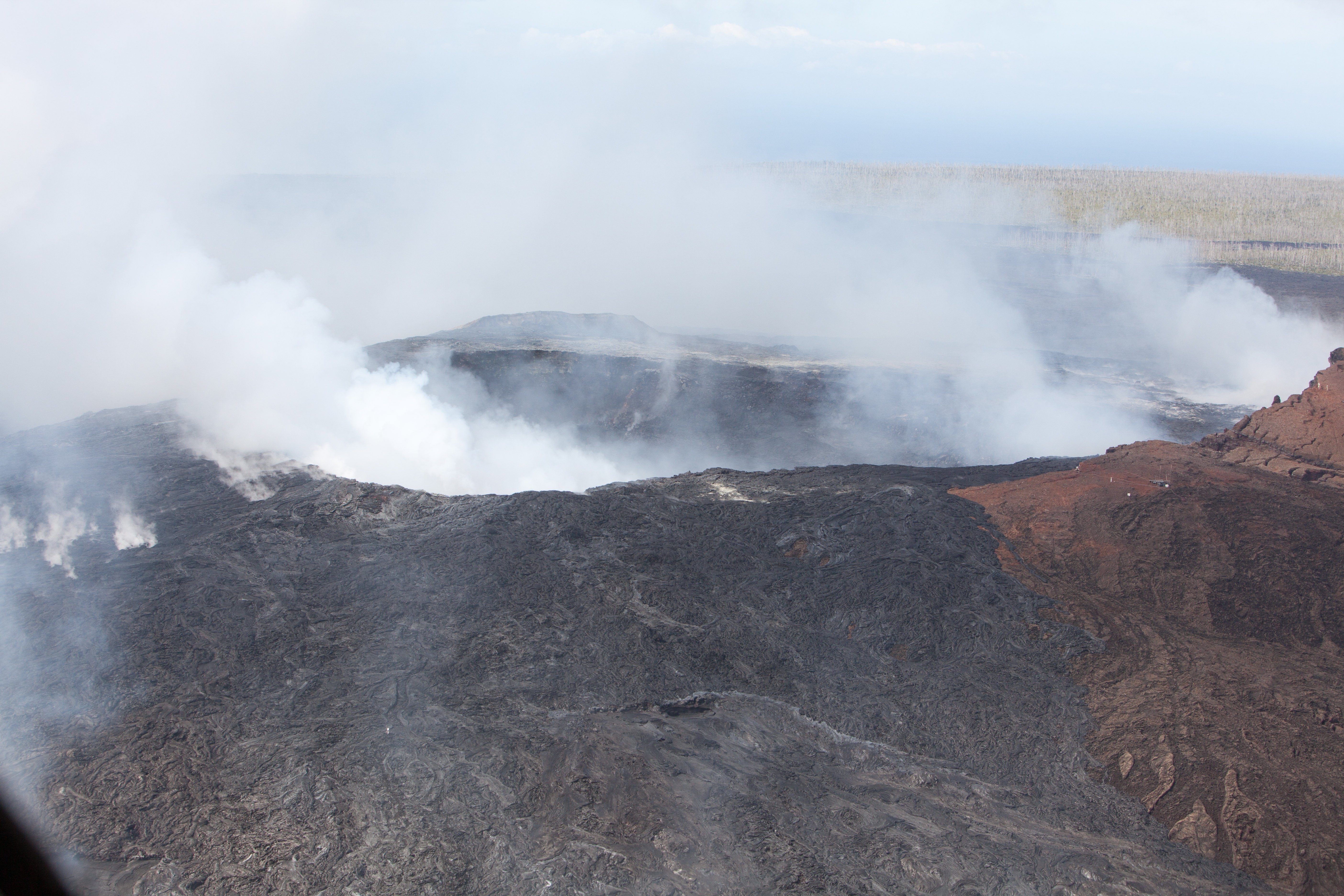 The Hawaiian islands emerged from the Pacific Ocean because of volcanic activity - and that activity is continuing to the present day. Photo by Terri Shine. 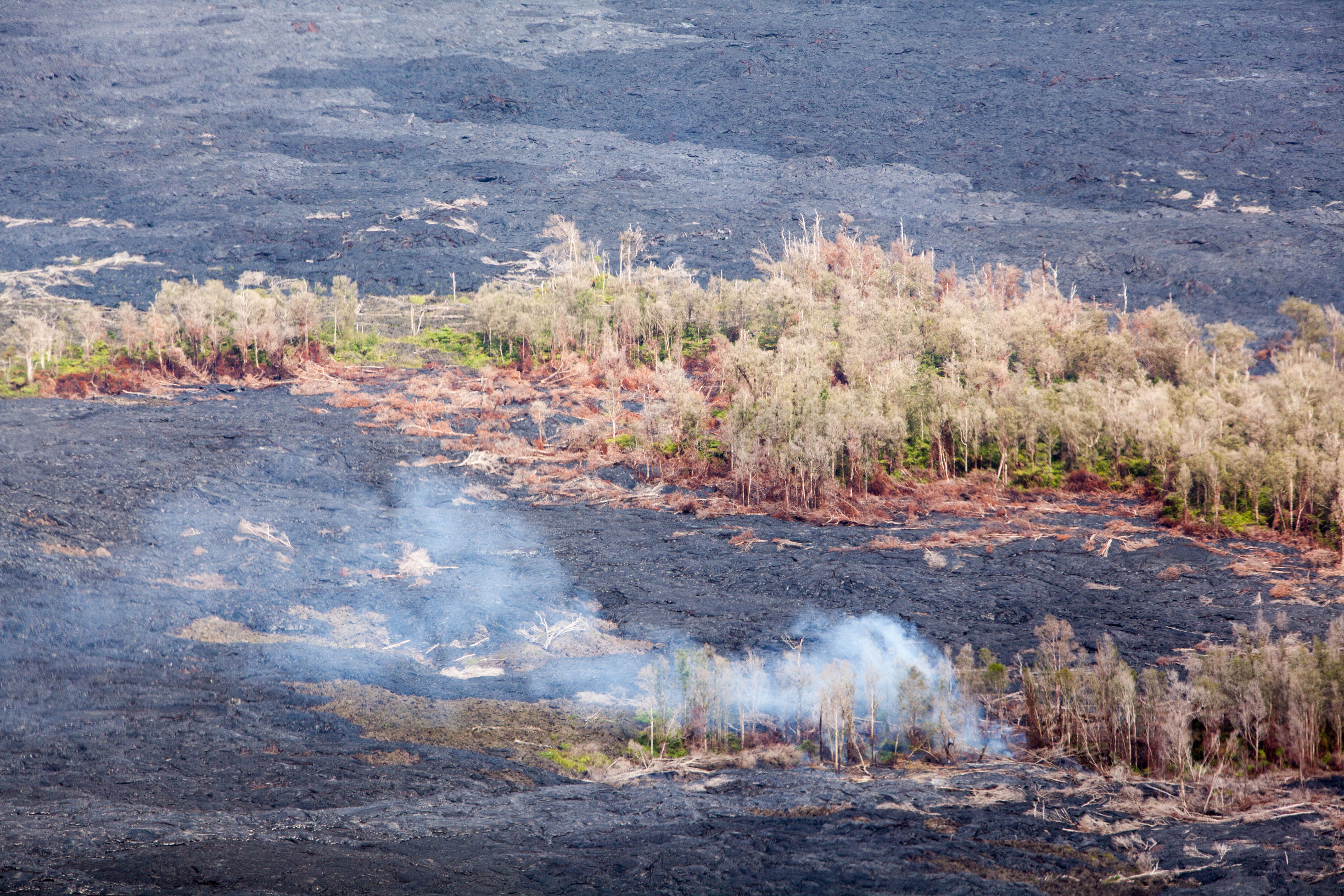 Lava flows are common, spilling across the island and creating huge lava fields - at first sight, a bad place to live for a cane toad! Photo by Terri Shine.

So in June 2015, exactly 80 years after toads left Honolulu on their way to Australia, TEAM BUFO migrated in the opposite direction - to set up an ambitious 3-month study of cane toads, so we could compare the Hawai'ian animals to the same species in Australia.

It was a well-planned operation. One team went to the island of Oahu to catch toads, another to Honolulu to do the the same, and a third to "the Big Island" (Hawaii) to set up a field laboratory at a yoga retreat we were renting outside of the town of Hilo. So we were able to sample toads from three islands, and bring them all back to Hilo to study them. 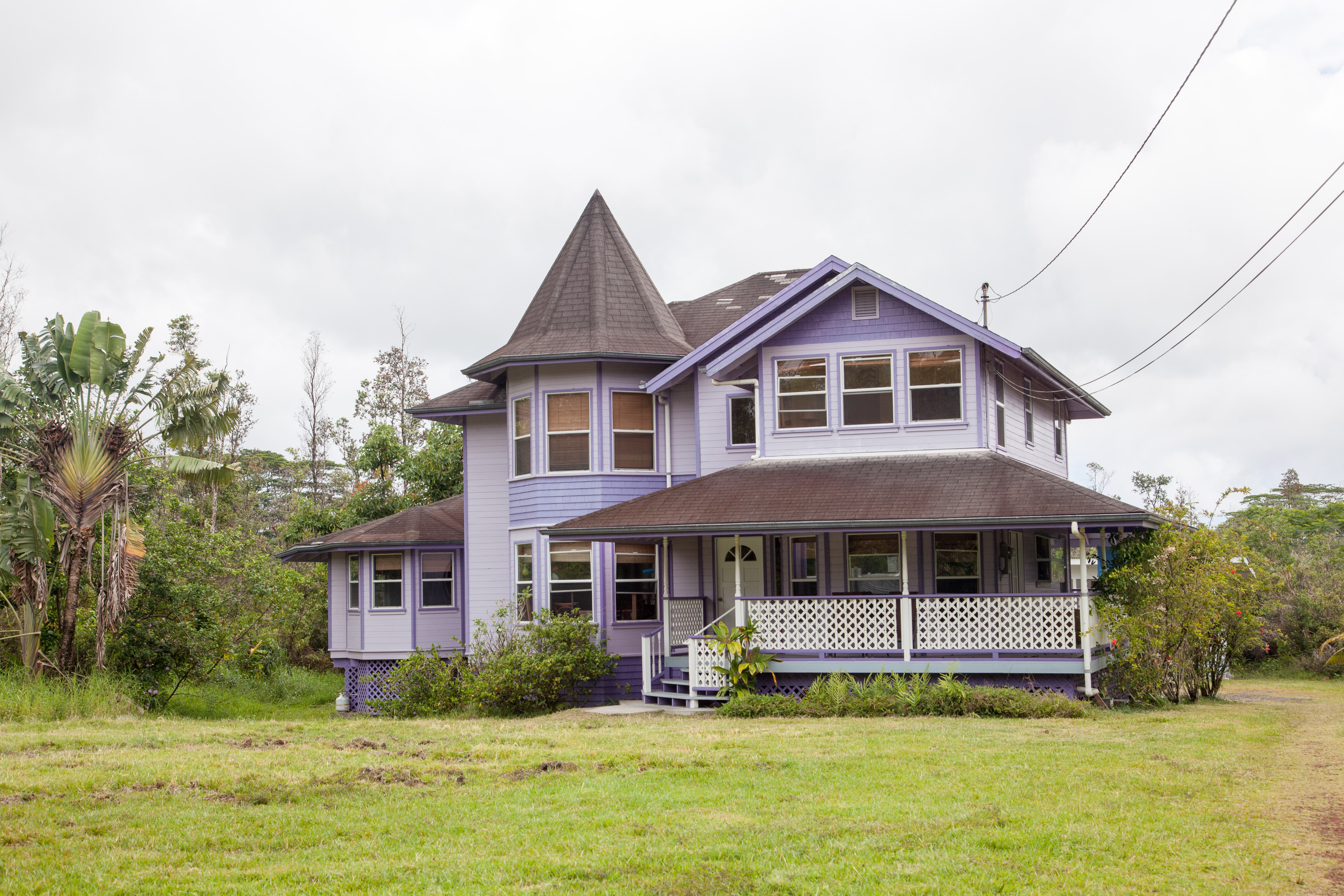 This yoga retreat near Hilo became "Toad Hall", the base of our operations for three months. Photo By Terri Shine. 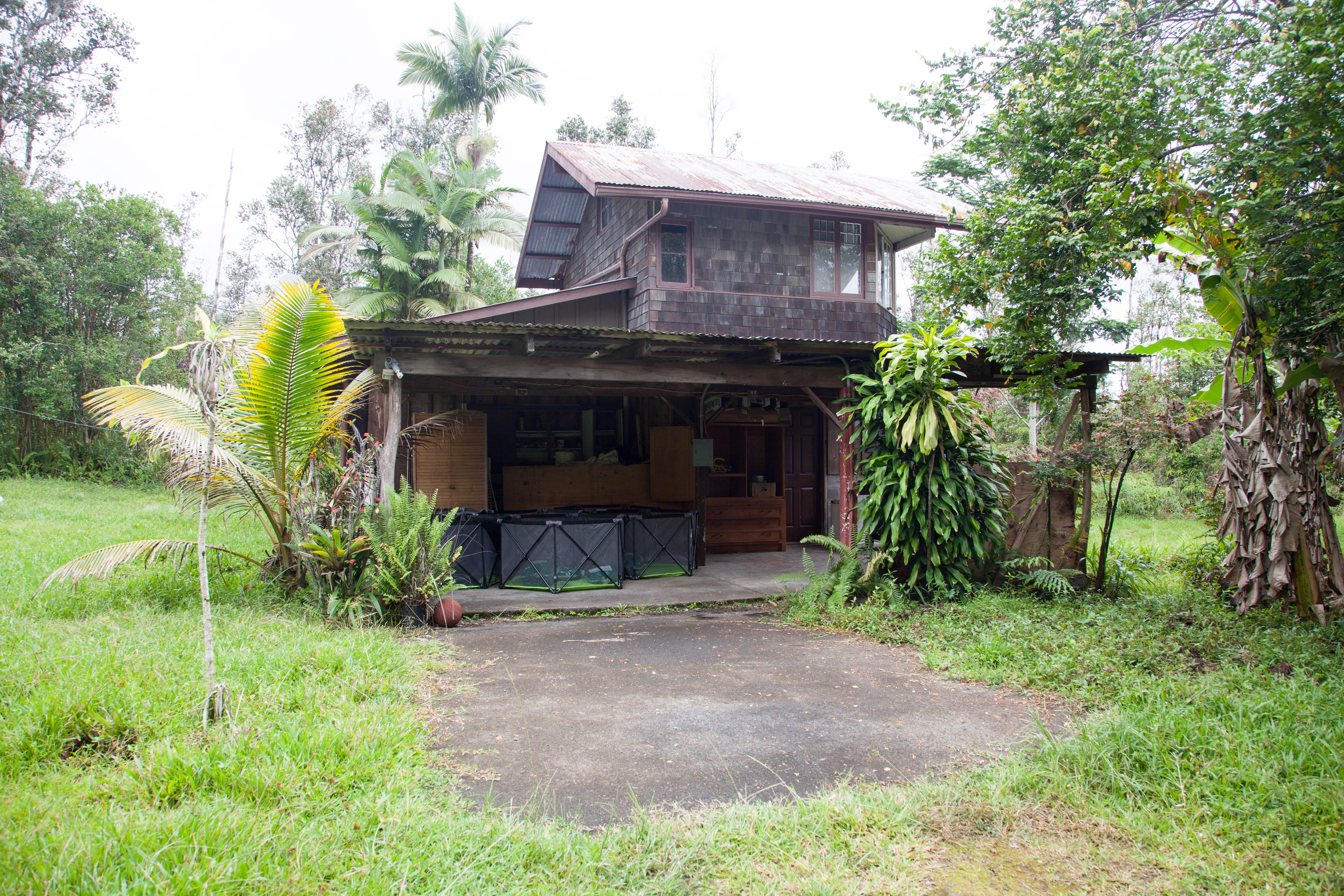 This small annex to the house - the Ohana - was used for accommodation and experiments as well. Photo by Terri Shine. 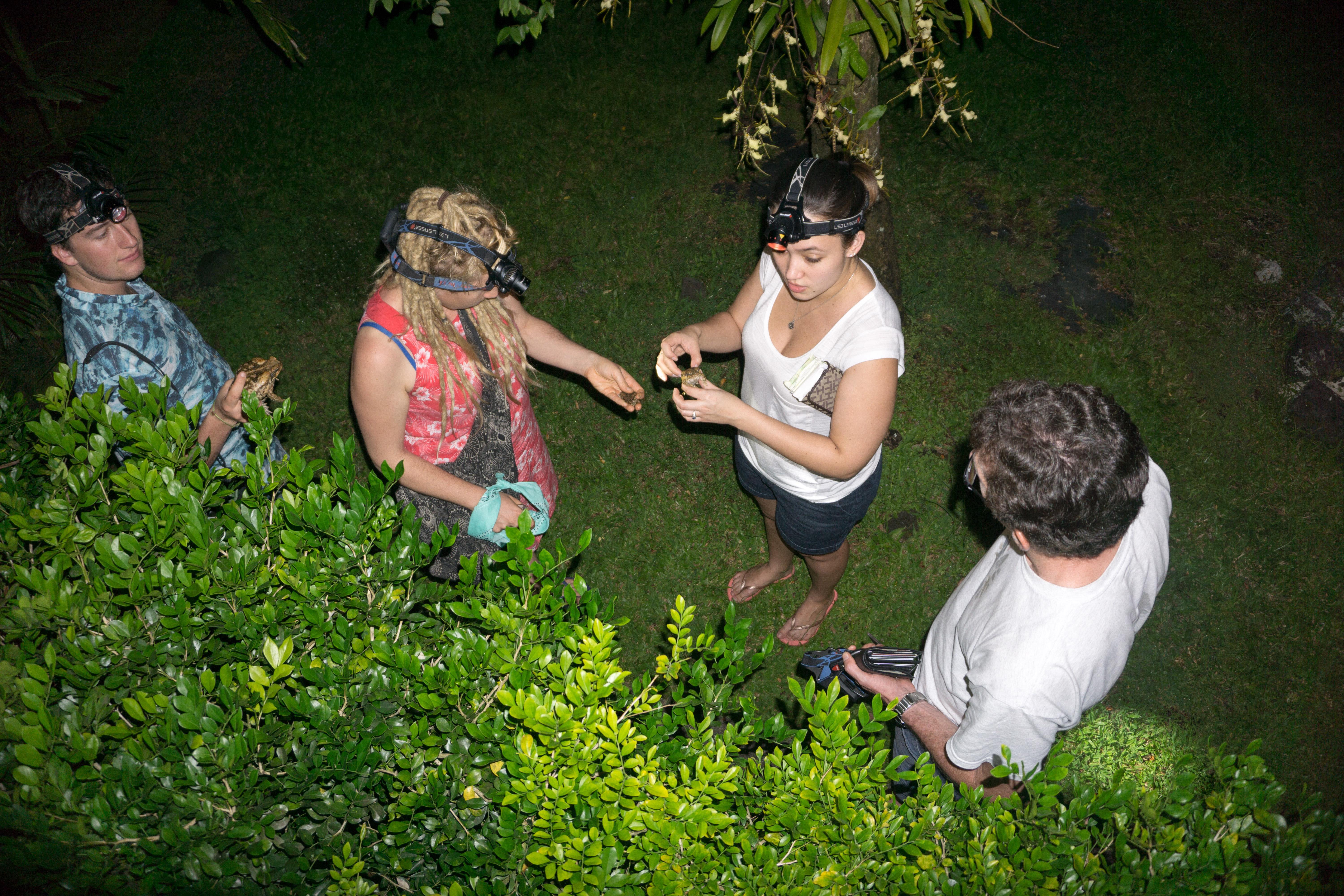 Teams spread out across three Hawai'ian islands to catch cane toads and bring them back to our field laboratory. 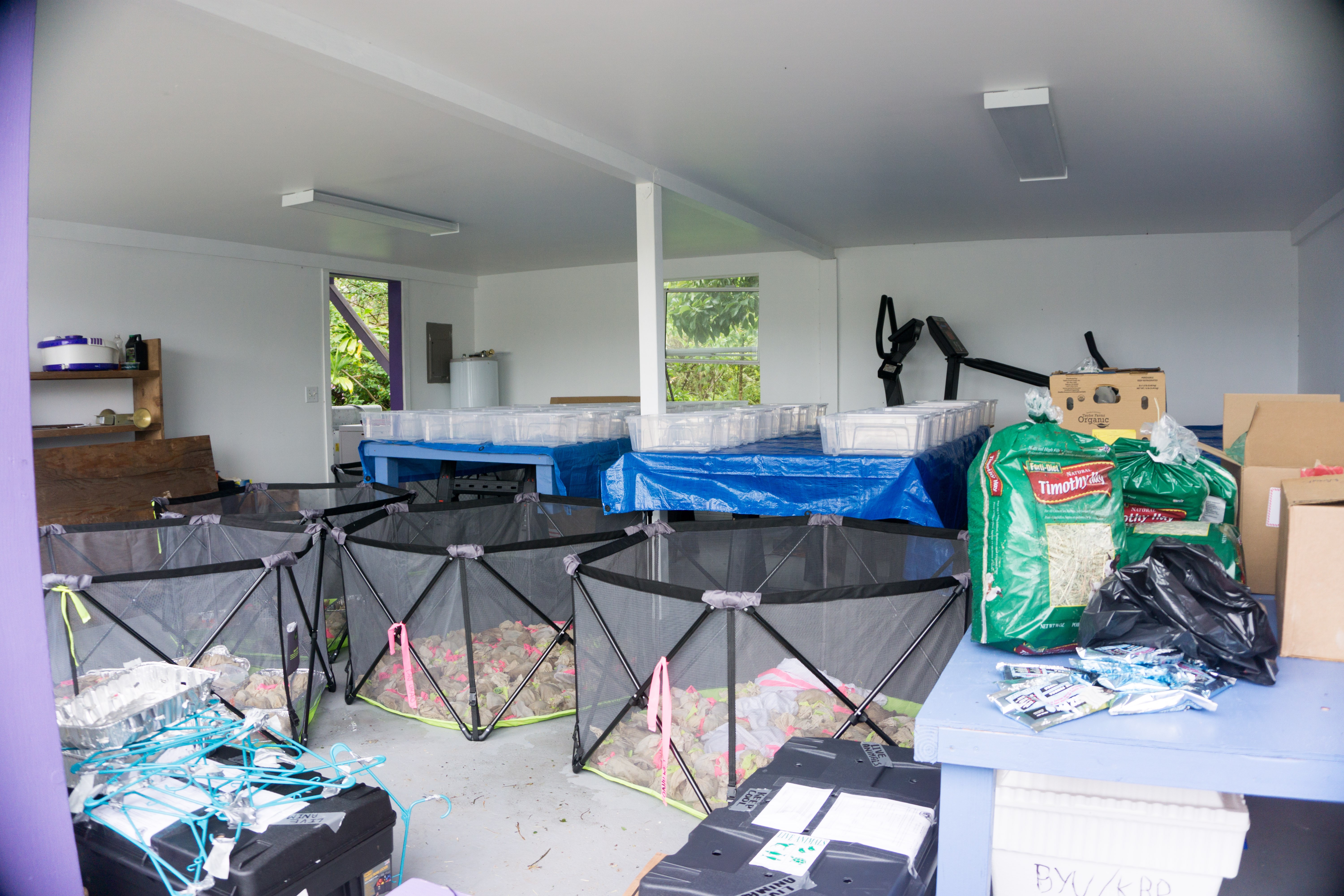 Unpacking bags of toads, setting up enclosures ... it was a frantic time to ensure that the toads we had captured on different islands were all soon in comfortable cages. Photo by Terri Shine. 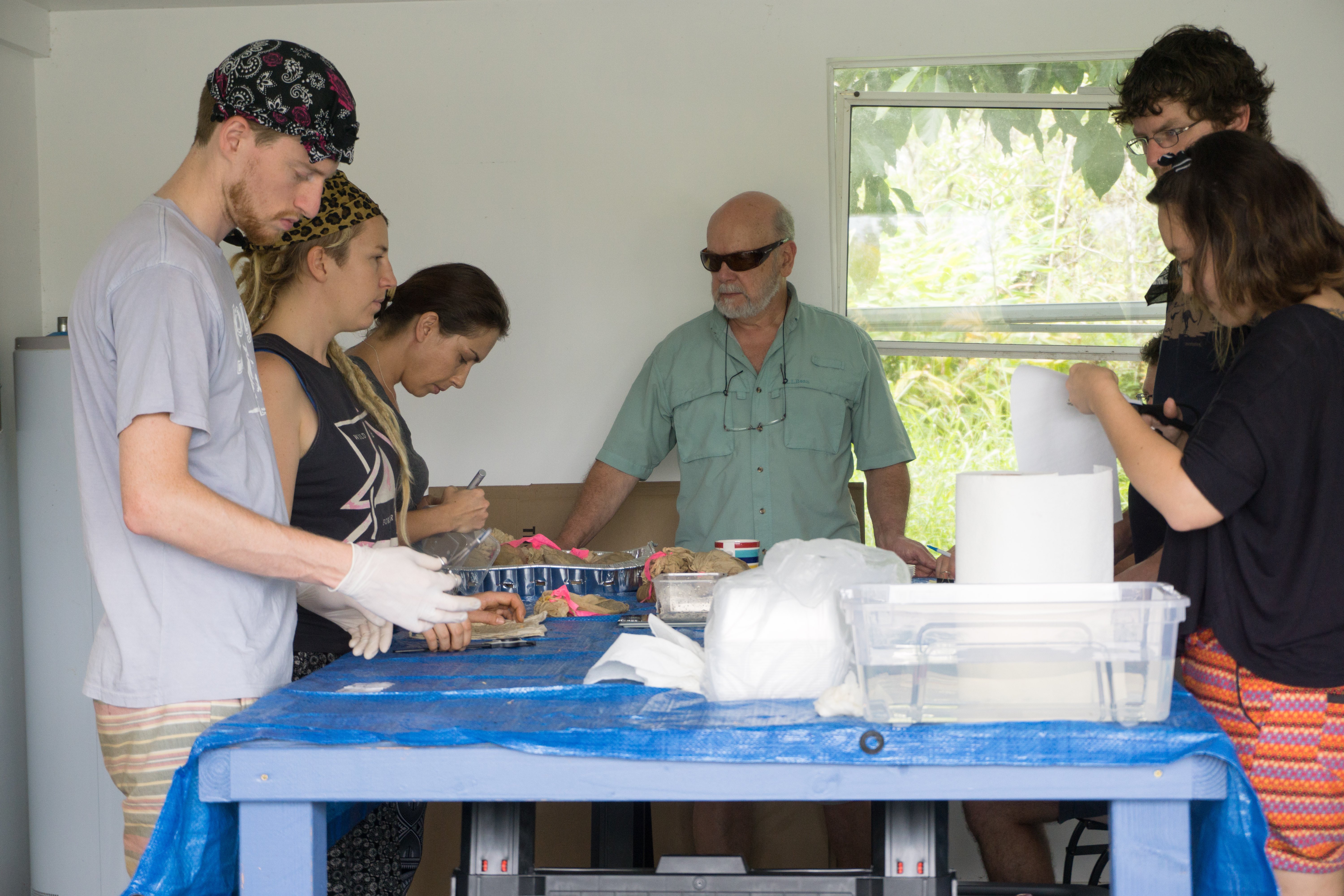 It was a marathon effort to individually measure and mark hundreds of newly-collected cane toads. Photo by Terri Shine.

Hawai'i is volcanic in origin, with steep mountains in the middle of every island. So the weather is really different on the windward side (where clouds sweep in, and rain is common) than the leeward side (where it rarely rains, because the mountains block the clouds). So we sampled "wet" and "dry" sides of each island as well. 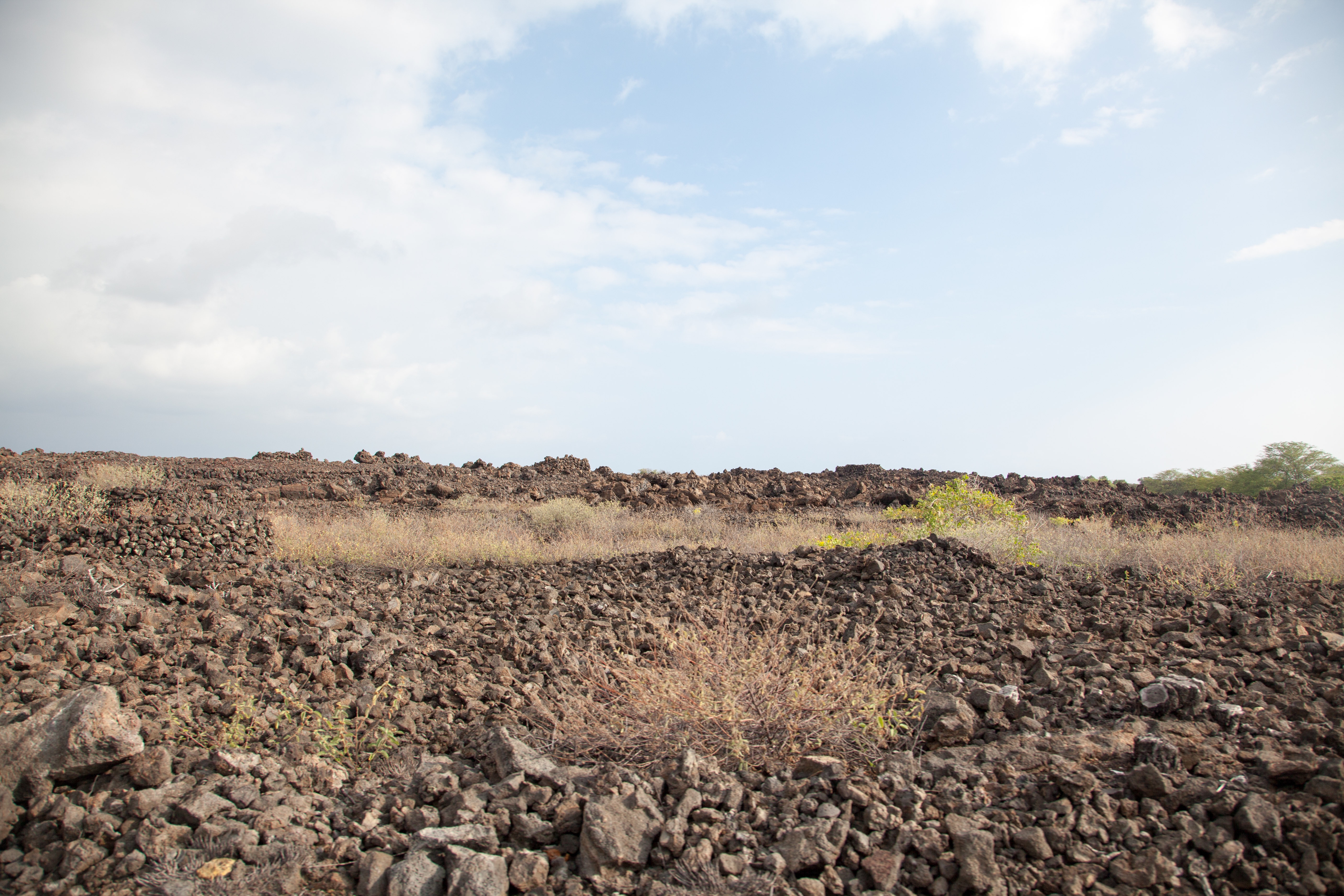 Although the "wet side" of each Hawai'ian island is covered in lush rainforest, the "dry side" is like a desert.

Photo near Kona by Terri Shine.

In 1932 and following years, cane toads were released everywhere that sugar cane was being grown in Hawai'i. The cane-growers hoped that the toads would control beetle pests - the same reason that toads were later brought to Australia. But the sugar cane industry has largely ended, leaving pockets of toads scattered across the islands.

In "dry side" sites, the only places that cane toads can survive are lush golf courses in among the lava fields. As is common across their worldwide range, the toads in these areas rely on people to provide water and insects. 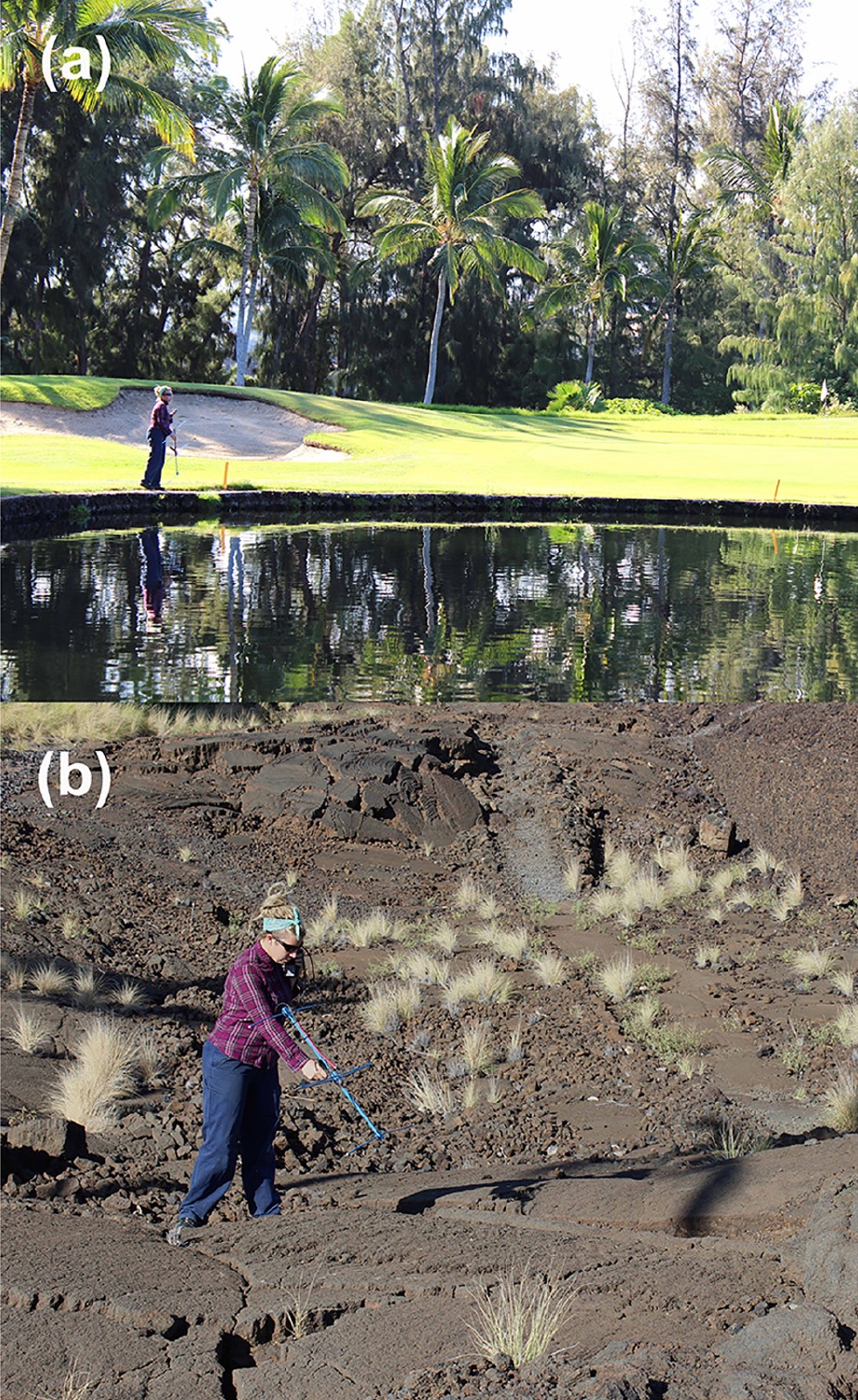 On the "dry side" of each Hawai'ian island, the landscape is parched and dry. Our radio-tracking showed that the toads use the water and bugs available in well-watered golf courses at night, and shelter in cracks in the adjacent lava fields by day. Cane toads are flexible! Photo by Terri Shine. 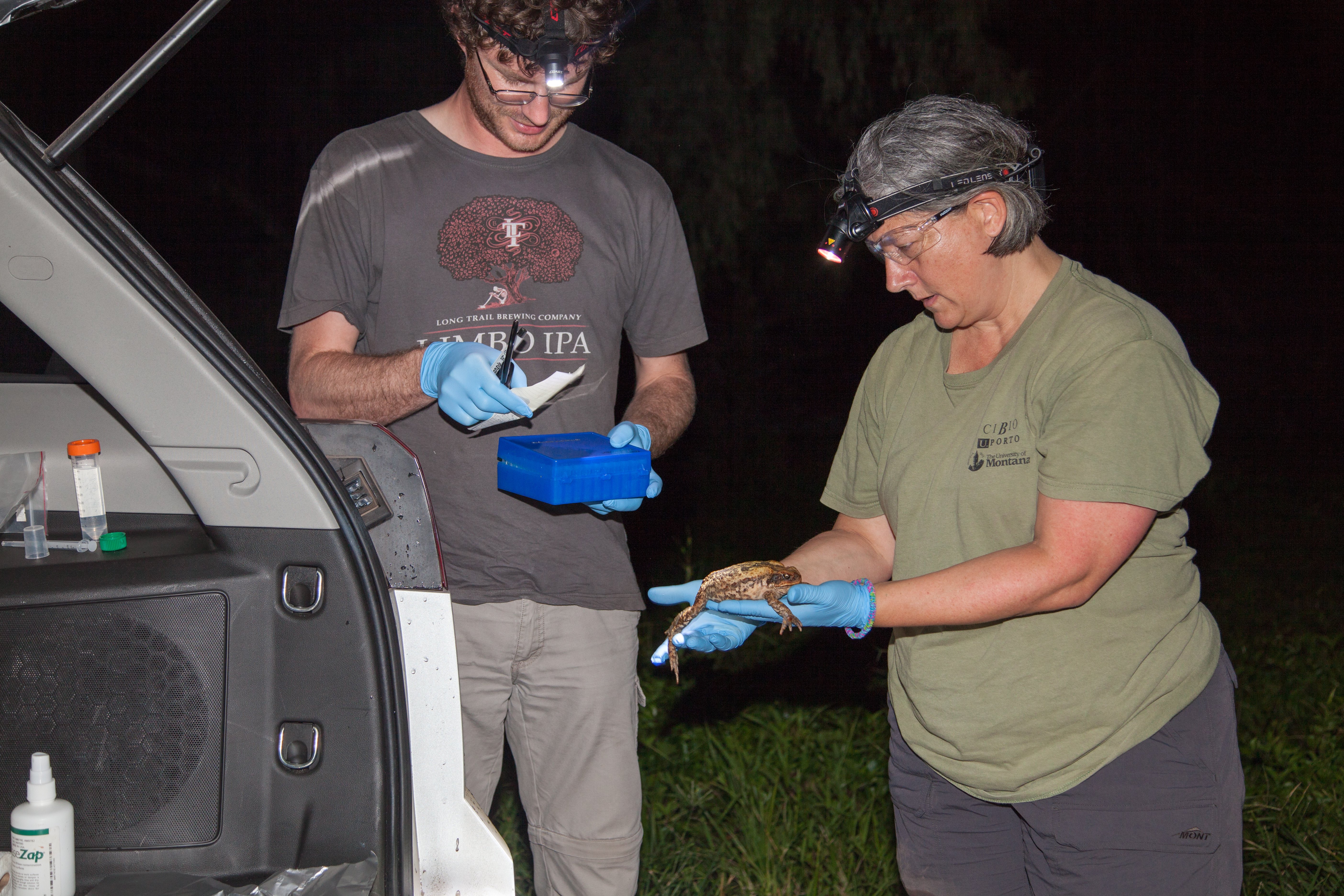 Importantly, we were able to obtain tissue samples for genetic analyses, so we can compare the genetics of cane tods in Hawai'i to those in Australia. Here, Simon Ducatez and Lee Ann Rollins are preparing to dissect a newly captured toad (that has been humanely killed) to obtain tissuses for gene-expression analyses. Photo by Terri Shine.

In the end, the results were clear. Cane toads in Hawai'i are very different in many ways to the same species in Australia - even though the Aussie toads were founded by 101 colonists from Hawaii not much more than 80 years ago. Like their ancestors in South America, the Hawa'iian toads are stay-at-home, short-legged animals. There is no benefit to travelling long distances, and indeed it would be a disaster on the "dry side" of the islands, where patches of moist habitat are scarce because the porous lava does not retain water. If you leave home, you may not find anywhere to spend the next day.  So the toads in Hawai'i have evolved to live quiet lives.

That's a strong contrast to Australia, where the toad invasion had room to move - all the way from the east coast top the west coast - right across the continent. And the evolutionary pressures unleashed by that long period of range expansion created super-mobile toads, as we have discussed in other pages on this website ((see INVASION).

In summary, our Hawai'ian studies reinforced the evidence for rapid evolutionary changes in invasive species.

And Hawai'i is a beautiful place, and it was enormously enjoyable! 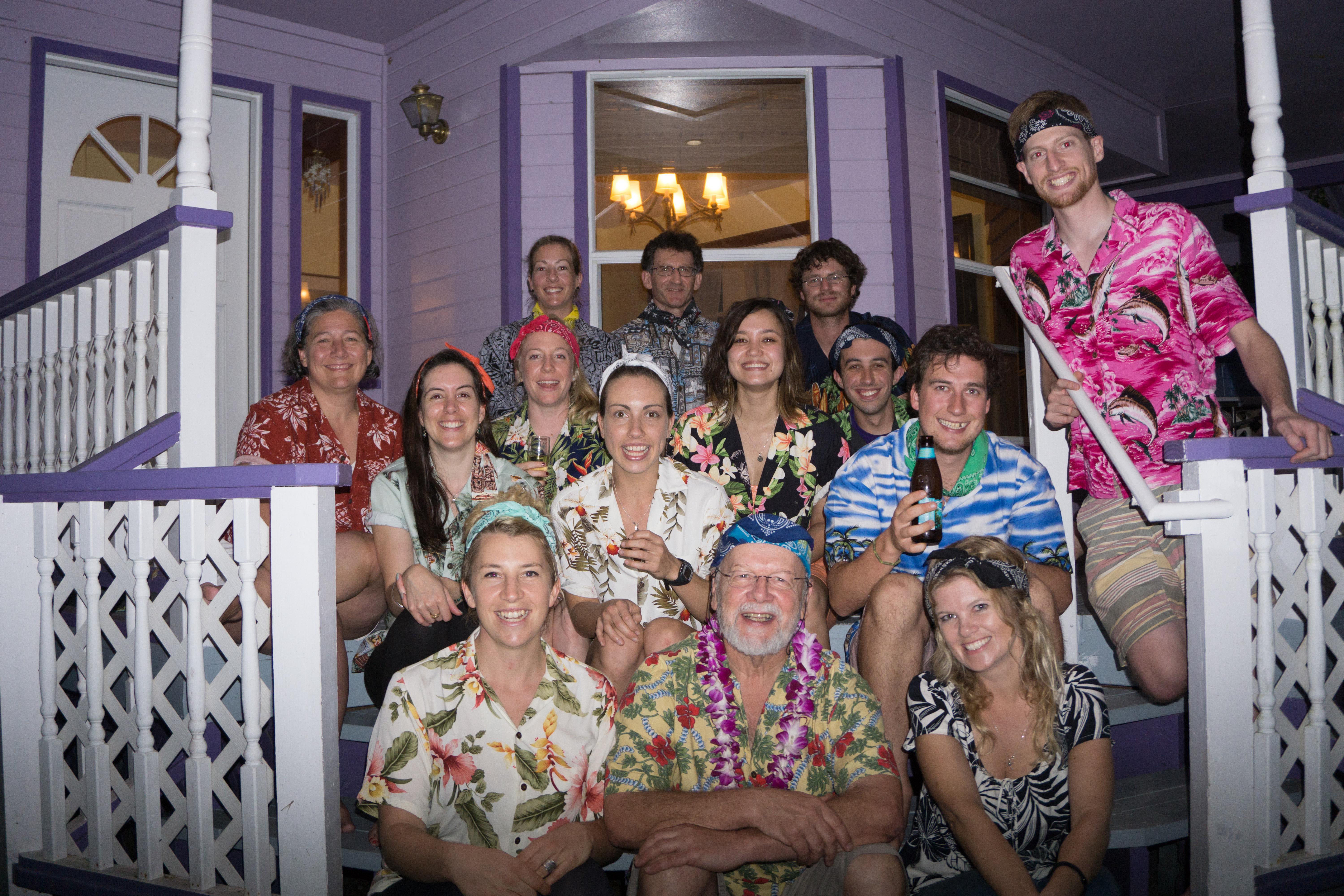