What’s the difference between a toad and a frog?

The name “toad” is usually reserved for a particular type of frog: one that belongs to the family Bufonidae (also called “true toads”). They tend to be stumpy in shape and warty in appearance, very unlike  sleek smooth treefrogs and waterside frogs. But there is an enormous diversity of “frogs and toads”, and many species show a mix of the characteristics that we usually associate with the words "frog" and “toad”. Some of these animals are called toads, some are not. So it’s a bit arbitrary. In our opinion, toads are just a special type of frog.

The “true toads” are widely distributed across many parts of the world, including the Americas, Africa, Asia and Europe. But because Australia is an island, and the toads can’t cross large saltwater barriers, Australia was toadless until the cane toad was brought to our shores in 1935. 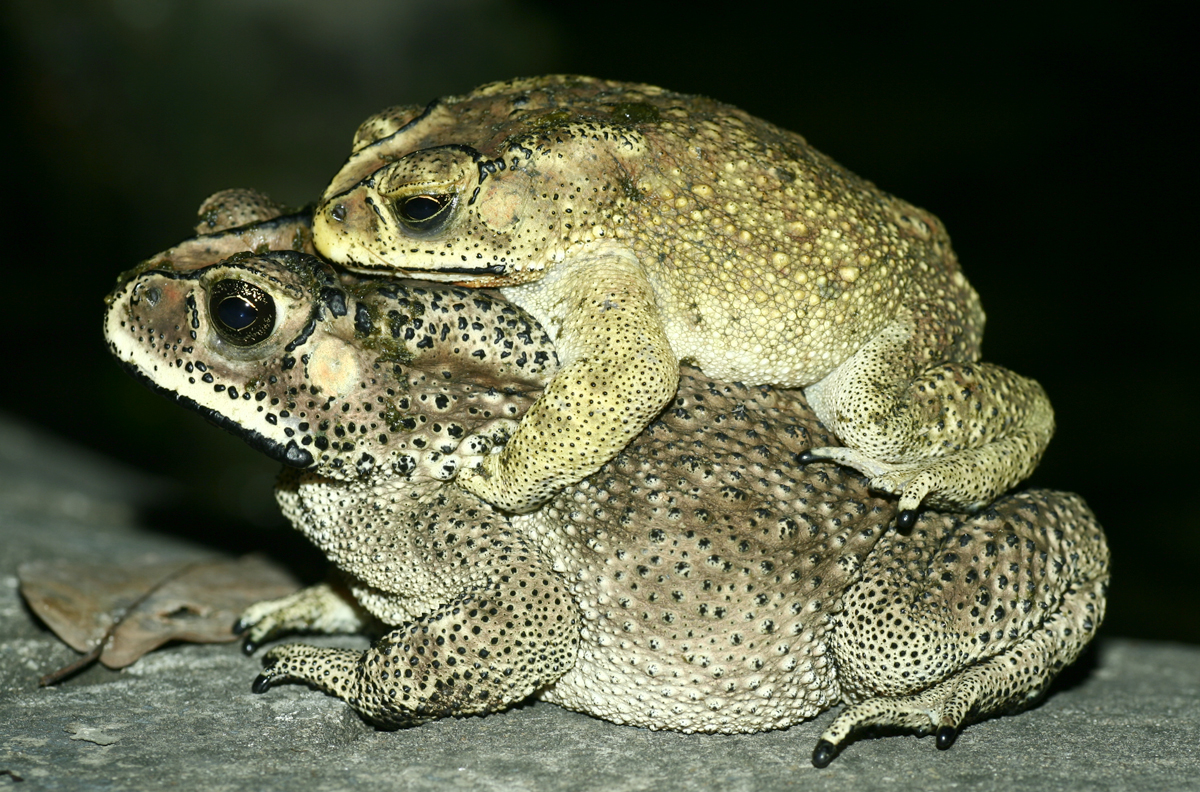 These friendly Asian Black-spined Toads are a lot smaller than cane toads, but it's easy to spot the family resemblance to their larger relatives. All around the world, most toads are squat creatures with short legs and warty skin. Photo by Ruchira Somaweera.

The name of the toad

Every species has its own scientific name, and most research papers call the cane toad “Bufo marinus”. The first part of that name (Bufo, the genus) tells us that this is a “true toad” (in technical parlance, a member of the Family Bufonidae). The second part (marinus, the species) is the result of a mistake - early naturalists believed a myth that the toads could tolerate "marine” (saltwater) conditions. They can’t, but scientific names don’t get corrected because of this kind of mistake.

But other kinds of mistakes CAN be corrected, and that has happened to the toad’s genus name. Scientific papers now call the cane toad Rhinella marina, not Bufo marinus. New information about the DNA of toads clarified evolutionary relationships among species (who is related to who, and how closely). As a result, researchers divided the original genus (Bufo) into several smaller groups. The DNA evidence tells us that the cane toad belongs to a group of large South American toads that can be given its own genus name – Rhinella. That was disappointing to us, because we took our title "TEAM BUFO" from the earlier (and now obsolete) scientific name. But we've stubbornly refused to change our title, because we think "TEAM RHINELLA" sounds awful.

Research continues to throw up new information about toads and their relationships. In 2018, for example, researchers in South America discovered that there are actually two different kinds of cane toad – one from west of the Andes and one from east of the Andes. The western species is now called Rhinella horribilis, and the name “Rhinella marina” is applied only to the eastern animals. The eastern toads are the ones that were brought to Australia.

The size of the toad

No matter what you call them, cane toads are among the biggest frogs in the world. Although most female toads grow to only about 12 cm (5 inches) long (and males are smaller), there are plenty of outsized animals. In our own experience, these can crop up anywhere that cane toads occur - in the native range in South America, in Hawai'i, and in all kinds of parts of Australia. Catch enough toads, and you are likely to finally encounter a big female weighing more than half a kilogram.

One toad that was caught in the Northern Territory, dubbed “Toadzilla” by the media, was 20.5 cm (8 inches) long and weighed 861 g (1.9 lb). Media reports described Toadzilla as “the size of a small dog”, but we haven’t seen a dog that small! With cane toads, exaggeration is the name of the game. Dog-sized Toad Found in Australia.

The food of the toad

Despite their large body sizesg (at least as adults), cane toads mostly eat small prey like ants and beetles. However, a hungry toad will eat much larger items, such as small snakes or baby birds (if it can catch them). Toads often gather in places where there are lots of edible bugs, such as around artificial lights at night, or even around the smooth white bark of a tree that reflects light at night and so, attracts bugs. Mostly toads ambush their prey, waiting patiently in an open area until a beetle or moth moves nearby, then grabbing the tasty morsel. 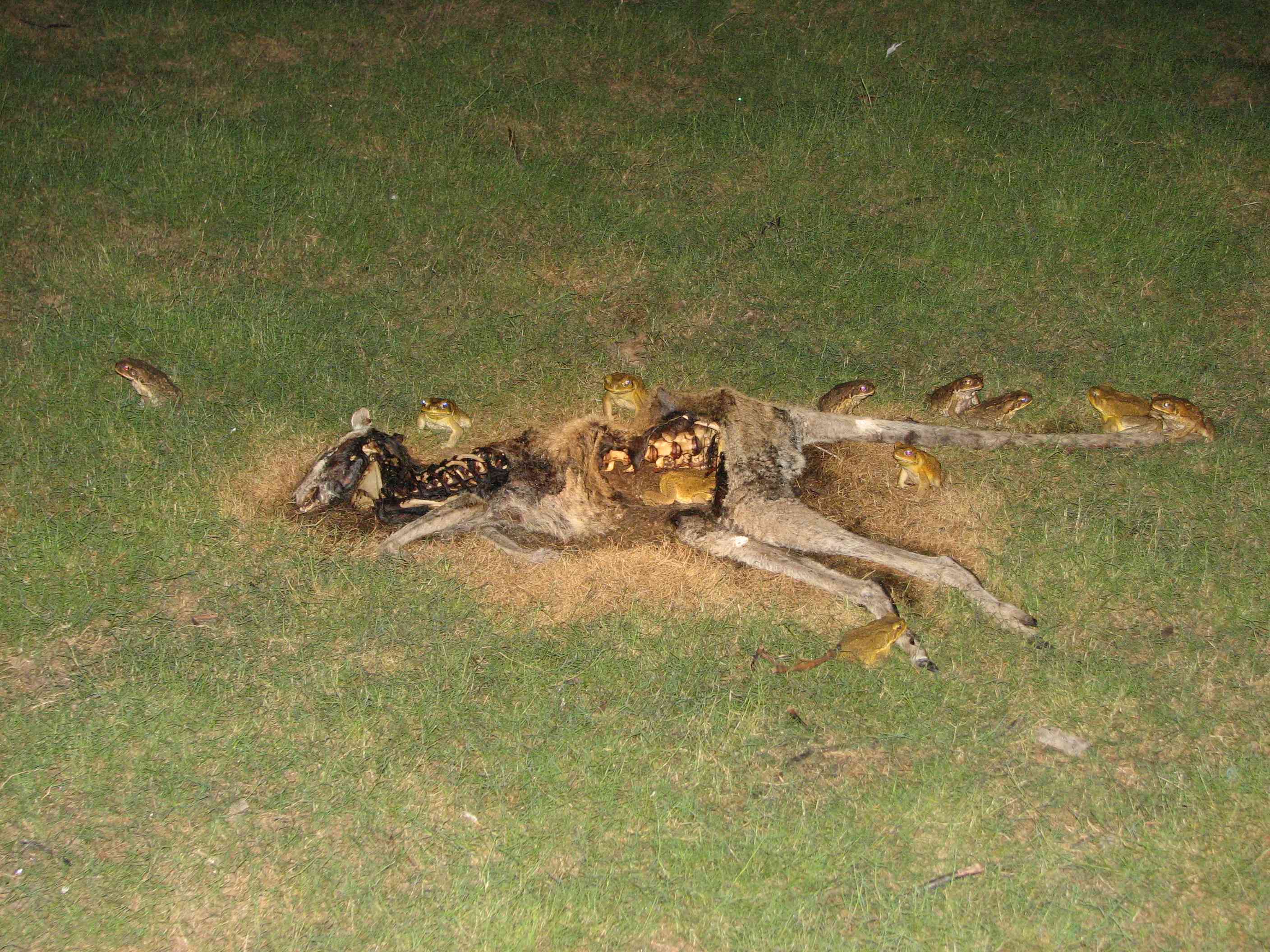 Anything that attracts edible insects - like this road-killed wallaby - will be a magnet for cane toads. Photo by Michael Crossland.

The enemies of the toad

Toads produce very powerful poisons, that can kill any large animals that try to eat them - unless those animals belong to species that originated in an area where toads occur, and so have evolved the ability to tolerate the toads' poisons.  In the native range of the cane toad in South America, many types of mammals, birds and reptiles eat these poisonous amphibians without problems. But because there are no native toad species in Australia, some of the predators that evolved in Australia are very sensitive to toad poisons. As a result, many crocodiles, goannas, snakes, bluetongue lizards and quolls are killed when toads invade an area in Australia.

But that still leaves some predator species that aren't badly affected by the toad's poisons. Those invulnerable species happily eat toads. That group includes a few snakes, many birds, and most rodents (rats and mice). Also, many invertebrate animals (like spiders and ants and water-beetles) can eat young toads or tadpoles without suffering any ill-effects.

So even in Australia, cane toads have plenty of natural enemies. Some calculations suggest that of every thousand cane toad eggs that are laid, an average of much less than one toad survives to maturity.

Freshwater crocodiles can't tolerate the cane toad's poison, so this Freshie would die if it ate the toad. But most crocodiles detect the poison and release the toad after a while, rather than swallow it. The water washes away the poison and so the predator survives, and learns not to eat cane toads in future. Photo by Greg Brown.