Most Australians don't like cane toads! And in a lot of cases, that is a very strongly held opinion! So, people talk a lot about "controlling toads". Unfortunately, they rarely explain exactly what they mean by "control". Does this mean eliminating all toads? We don't think anybody who has looked seriously at the ecology of cane toads really believes this is possible. So how much do we need to reduce their numbers? To 50% of current levels, or 10%, or 1%? The answer to that question makes a big difference to how we would need to go about the effort.

A lot of people would say that the key to effective control is to reduce the ecological impact of toads. But again, "impact" can mean different things to different people, and mean different things for different native species. For big predators that cover large areas and are good at finding their prey, even a tiny number of toads in an area may be enough to guarantee that the predator will find a toad - and if so, even a massive reduction in toad numbers wouldn't help that predator.

This doesn't mean that we shouldn't try to control toads, just that we need to think carefully about what we really want to achieve in terms of "control" and "impact reduction".

Below, we talk about some common misconceptions about toad control.

A few years ago, a spokesman for a community “toad-busting” group got publicity all over Australia – and in a lot of other countries – by saying that one of the local Darwin frogs could eat toads and their tadpoles with no ill effect. It’s a great story, but it’s wrong. We’ve done research on the Dahl’s Aquatic Frog – the one that is supposed to chomp down toads without problems – and the sad fact is that they are just like other native frogs, and just as likely to die if they eat a toad. Fortunately they quickly learn to leave toads alone, so that the frogs remain common even after toads invade.

The "toad-eating frog" story is a good example of the power of myths. It wasn't really the community spokesman's fault - he said from the outset that he only had a few observations, and suggested that scientists should check out the story to see if it was true (we have, and it wasn't). Instead, the problem was the way the media latch onto a good story, and start treating it as fact even when the evidence is weak. 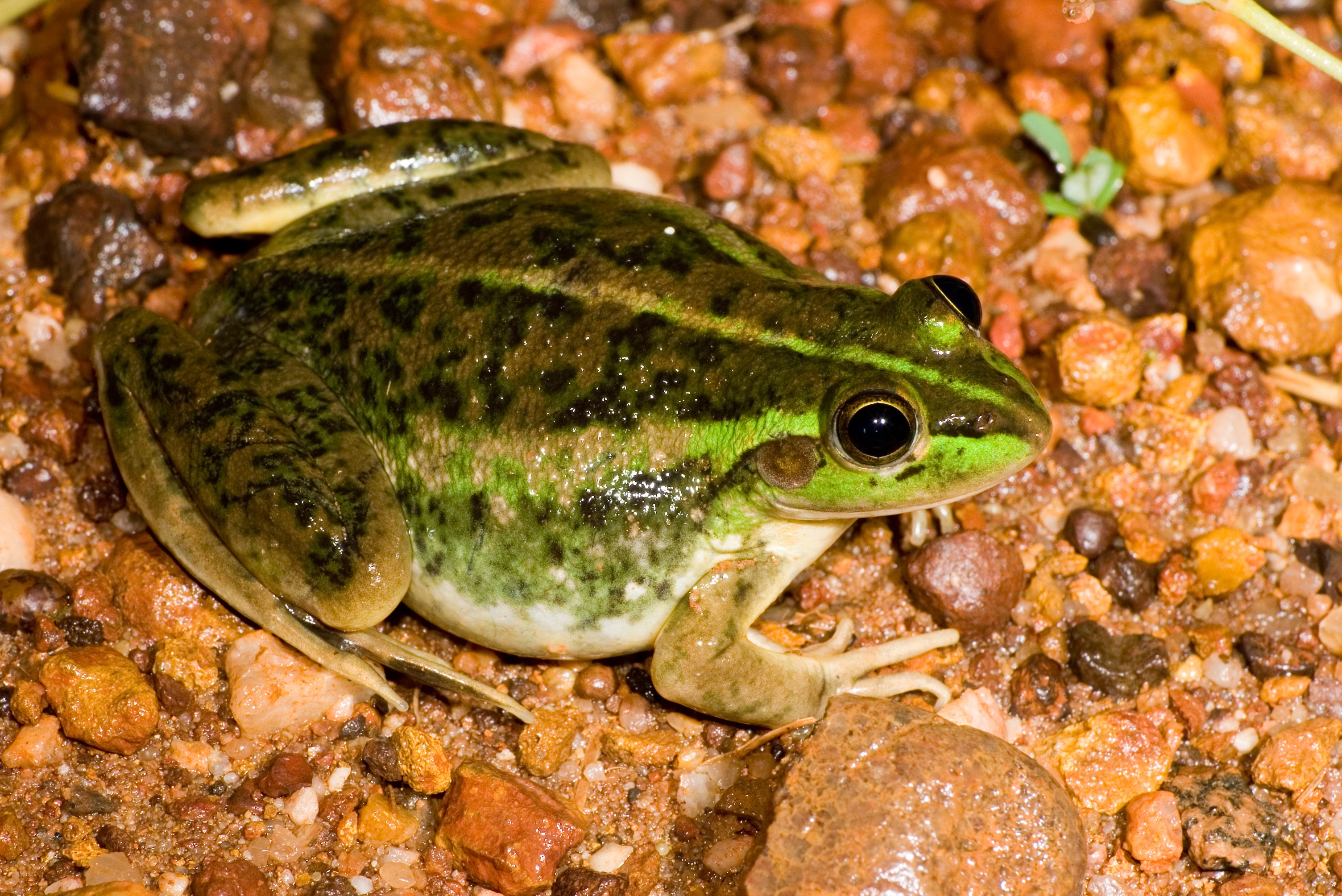 Dahl's Aquatic Frog was supposed to be able to eat cane toads and survive - but it can't. Photo by Michael Crossland.

Community groups have put in huge amounts of volunteer effort at hand-collecting toads, trapping them, building fences and so on. And state governments also have put a lot of money into those activities. We admire the enthusiasm and commitment of the community groups, whose efforts have been phenomenal. However, even those groups (or at least some of them – they disagree about a lot of things!) admit that physical removal can never stop the toad invasion.

The reason is simple mathematics – to reduce the number of toads in an area, you have to remove them quicker than they can replace themselves. That isn’t too hard if you are dealing with an animal that reproduces slowly – like a buffalo or a camel – but unfortunately, cane toads reproduce at an amazing rate. They reach maturity in just a few months, and a female can produce up to 30,000 eggs in a single clutch. So even if you catch 98 out of 100 toads around a pond, the two you missed can produce 30,000 new toads the next night – so even allowing for many of the eggs and tadpoles dying, you may have ten times as many toads there next week as you had before you took the other toads away! And because toads compete with each other at all life-history stages, the more you take away the better it is for the ones left behind. 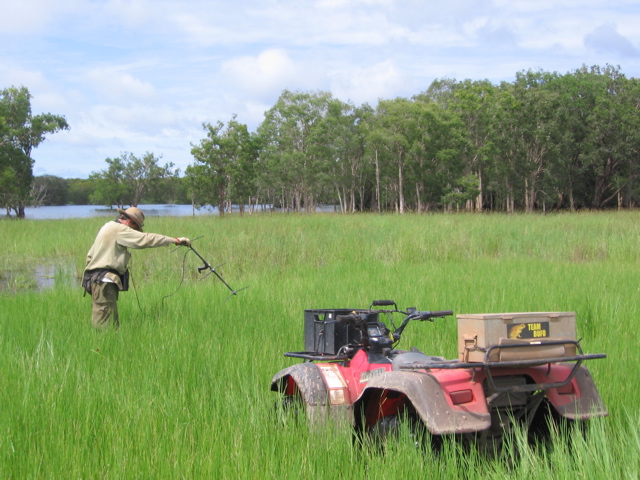 There has been a lot of guesswork about cane toads and where they go - but radio-tracking them is the only way to find out. In this photo by Greg Brown, Ben Phillips is searching for a toad and its transmitter.

So, to have any longterm effect on cane toads, we’ll need some way to stop them from breeding. To give them their due credit, most of the community groups understand this, and are just trying to keep toad numbers low until scientists can find a better way to control these troublesome pests. It's thus exciting that we found a way to eradicate cane toad tadpoles from spawning ponds (see "tadpole control" page) - finally, toad control (at least at a local level) may be achievable!

Fortunately, things are even more encouraging at the southern edge of the toad's expanding range, in northeastern New South Wales. The toads in that area are spreading only slowly, with a patchy distribution. This provides an ideal opportunity for intensive control efforts, because toads are less abundant and if you clear toads out from one area, they may not invade again for quite a while. And sure enough, research by Dr. Matt Greenlees has confirmed that in these cooler sites, hand-collecting can make a big difference.

So although picking up toads  doesn't have much effect in the tropics, it can be a useful strategy in cooler regions of Australia - especially when combined with tadpole-trapping. 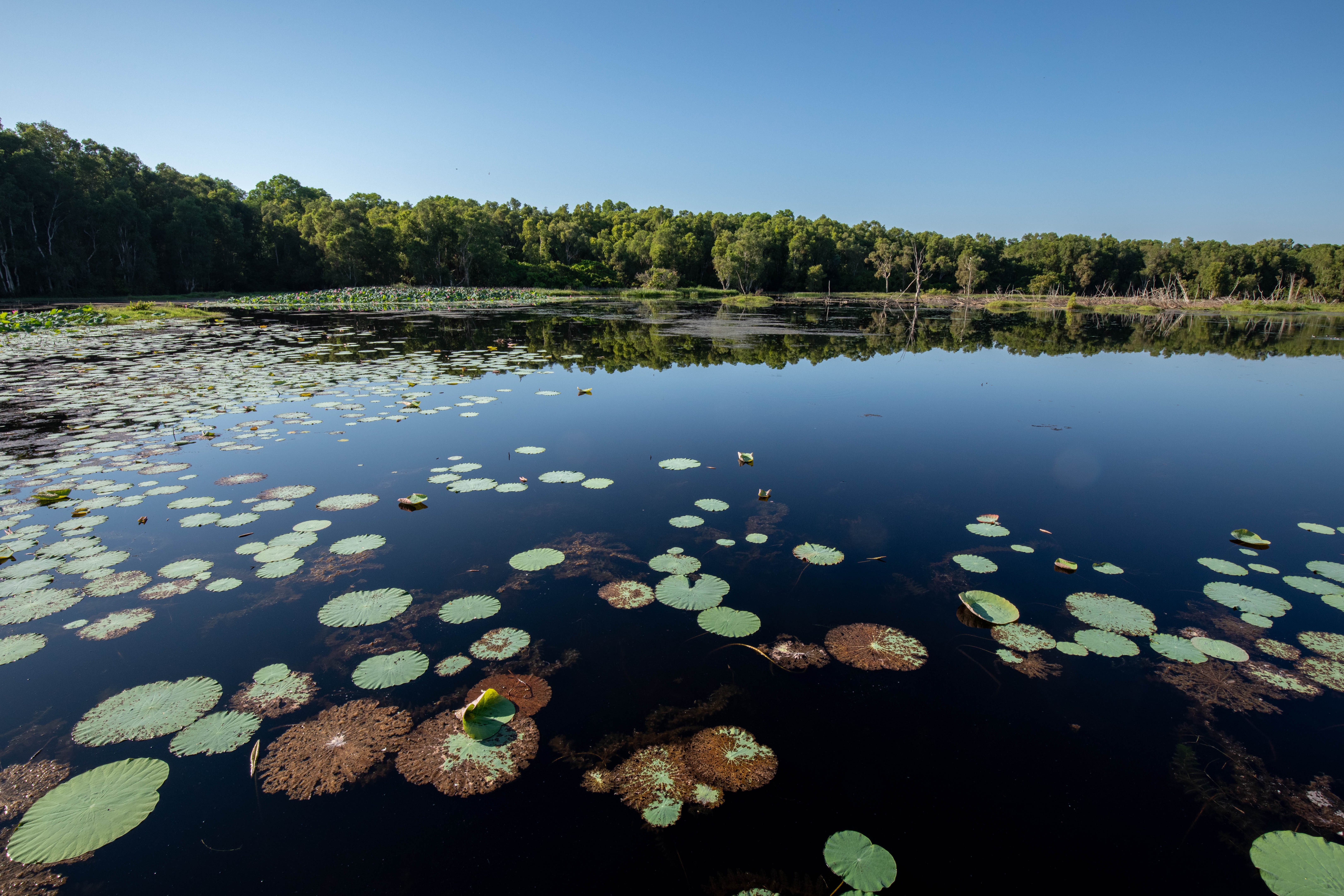 Tropical wetlands are huge, hard to access, and contain lots of hiding places ... it is simply impossible to hand-catch or trap EVERY adult cane toad around a tropical billabong. Photo by Terri Shine.

Even if we can’t stop the toads by hand-collecting, at least we can slow down the invasion front

Bad news. Our surveys of the toad invasion front show that it’s moving just as fast over the last few years as it did beforehand, despite enormous effort at toad collecting by community groups and the government. What’s gone wrong? The problem lies in the behaviour of toads at the invasion front. We captured the first toads to arrive at Fogg Dam and strapped radio-transmitters to them to see where they moved. Fogg Dam is wonderful toad habitat, so we expected the first arrivals to settle down and start breeding. They didn’t – instead, they sprinted right through our study area and just kept going. Every toad traveled further and faster than we thought possible – often going more than a kilometre in a single night. And they travelled those kinds of distances every night that it was damp. This is really bad news for “stopping the invasion” – any toad you miss (and you are bound to miss quite a few) will be kilometres past you within a few days. So, the rate that the front rolls on is not reduced even if you take out 90% of the toads. In practice, removal rates by methods like trapping and hand-collecting tend to be very low – for example, traps in our study area caught less than one in 20 toads that we knew to be in the area – probably closer to one in 50. 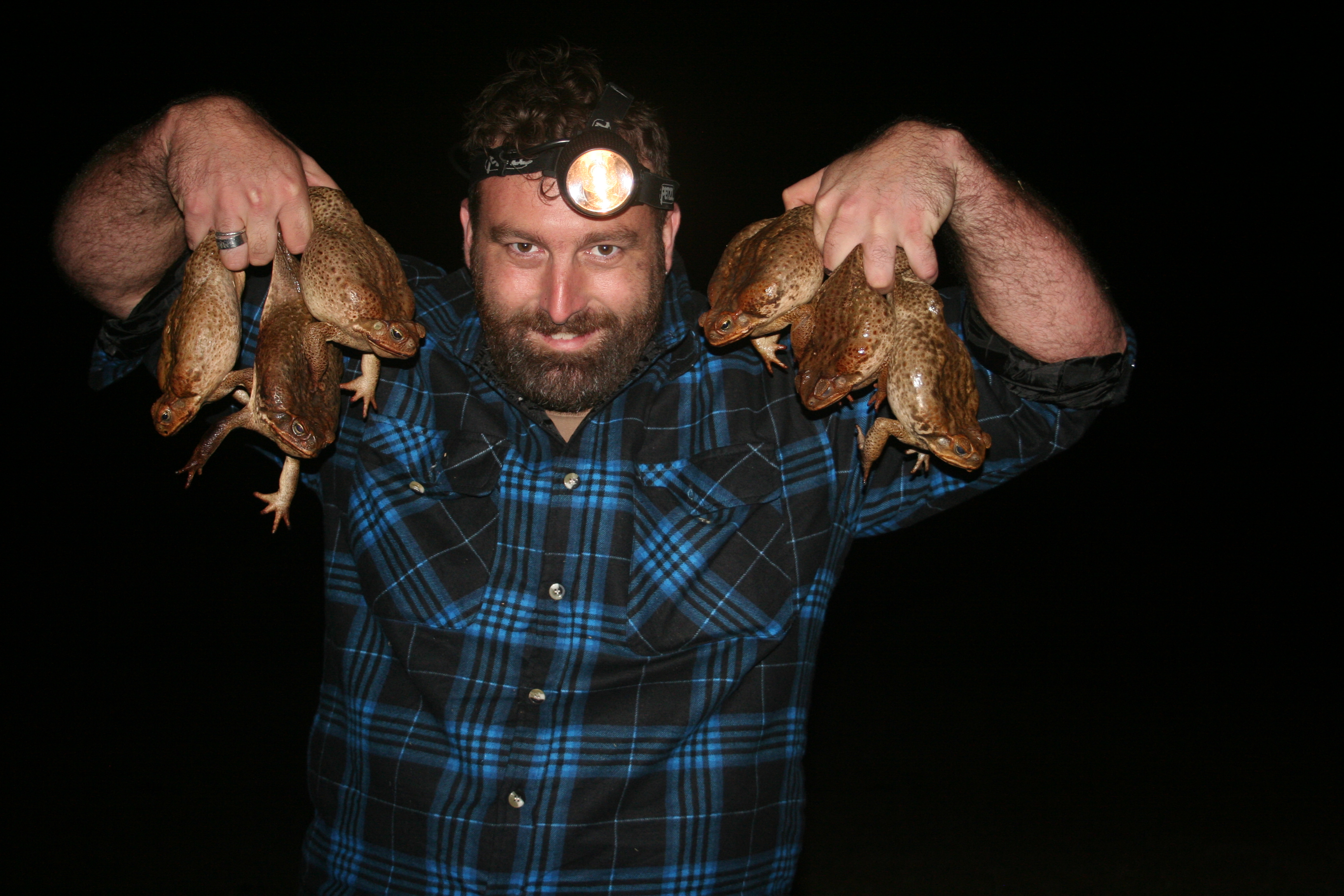 Toad-busting can be fun, and you can catch a lot of toads. That probably helps to reduce toad numbers in southeastern Australia, but it doesn't have much effect in the tropics.

Does this mean that all of that incredible effort by community groups has been a waste of time? Certainly not! First, there have been lots of spin-off benefits. For example, the public profile of environmental conservation and invasive species' effects on native biodiversity has received lots more attention than it would have otherwise. And "toad-musters" and the like have got lots of tropical residents off their couches, away from the TV, and out into the swamps so they can see their local environment firsthand. Co-operating to fight the threat of toad invasion has brought people closer together, and encouraged important dialogue between aboriginal Australians and other parts of the wider community.

Second, there's absolutely no doubt that a lot of toads have been removed from a lot of places. That removal may not have a long-term effect in some situations, especially close to the invasion-front during the wet-season, because the toads in that situation are moving so far and so fast that any local effects are soon swamped out. But toads don't move around much during the dry-season, and don't move around an awful lot at any time of the year in places where the colonizing front arrived many years before - so in those conditions, taking toads out of the ecosystem likely will have a longer-term effect on toad numbers and hopefully, reduce the invaders' impact on local fauna. We have detailed information about the impacts of "toad-busting" around Lake Argyle in the Kimberley, so we now know how long it takes for toad populations to recover from intense "toad-busting" efforts.

And as we said above, toad-busting can be far more effective in cooler climates than in the tropics. So we shouldn't give up on toad-catching - we just need to be sensible about where and when to do it.

One of our main aims with this website is to provide reliable evidence about cane toads in Australia, backed up by scientific research. We haven't put lots of details about that evidence on the main pages, but it's easy for you to get to it. If you want to explore a topic in more depth, just go to "Google Scholar" and put in the search terms that describe your topic. If you get stuck, you can ask us for help. 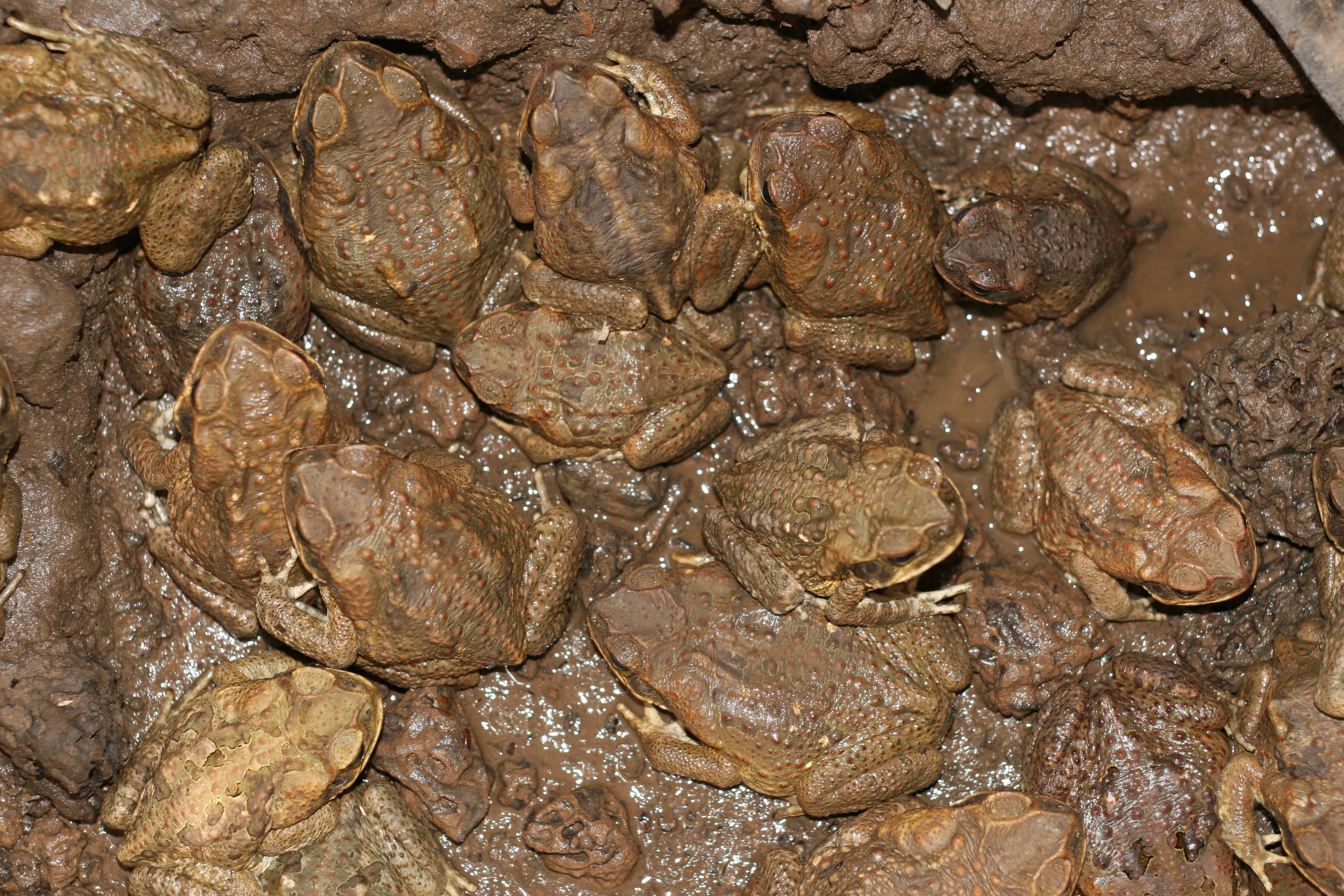 There's a lot of cane toads out there in tropical Australia, as is evident from even a few hours' collecting. To reduce toad numbers we need to do more than just remove adult toads. Fortunately, research now gives us more options. Photo by Terri Shine.