One of the most surprising results from TEAM BUFO’s studies has been the discovery of how incredibly fast cane toads have evolved during their Australian invasion. Understanding this rapid evolution in toads is central to developing ways to control them. 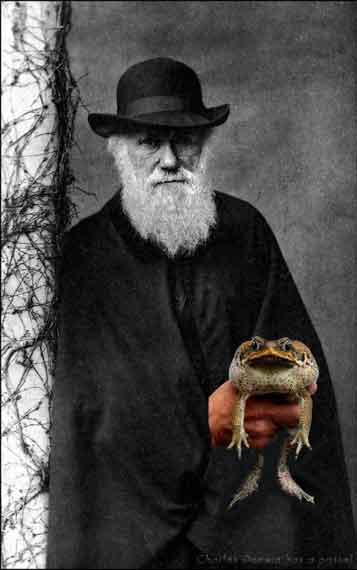 TEAM BUFO applies evolutionary concepts to the study of cane toads. We hope Charles Darwin would have approved.

We normally think of “evolution” as a very slow process, taking thousands or even millions of years. Evolution is the process by which living creatures change gradually over time. It was suggested by Charles Darwin, who also came up with a brilliant idea about the reason that living beings change in this way. His idea - "natural selection" - is based on the simple fact that characteristics that help animals to survive or reproduce will tend to become more and more common (because the animals or plants with those characteristics will survive and reproduce) whereas characteristics that make a creature less likely to survive or reproduce will die out. So long as those characteristics can be inherited from parent to offspring, evolution will inevitably occur. That is, the frequencies of different genes will change through time, and so will the characteristics of a species.

For more information on Evolution in Biology, read this Wikipedia article.

A short biography on Charles Darwin.

More information about Charles Darwin and his Theory of Evolution.

So if evolution is usually so slow, how can toads have evolved within the 70 or so years since they reached Australia?

The answer lies in a very special KIND of evolution. It’s a very new idea, and in fact our research on Aussie cane toads has provided the first really detailed evidence to support it. Which is great, because it’s meant that other researchers around the world have been very excited by our results, and we’ve been able to publish our results in the very biggest scientific journals. It’s exciting to see Australian cane toads appearing in textbooks of evolutionary biology!

Dr Ben Phillips of TEAM BUFO is one of the leading experts in this emerging field of scientific research, studying ways that the invasion process can affect evolutionary processes. So Ben spends quite a bit of time at his computer building mathematical models, as well as going out to measure toads. The basic idea of this new way of thinking is to realize that as toads spread across the Australian tropics, they automatically began to sort themselves out in terms of how quickly they were moving. Slow toads ended up well behind the invasion front, whereas quick toads were the only ones at the front. Basically, if you are too slow you get left behind. 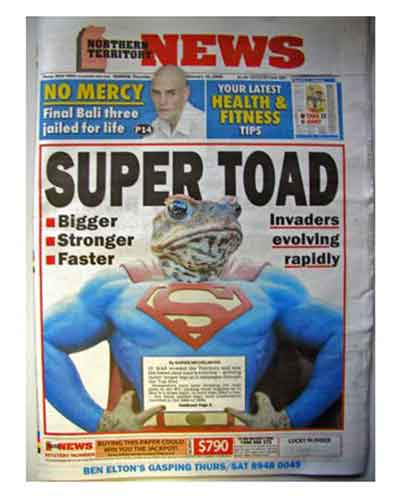 In the course of their Aussie travels, toads have evolved to be much quicker invaders

This simple process means that at the end of each generation, the animals at the invasion front are the fastest dispersers - the toads that have moved every night, all night, whenever conditions allow it (which basically means, whenever the ground is damp). These athletic toads breed with each other (it’s called the “Olympic Village Effect”!) and so produce fast-moving babies. And only the very fastest of those babies will be the toads at the invasion front next year. And so on, and so on ... Every generation, this process ends up increasing the average speed of toads at the front. The end result was that the toads that were first to arrive at Fogg Dam were really big (bigger toads are quicker), had longer legs compared to their bodies (longer-legged toads are quicker), and were amazingly active (moving every night, often more than a kilometre every night) and very directional in their movements (they all headed northwest). In comparison, cane toads radio-tracked in Queensland, earlier in the Aussie invasion (by Professor Ross Alford and Dr Lin Schwarzkopf, our colleagues at James Cook University) were nomadic, meandering around rather than racing as fast as they could in a straight line. As a result, the Queensland toads moved a bit less than 10 metres per day on average, whereas the Fogg Dam toads averaged about ten times that much. An incredible shift in behaviour in less than 70 years!

As a result of that evolutionary shift in toads, the invasion front has been moving faster and faster – from about 10 km per year in the early days (1960’s) up to around 40 to 60 km per year now. 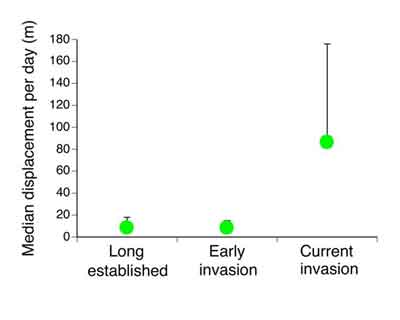 This graph shows how fast cane toads have travelled across tropical Australia. 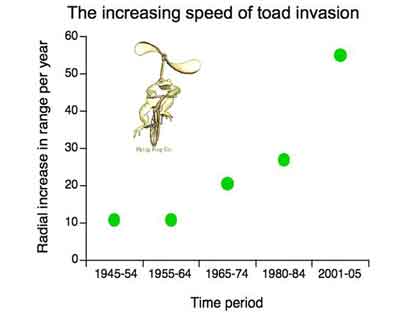 That incredible increase in toad speed has put enormous pressure on the toads’ bodies – bodies that had evolved to sit around a swamp in Brazil and eat flies, not sprint across Australia like an Olympic long-distance athlete.

Veterinary pathologist, Dr Cathy Shilton, discovered that many of the toads at the invasion front at Fogg Dam – especially the bigger, older, longer-legged animals – have severe spinal arthritis. When Dr Greg Brown tested the hopping ability of these toads (and same-sized animals with normal spines), he found that the toads with arthritis had to take shorter hops, and were obviously highly stressed and probably in a lot of pain. But when he radio-tracked them, they moved just as far as “normal” toads … cane toads really are tough! 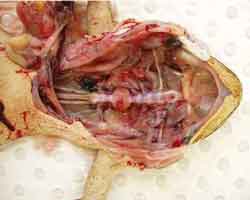