The biggest obstacle to getting rid of cane toads is that a single clutch can contain more than 30,000 eggs. This means that even if you catch and kill 99% of the adult toads in an area, the few that are left can produce so many offspring, that before you know it you are back to where you started – just as many cane toads as ever.

The only way around this problem is to stop the toads from reproducing. If we can do this, then removing adult toads can make a big difference because there are no new toads being born, to replace the ones we are eliminating.

But how can we stop the toads from reproducing?

Research by TEAM BUFO has found an exciting new weapon that can make a huge difference … we have discovered a chemical that is highly attractive to toad tadpoles but repels the tadpoles of native frogs. This makes it perfect to use as “bait” in a funnel-trap to catch toad tadpoles. Other native fauna that live in ponds (like fishes and insects) aren’t attracted to this chemical, but toad tadpoles are incredibly good at detecting it, and they search for its source as soon as they encounter it. When we use this chemical as bait in a funnel-trap, we catch thousands of toad tadpoles and almost nothing else. In one natural pond, we collected more than 40,000 toad tadpoles in less than a week.


How does it work? Remarkably, cane toad tadpoles are cannibals - if they detect a newly-laid clutch of cane toad eggs in their pond, they race across and start killing and eating them. The cannibal tadpoles not only get a meal, but they also eradicate the future competition. In our field trials, eggs placed into a pond that already contains cane toad tadpoles have almost no chance of survival. And the way the cannibals locate the eggs is by a special chemical that oozes out of the egg as it develops. Michael Crossland's research showed that the chemical in question is the poison that toads produce. 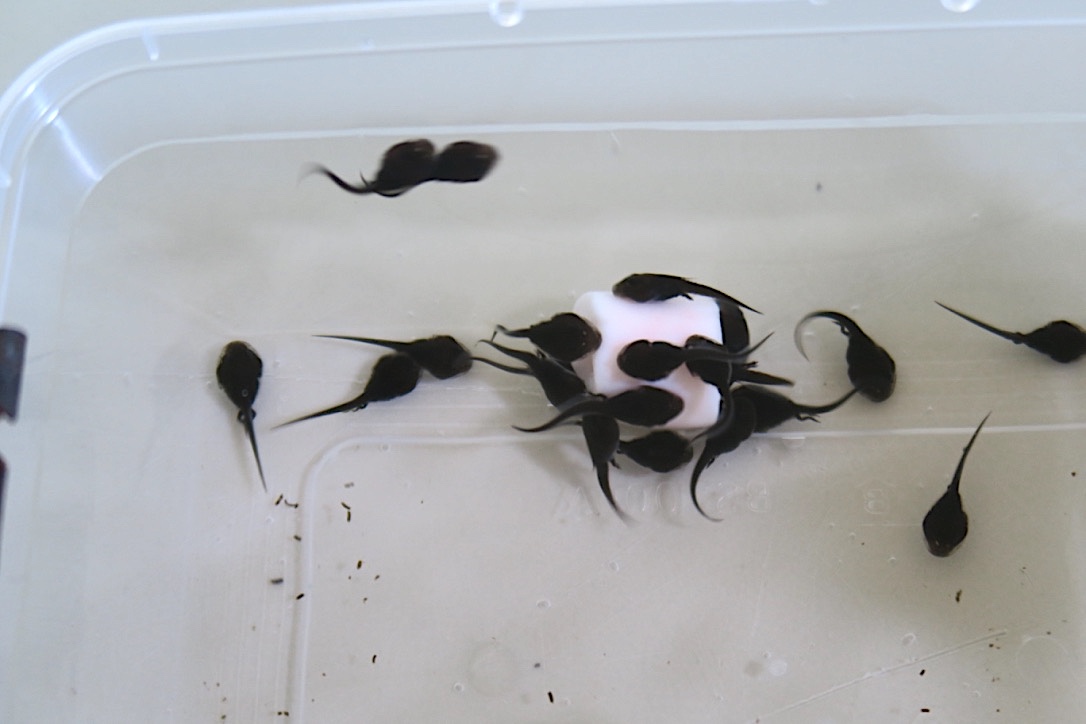 Cane toad tadpoles cluster around a toad-poison bait in the lab. Photo by Michael Crossland.

So the chemical we need to bait our traps is cheap and easy to obtain in any area where cane toads are common – it occurs in the toad’s own poisons. We can simply squeeze the shoulder (parotoid) glands of dead toads (after they’ve thawed out from their time in the freezer), and use that secretion as the bait. 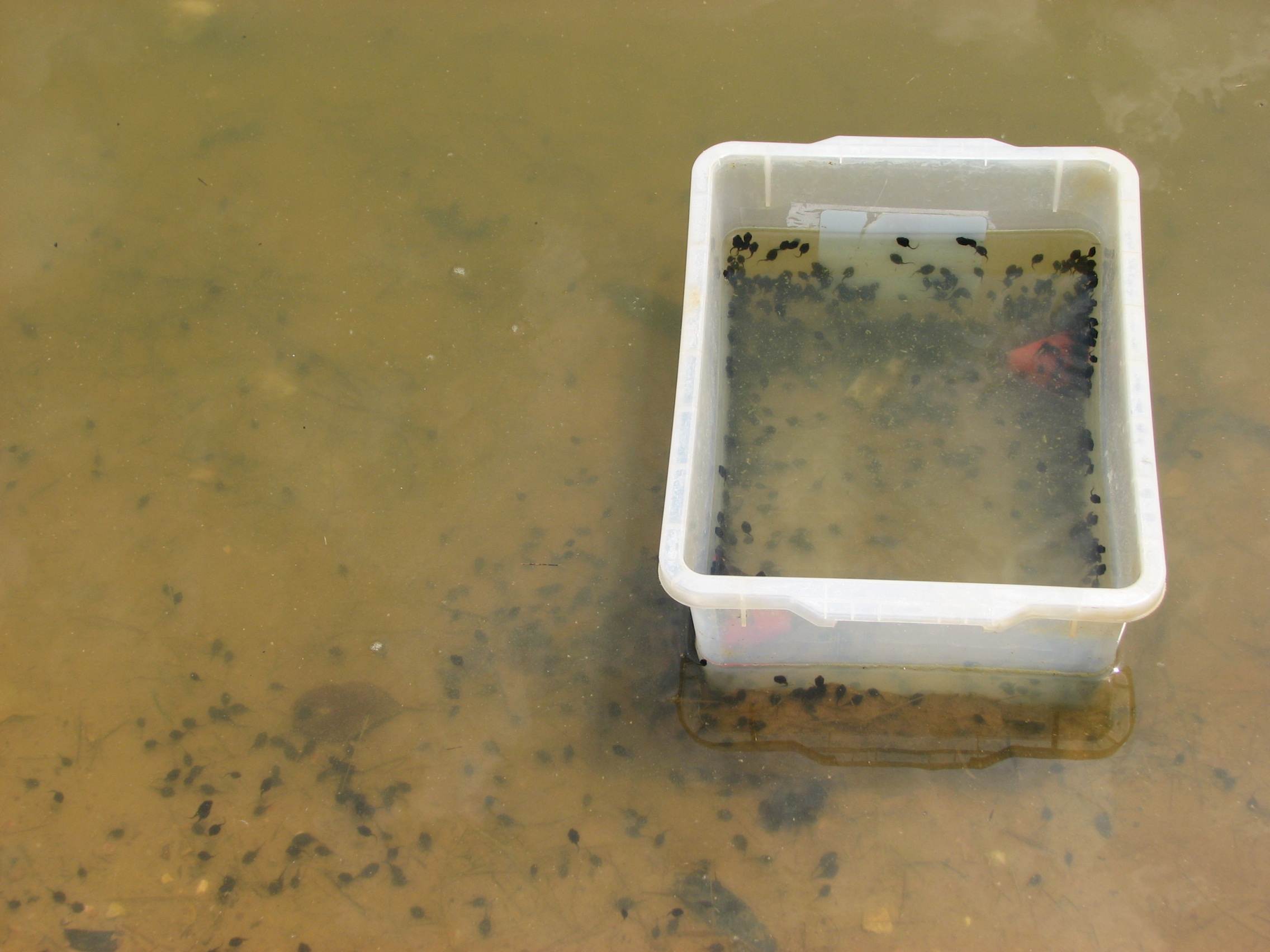 Traps baited with toad poison caught tens of thousands of toad tadpoles within a few days!  Here, we have taken the top off a trap to show many trapped tadpoles inside, and many others looking for the entrances (the red funnels on either side) so they can join their friends. Photo by Michael Crossland.

Unfortunately, we don't recommend the method to members of the general public because the toad’s poison is very dangerous to humans as well as many native species (and pet dogs,etc.) so collecting it must be done very carefully.

The collection should be done by someone who has been trained in the right methods; and suitable protective equipment (gloves, safety glasses, no exposed skin, etc) is absolutely essential. We have trained people from local “toad-busting” community groups in the proper methods, but it's still risky. So can we use a dead toad inside a funnel trap as a “bait” for toad tadpoles, without requiring any risky squeezing of poison glands? No. It's less effective than using the poison - and unless the trap is checked regularly and the "bait" replaced, the dead toad will attract scavenging native animals (especially insects, like water beetles).

But there is a simple solution. Our collaborator Rob Capon at the University of Queensland developed a safer easy-to-use "bait". The toxic poison is embedded in a harmless object (an airstone, as used in aquaria) so it won't be accidentally eaten by children or pets; and all the user needs to do is drop it into the trap. Rob's program "The Cane Toad Challenge" has now licenced our patented tadpole-trapping technology to Watergum (https://watergum.org), an Australian environmental not-for-profit organisation. Please see Watergum's website  (https://watergum.org) for information about how you can obtain the purified bait, and how you can join in the fight against toads. 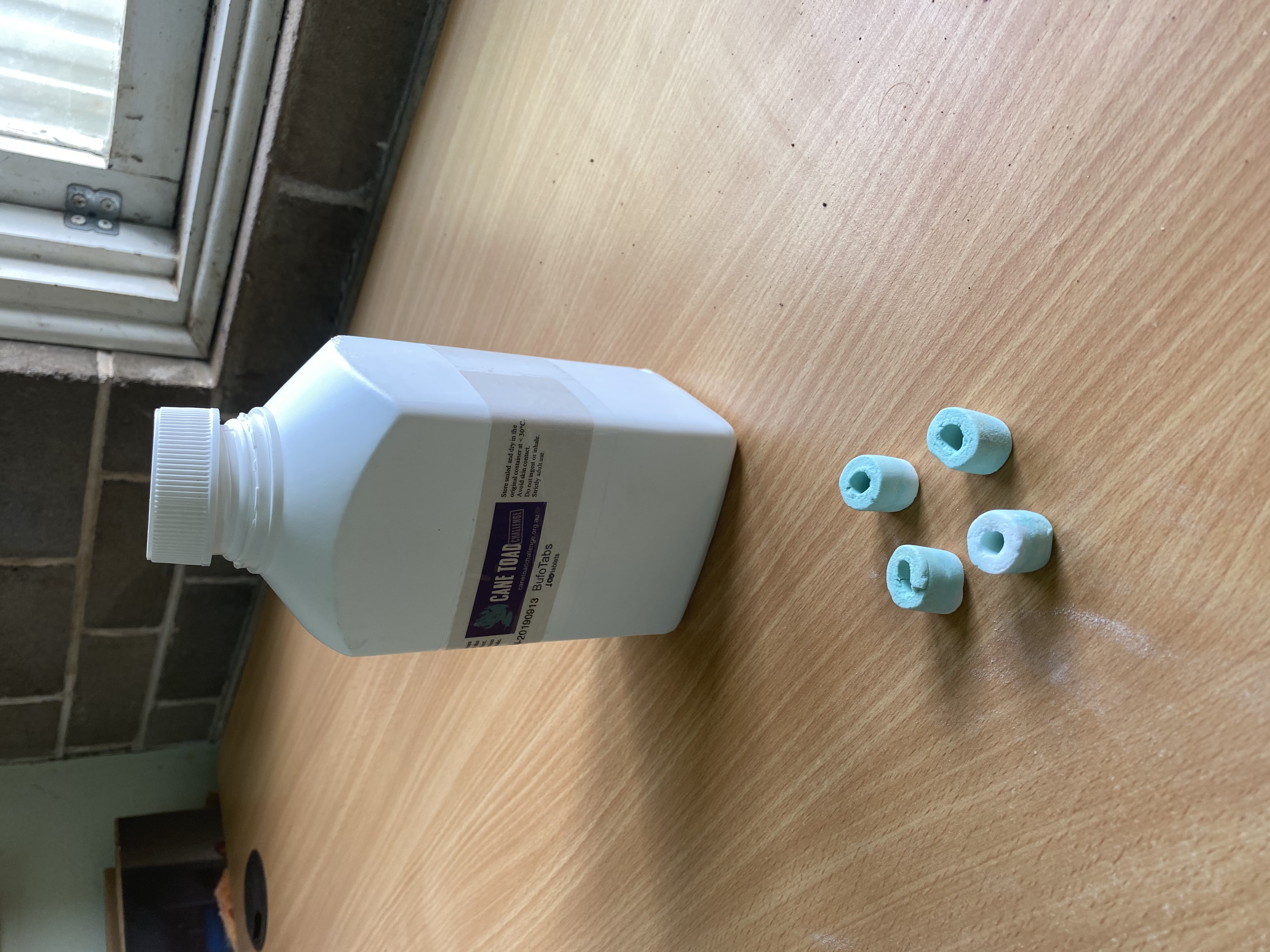 Anyone who needs to trap cane toad tadpoles can purchase "Bufotabs" - the bait for the traps - from Watergum, a not-for-profit organisation. Please see their website (https://watergum.org) for information.

The trap itself doesn't need to be complicated either. Any kind of funnel trap (or minnow trap, as the Americans call them) works fine, so long as it is made of plastic, or of mesh too small to allow tadpoles to escape. The simplest type is made by cutting a large plastic soft-drink bottle around the middle, and attaching the pointed end so that is points back towards the base to form a funnel. Several youtube videos show how to make minnow traps like this. Add an attractant as bait inside the trap, and you have an effective toad-tadpole trap.

Community "toad-busting" groups in Western Australia, Queensland and the Northern Territory have reported excellent results. In total, community groups have now caught millions of toad tadpoles from natural waterbodies using our method. It's a great example of scientists and the community working together: scientists  develop new approaches, that are then  implemented by members of the general public who are concerned about the environment. 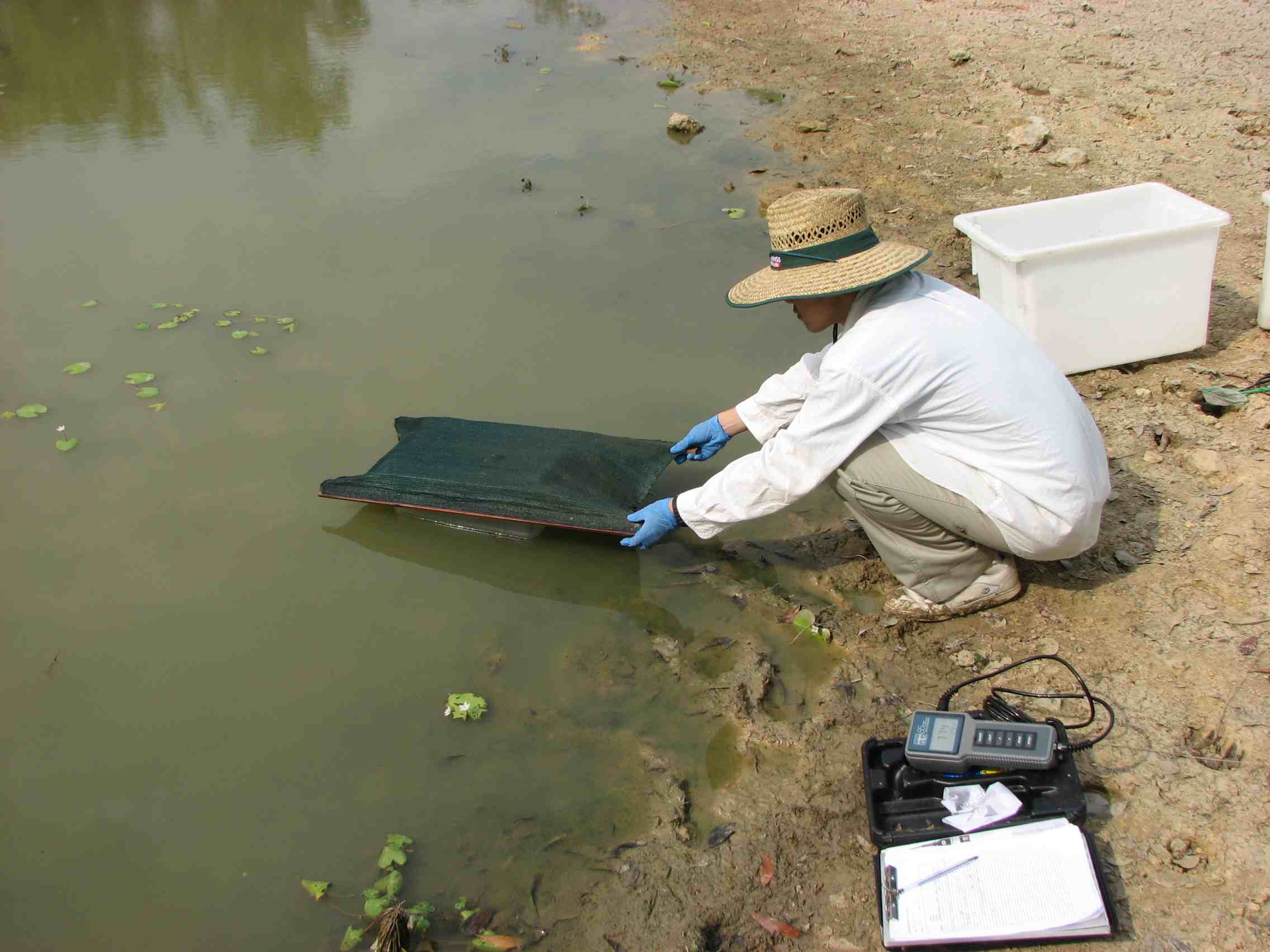 Our collaborator Takashi Haramura worked closely with Michael Crossland, discoverer of  the attraction pheromone, to test the new tadpole-trapping method in the field. Photo by Michael Crossland.

Adult cane toads don’t have many competitors in Australia, because they are very generalist feeders (eating ants, beetles, and many kinds of bugs etc.) and they live mostly in disturbed habitats – places where human activities have already exterminated most of the native species. But the tadpole stage is a different story. Lots of native animals live in the ponds where cane toads breed, and many of them eat the same kinds of food as toad tadpoles do.

There’s nowhere to go if you’re stuck in a small pond with lots of other hungry animals. As a result, more tadpoles per pond means less food per tadpole – with the result that growth is slower and survival is lower. Elisa Cabrera-Gusman showed that the tadpoles of native frogs are even more effective competitors than other toad tadpoles. A toad tadpole that has to compete with a much larger native frog tadpole is in deep trouble.

And that competitive effect suggests a simple approach to cane toad control. We need to bring native frogs back to the areas around our homes! Many kinds of frogs used to be common, but have been wiped out from many areas due to problems like water pollution. If we can encourage species like Green Tree Frogs to breed in suburban ponds, we will see a lot fewer toads emerging from those ponds.

Native aquatic insects also love to eat cane toad tadpoles, so a healthy pond with abundant water-beetles and diving bugs is a bad place for a toad tadpole! 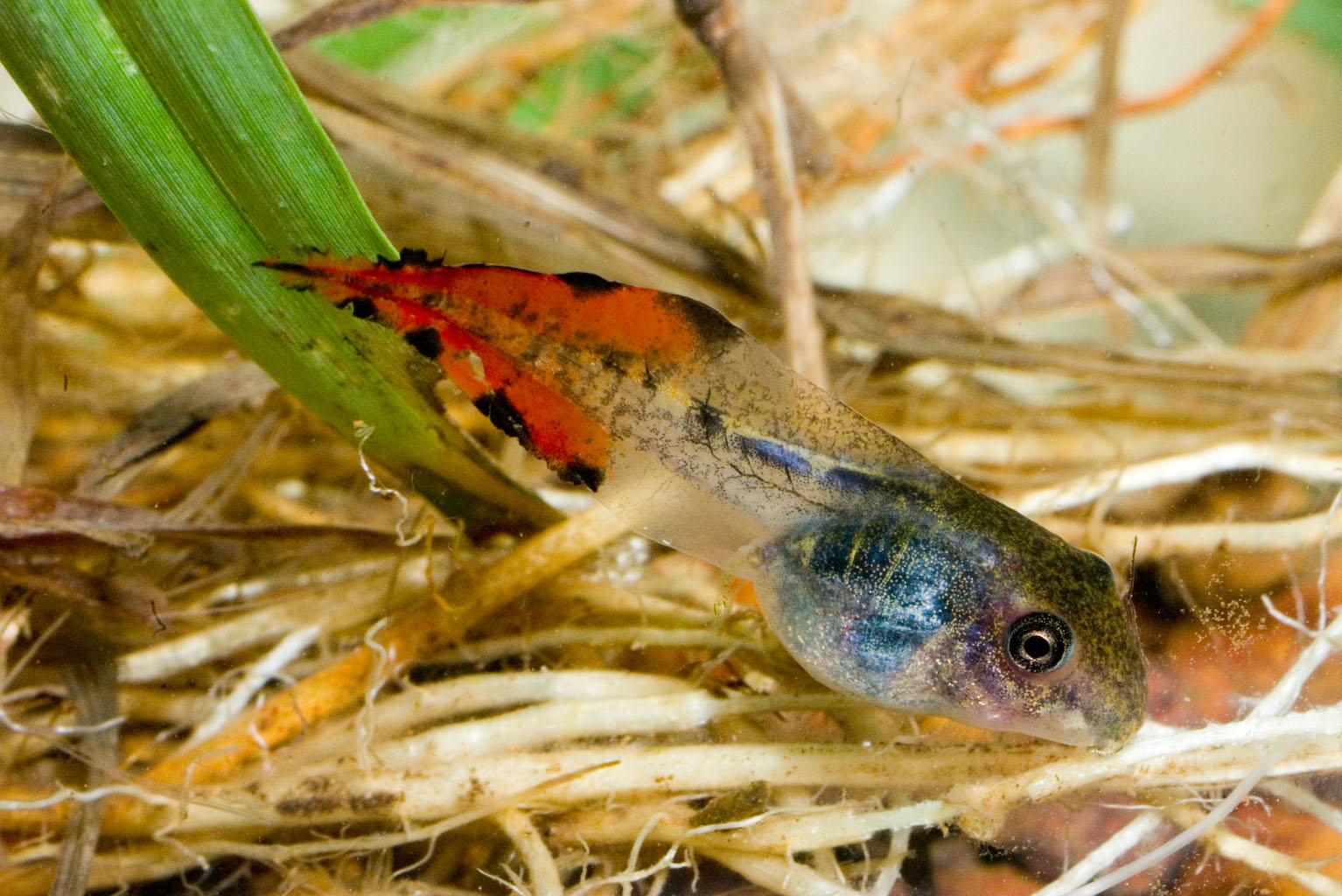 Most types of native tadpoles are larger than cane toad tadpoles, and can outcompete the toads for food. So bringing back native frogs can help to control toads. Photo by David Nelson. 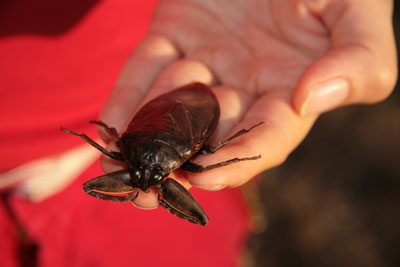 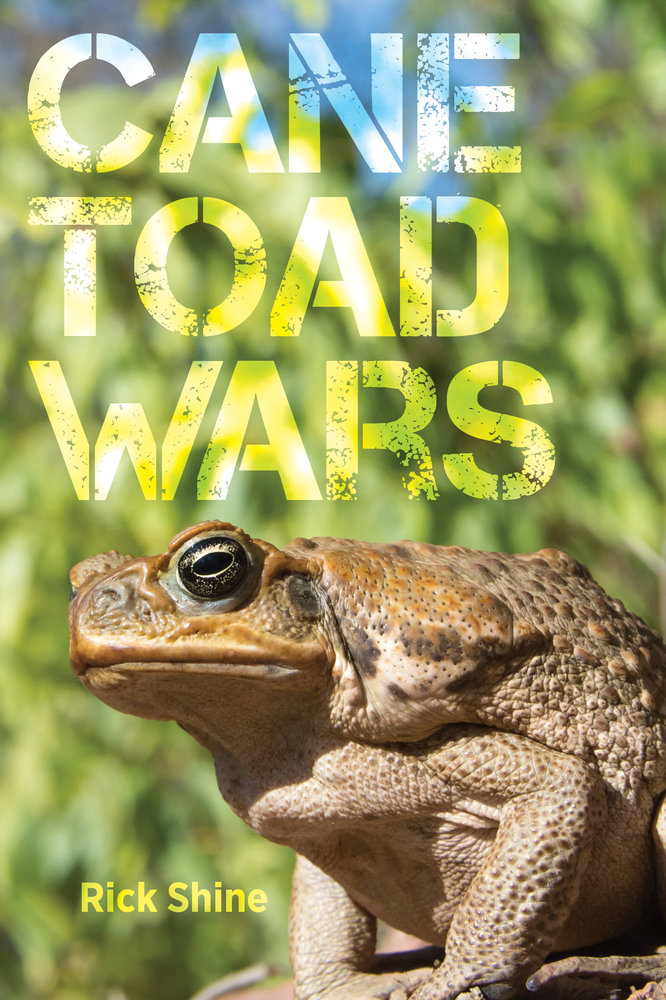