Sex life of the cane toad

The sex life of a cane toad is an interesting and intriguing subject. One of the questions we need to ask is "Cane toad sex - who does what to who?"

Like most animal species, cane toads reproduce sexually. So about half the toads are males, and half are females. The sex of a toad is determined by its genes, just like in humans. Male toads have two copies of the same sex chromosome (called the Z chromosome, so males are ZZ) whereas females have one copy of the Z and one of the W (so females are ZW). Researchers at the University of Queensland (Prof Peter Koopman and John Abramyan) studied the toad’s sex-determining system to see if they could change it to make the toads produce only sons. If it worked, that might help to control toad numbers – an all-male population wouldn’t produce any offspring. But it doesn't look like that trick will work with cane toads, although other researchers are still trying it with different pest species, like carp.

How can you tell a male toad from a female toad?

Female cane toads not only grow bigger than males, but they also look different. Females have smooth brown skin whereas breeding males have rough yellow skin. But the easiest way to tell the sex of an adult toad is to pick it up, holding it behind the forelegs. Males give a “release call” – a short trill – whereas females are silent. In nature, the “release call” is given by a male toad if another sex-crazed male grabs him by mistake. That happens a lot, because amorous male Cane Toads are not very discriminating – they sometimes seize our fingers while we are conducting mating trials! A female ready to spawn will approach a waterbody where males are waiting (and usually, calling to advertise their presence). The male seizes the female with his forelegs (a position called "amplexus"), and clings on while she moves around. Bigger males push smaller males away from the female. Fertilization of the eggs is external – that is, both the eggs and the sperm are released into the water where they can meet and join. 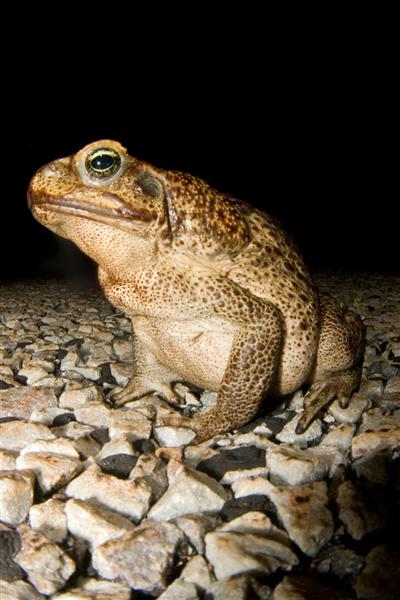 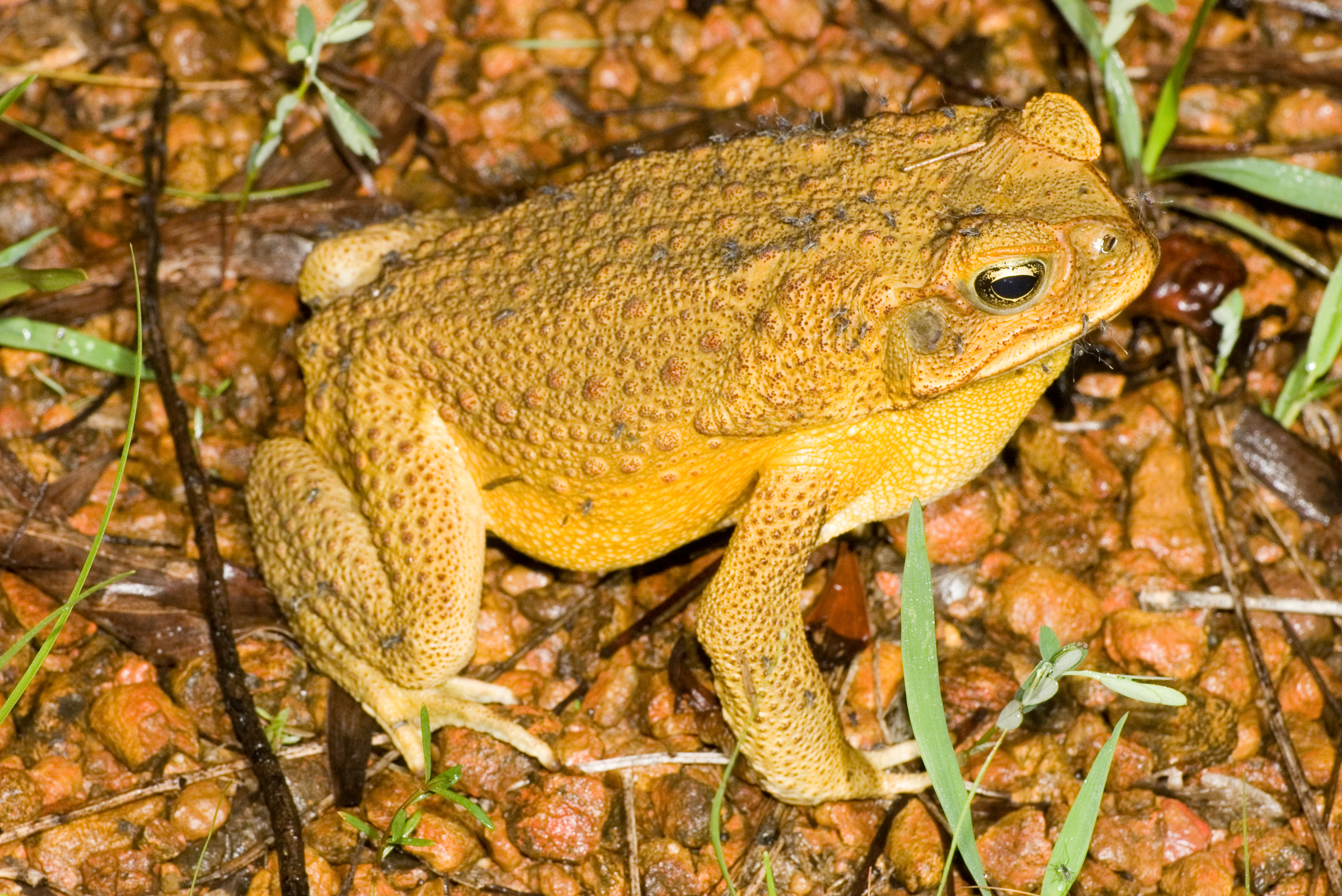 Male and female cane toads also differ in habits. Males tend to hang around the breeding ponds, calling to attract females. Females spend lots of time wandering around the wider landscape, feeding so they can accumulate the energy they need to produce a clutch of eggs.

One unfortunate consequence of this sex difference in lifestyles is that males are the easier sex for people to collect – because the boys are concentrated around the water, and draw attention to themselves by calling. As a result, hand-collections by "toad-busters" often are highly biased towards male toads. This doesn’t achieve much in terms of controlling toad populations, because a single male can fertilize the clutches of many females – so the few lucky males that are left behind may have a pretty exciting life, and the number of fertilized eggs laid in that pond isn’t reduced at all.

A male cane toad hanging onto a female, hoping to mate with her. Photo by Crystal Kelehear.

We don’t know why males suddenly decide to start calling around a pond, but it can be really dramatic. Even when there are hundreds of toads around, sometimes we don’t hear any calling for weeks on end. But then suddenly one night a group of males will converge on one particular pond and start calling. Local people understandably think that this is the arrival of the toad invasion front (because until they start calling, toads can be very difficult to find), whereas in fact the toads have been in the area for many weeks. 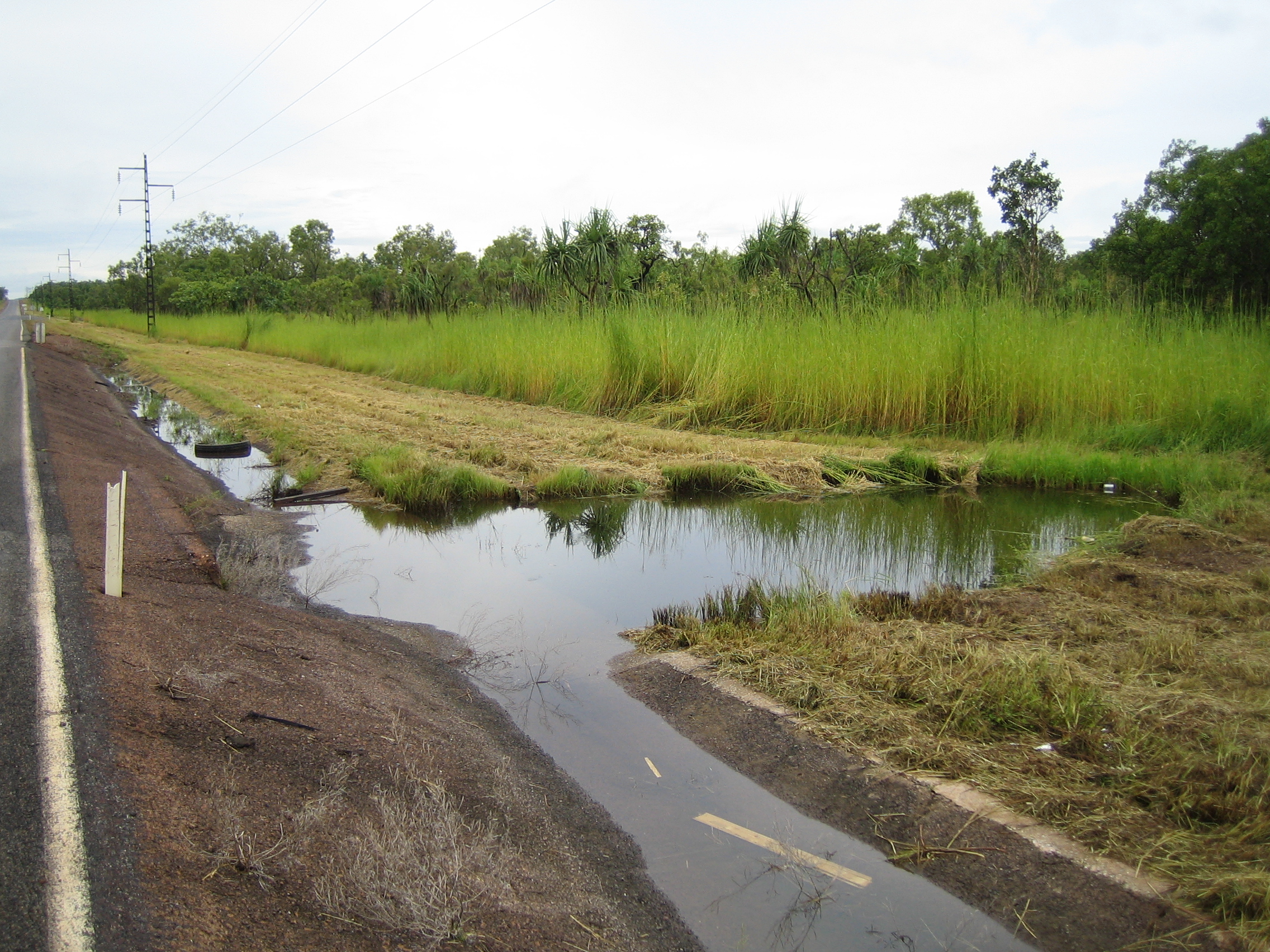 The sudden “decision” by male toads to start calling means that the first toads that people find are these males – and so, this has suggested to locals that the first wave of animals at the toad front are males, followed by the females. This simply isn’t true. Our careful nightly surveys at Fogg Dam showed that males and females were equally common among the first wave (the very first toad to arrive was a male, but the next few were all females). But because females are so much harder to find, people who just turn up to look for toads are likely to conclude (incorrectly) that the invasion front consists mostly of males.

And there's another confusing aspect that may have led community groups to make some mistakes about the sex ratio of toads they encounter. Males and females are easy to tell apart during the breeding season, because males have rougher skin and are often quite yellow in colour. But many of the males (even big adults) lose those characteristics during the dry-season, and so can be really hard to distinguish from females without dissection to examine the reproductive organs. And some small males, even though they are adults, don't exhibit the distinctive skin colour and roughness we expect from male toads.

When a female has amassed enough energy for a clutch of eggs, she goes to a waterbody with calling males. We don’t know how female toads choose their partners, but research on other species of frogs and toads suggests that this can be surprisingly sophisticated. Despite their tiny brains, female frogs are able to work out the size of different males, the loudness of their calls, the exact “musical” structure of their calls, the suitability of their territory for egg development, and so forth. Cane toads may well do the same. Males are very enthusiastic when they are breeding, and seize the female under her armpits and hang on. They need to hang on tight, because other males try to push them off. Haley Bowcock’s studies at Fogg Dam showed that bigger males are stronger, and often are able to push the little blokes out of the way.

Male cane toads can get very excited when breeding, and sometimes two males will wrestle over a single female.
Photograph by Crystal Kelehear.

Because males are fairly indiscriminate about what kind of object they grab, they sometimes grab other male toads by mistake. They soon realize their mistake, however, because the other male gives a “release call” to tell him he’s made a poor choice. Haley’s work showed that female toads can’t give that call, so once they are grabbed it’s very hard for them to convince the male to let go.

How often do toads breed?

Most female cane toads probably only lay one clutch of eggs a year, depending on how much food they can get – but we don’t really know for sure. Some females may lay two clutches a year, especially in the eastern part of Australia. Females at the invasion front in tropical Australia put most of their effort into travelling long distances, rather than breeding – so they produce fewer clutches than do female toads from the core area of the species’ Australian range, in Queensland.

The eggs are laid in a double strand within a long thin string of gelatinous jelly. 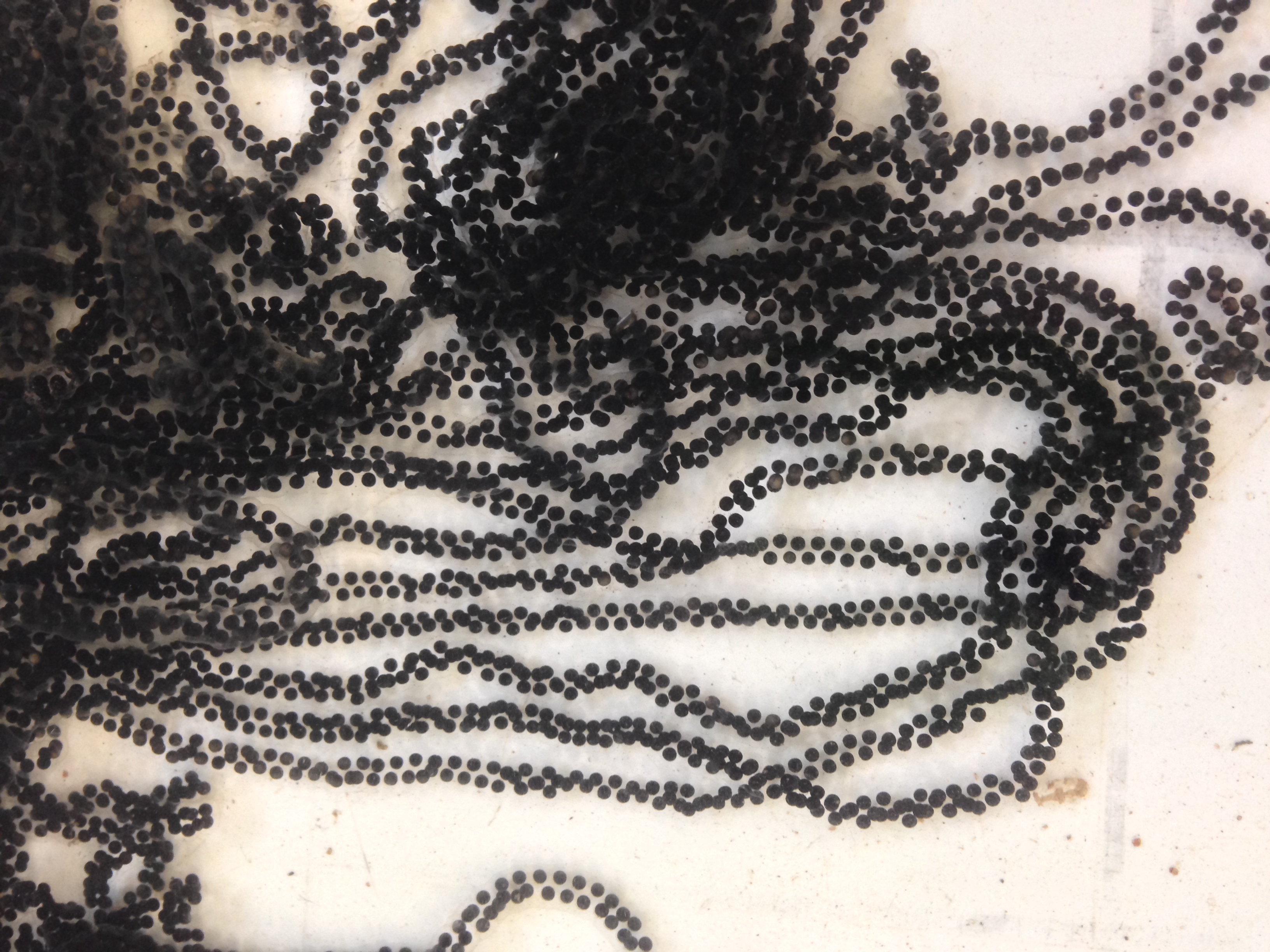 The egg-string is wound around grass and twigs in shallow water at the edge of the pool. A single clutch can contain more than 30,000 eggs, although clutches of 10,00 to 20,000 eggs are probably more common. But that's still more than in any native Australian frogs.

The eggs take a couple of days to hatch out into tadpoles, which then take from weeks to months (depending on water temperature, food supply and number of competing tadpoles) before they hatch into tiny little toadlets. 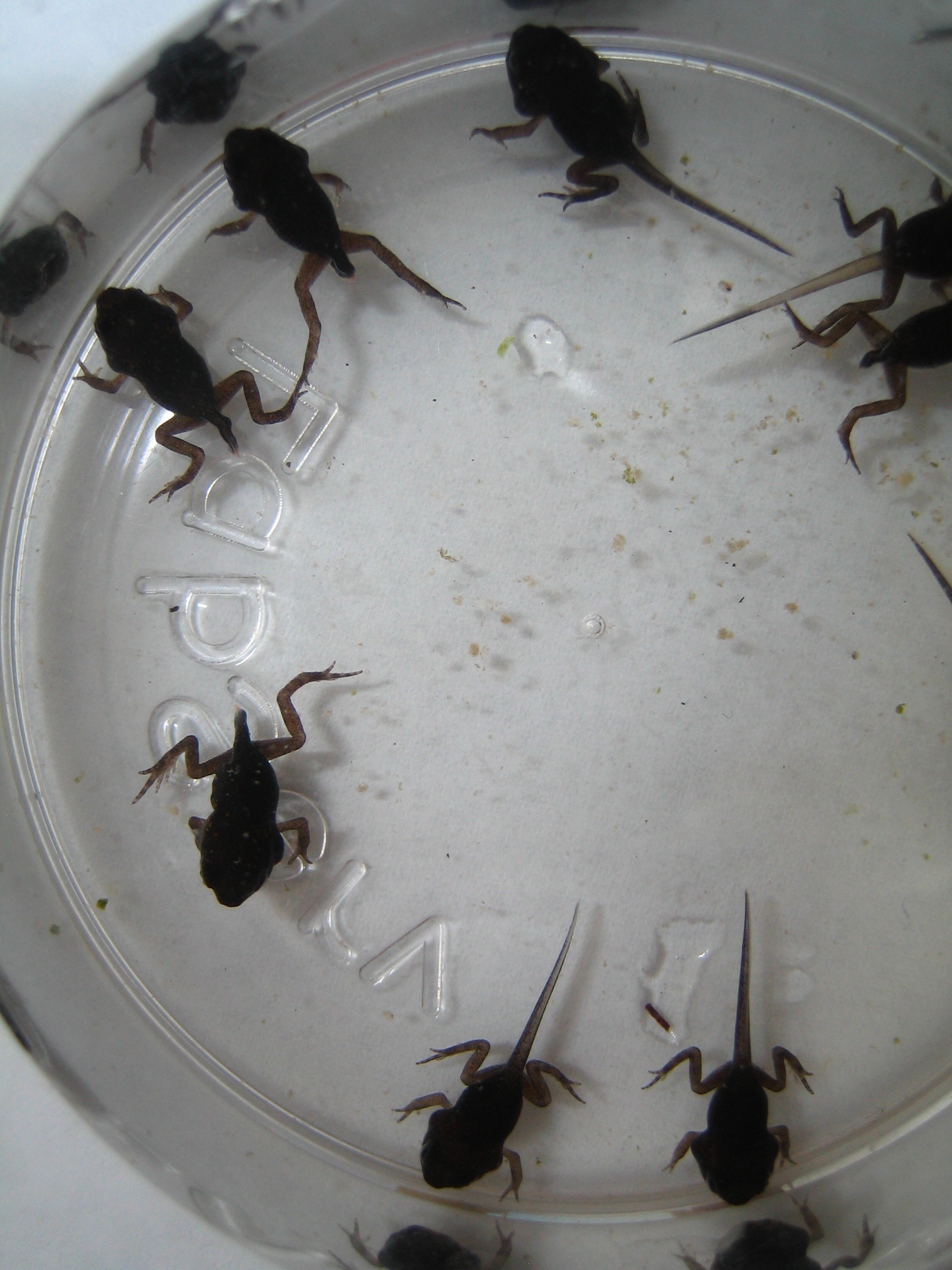 When they transform from tadpoles, cane toads are really tiny.

We’ll end by mentioning one REALLY peculiar aspect of toad sexuality. Unlike frogs, male toads not only have two testicles (inside their body, like in birds and fishes) but they also have two strange organs just above the testicles. These are called “Bidder’s Organs” and are almost as big as the testicles – sometimes even bigger. And they are basically ovaries – producing sex hormones just like female ovaries do, and containing tiny little egg-cells. 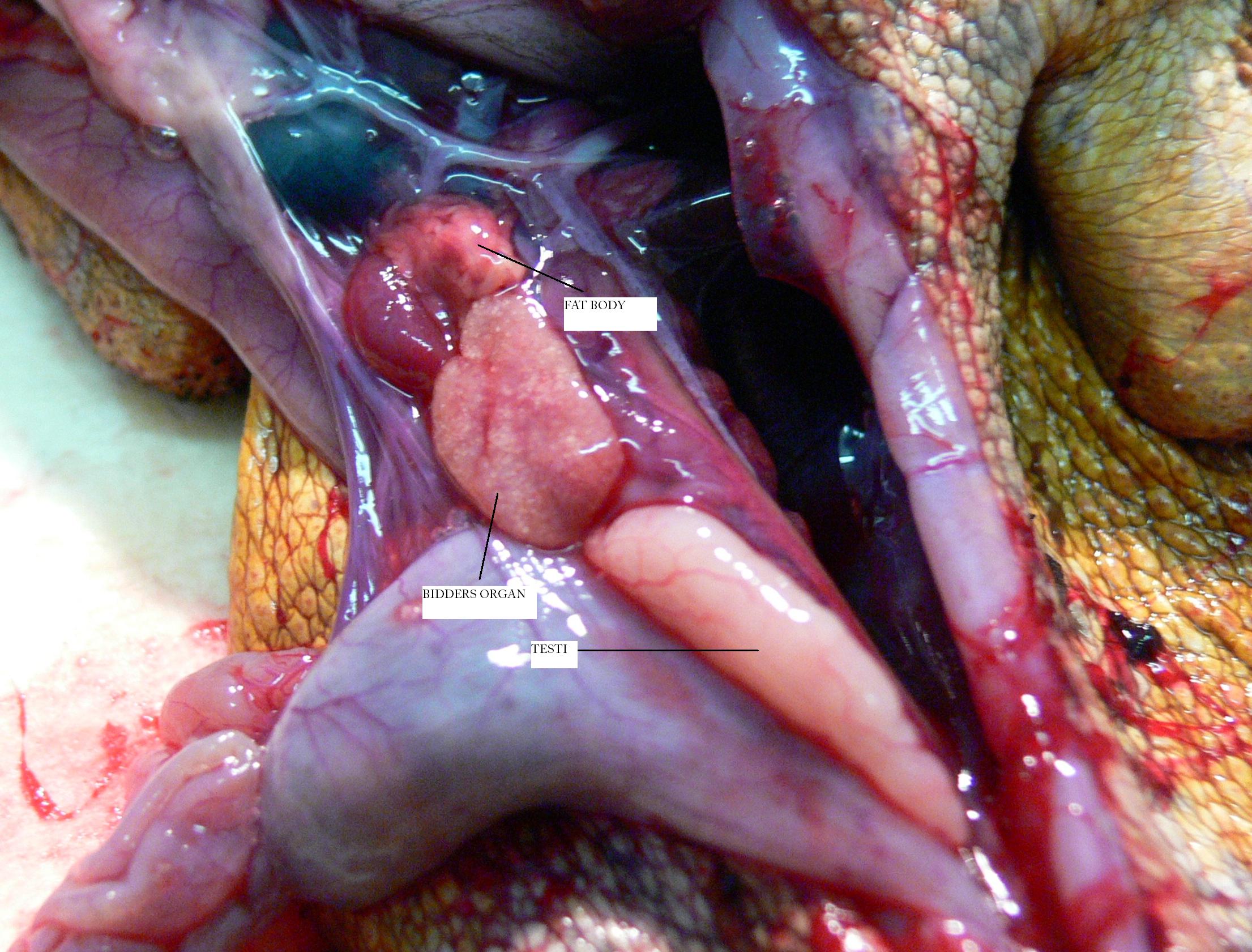 A dissected adult male cane toad showing the fat bodies, Bidder's organ and male gonad (testicle, plural "testi"). Strangely, male toads have an organ that looks like a female reproductive organ (an ovary) - as well as having the usual male reproductive organs (testi). Nobody knows why! Photo by Crystal Kelehear.

Under normal circumstances those egg-cells don’t ever develop further, but if a male is surgically castrated (that is, his testicles are removed), the Bidder’s Organ will grow larger and turn into a functional ovary and start producing eggs. Nobody really understands why toads have this weird system, but all toad species do have it whereas it’s never seen in frogs. Some recent research on cane toads in Florida (USA) suggests that pollution by agricultural chemicals can make male toads more like females in appearance and behaviour. Very peculiar!! One day, TEAM BUFO would love to do some research to find out what’s going on.