There are numerous myths about cane toads. Many of the things that people think they “know” about cane toads are actually wrong. Many other stories may or may not be true, but we simply don’t know.

One myth that you often hear about cane toads is that they were complete failures in the purpose they were originally brought to Australia for – that is, to control beetles that were damaging sugar cane crops in Queensland. Indeed, some people have claimed that the scientists involved were so stupid that they didn’t think about the fact that beetles can fly but toads can’t!

The truth is a bit more complicated.

The scientists realised that toads can't fly! But the beetles come to the ground to lay their eggs, and the scientists hoped that toads would take this opportunity to eat beetles on the ground. The toads presumably did this, but it didn't help the sugar-cane industry. Rick analysed information on sugar-cane yields in the years around when toads were released in the cane-fields, and there is no hint of an increase in yields. So, the toads didn't do the job they were brought here for.

Why did toads fail to control cane beetles? One reason may be that they didn't eat enough beetles. But another part of the reason involves collateral impacts on wildlife. We know that goannas love to eat cane beetles, so were doubtless helping the farmers - but when the toads arrived, the goannas were fatally poisoned by eating toads. So, the existing "toad-control animals" were largely eliminated. 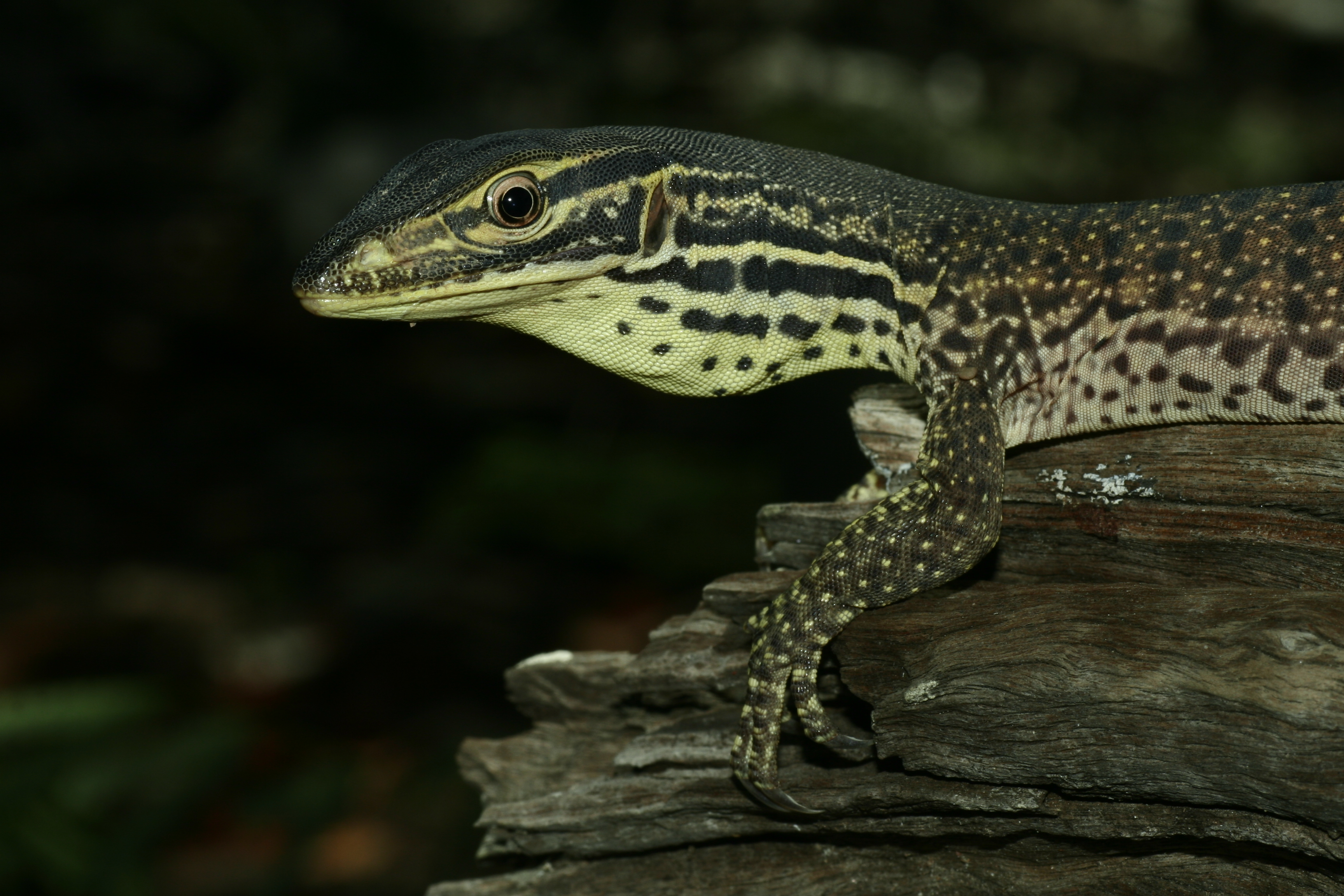 One reason why cane toads failed to control beetles in sugarcane crops was that the toads fatally poisoned the animals that had previously been effective beetle-controllers - goannas like this Yellow-spotted Monitor. Photo by Ruchira Somaweera.

And ironically, some of the few native species that can eat toads without any ill effects are rats - so when the toads arrived, rat numbers would have increased because of this new food source (and the disappearance of rat-eating goannas as well). Rats love to eat sugarcane as well as eating toads, so the toads were a double whammy for the farmers. The number of rats eaten by cane toads wasn't enough to make up for the disappearance of beetle-eating goannas, and the problem was made worse by increasing numbers of cane-eating rats. 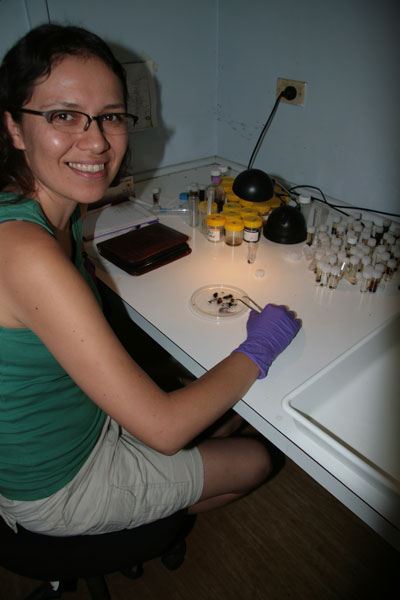 Toads have caused the extinction of many native Australian species

No Australian species is known or even suspected to have gone extinct as a result of cane toads. When they first arrive in a new area, cane toads kill lots of frog-eating predators like quolls (carnivorous marsupials), goannas (varanid lizards and bluetongue skinks) and snakes like death adders, red-bellied blacksnakes and king brown snakes. But over time, the Australian species adapt to deal with the toad’s presence – so if you go to places where toads have been around for many decades, most of those predator species are much more common again. They may not be as common as they were before toads arrived – we can’t tell because we don’t have any detailed information on historical numbers – but they certainly are much more common than they were a few years after the toads arrived.

How do the Australian frog-eating predators change so they can deal with toads? Two things happen. First is that many species just don’t like the taste of toads, or feel sick if they eat one but don’t die – and so they learn to stop trying to eat things that look like toads. For example, fishes (like barramundi), frogs (like the Dahl’s Aquatic Frog) and mammals (like planigales) all learn to avoid toads very quickly.

The second thing that can happen is that even if species don’t learn quickly (perhaps because eating even a small toad is fatal), they can adapt by means of rapid evolutionary change. So, for example, red-bellied blacksnakes are very slow learners but nonetheless persist even in areas where toads have occurred for a long time. The way they achieve this is because the only survivors after toads arrive are the few snakes that happen to have genes that say “don’t eat a toad”; or that confer resistance to the toad’s poison. When they reproduce, they pass those characteristics onto their babies – and so, we soon get a population of blacksnakes that can coexist with toads without too many problems. 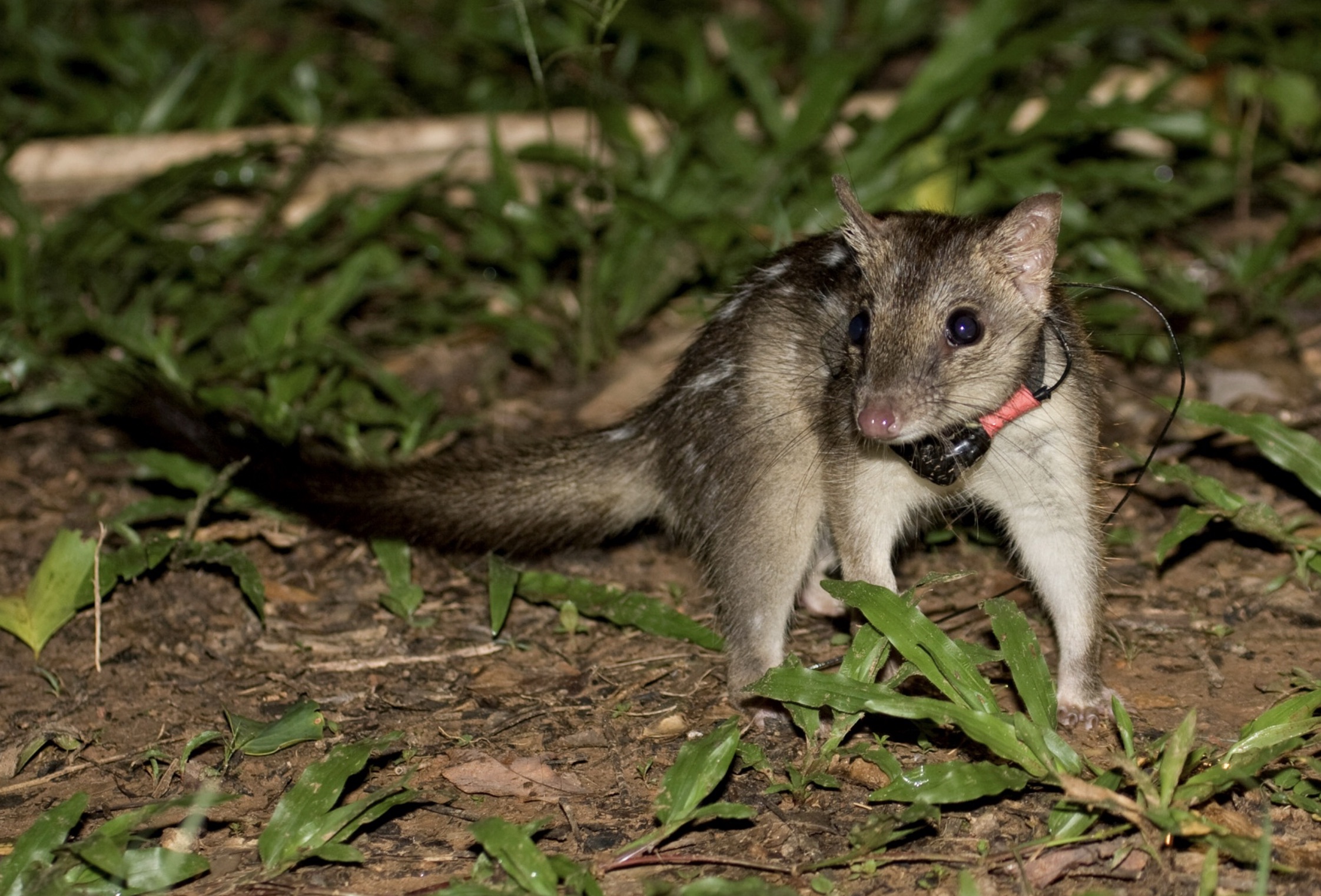 Populations of Northern quolls decline with toad invasion, but Steph O'Donnell showed that if you teach young quolls not to eat toads, the quolls survive after release. To find this out, she radio-tracked trained and untrained quolls, and compared their fates. Encouragingly, quoll populations are recovering in Queensland, and the animals there have a genetic predisposition not to eat toads. Photo by Jonno Webb.

The toad's poison is deadly to all Australian predators

It’s true that Australia doesn’t have any native toads of its own (it’s the only major continent not to), and that toads have poisons different from those of Aussie frogs. So, many predators are unable to deal with these poisons, because they have never had to deal with them over the last few million years of evolutionary history. But some native frog-eating species are perfectly capable of eating toads. For example, keelback snakes can eat all the toads they like without dying. Many birds also don’t have any trouble, and indeed road-killed toads are a popular diet item for hawks at Fogg Dam. Native rodents happily munch cane toads without becoming ill. And many invertebrates handle the toad’s poison also – sometimes you can see meat ants grabbing and eating huge numbers of tiny toads beside billabongs. A lot of insects that live in the water - like water beetles and waterbugs - actually prefer to eat toad tadpoles than frog tadpoles. 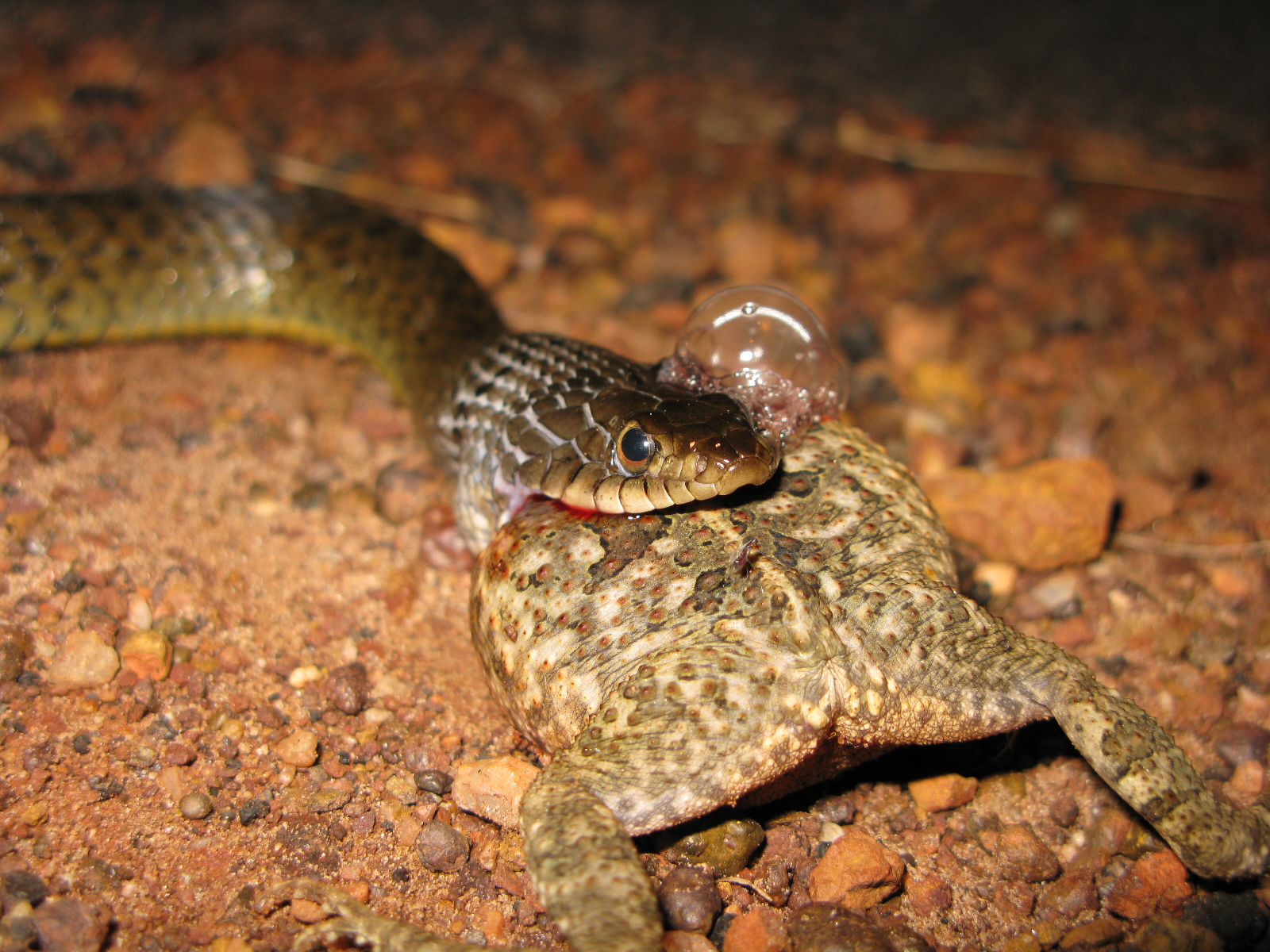 People often say that cane toads are deadly to all native predators in Australia, but this keelback snake disagrees. It is eating a small toad, and can do so with impunity because keelbacks evolved in Asia, in areas where other kinds of toads are common. As a result, the ancestors of Australian keelbacks evolved to handle the toad's poisons.  Photo by Greg Brown.

Toads are wiping out native frogs

As in so many things to do with cane toads, intuition proves to be a bad way to predict what happens to the native wildlife. For example, common sense says that frogs will be in real trouble when toads arrive – but they aren’t. Although toads do compete with frogs for food, and do sometimes eat frogs, the number of frogs doesn’t go down when the toads arrive. There have been several studies on this topic – some relying on just counting frogs, others using more complicated systems like electronic listening posts to record the male frog’s calls before and after toads arrive – and none of them show any decline in frogs due to toads. How can that be? Surely a frog-like animal from overseas that becomes incredibly abundant in your home pond is a problem if you’re a frog? But if you think about it a little more, it makes sense. Toads DO look like frogs – but this means that many animals that eat frogs try to eat toads. Because the toads are so poisonous, the predator dies – and so, the toads act like booby-trapped frogs and kill many of the frog’s natural predators. That means that a lot more frogs survive because they aren’t being eaten by goannas and snakes and so forth – more than enough to make up for the few that are eaten by toads. 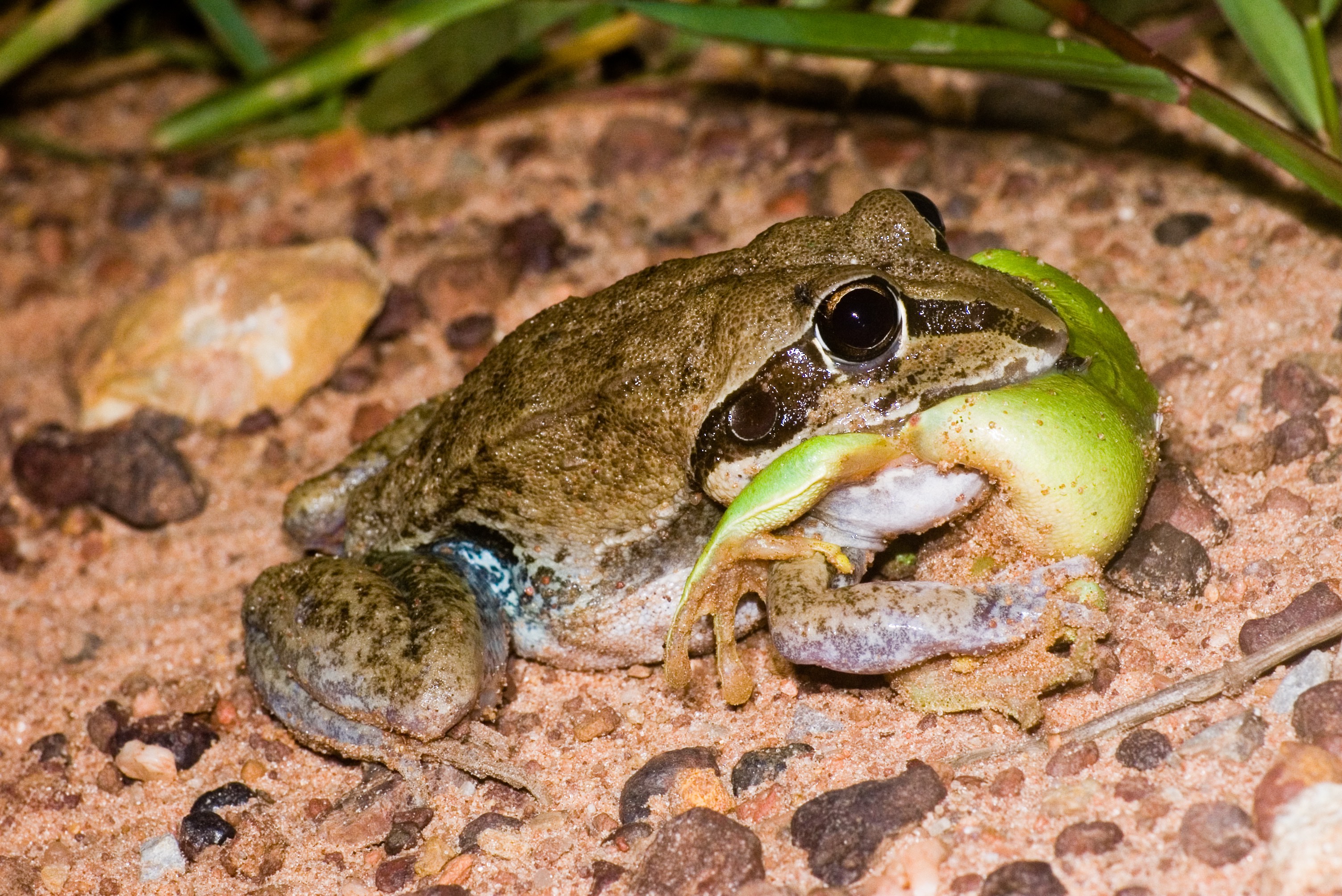 It's a frog-eat-frog world, and cane toads don't seem to make much difference to frog numbers. In this photograph, a Giant Burrowing Frog is eating a Green Tree Frog. Photo by David Nelson.

One of our main aims with this website is to provide reliable evidence about cane toads in Australia, backed up by scientific research. We haven't put lots of details about that evidence on the main pages, but it's easy for you to get to it. If you want to explore a topic in more depth, just search on the "Google Scholar" website.