Where do our cane toads come from?

The cane toad has mounted a successful invasion in Australia and many other countries - but where did the toad come from originally? These toads have a wide native range in South America, and a closely related species (only recently recognised as different from cane toads, and called “Rhinella horribilis”) occurs over a large area as well. That part of the world has several species of very large toads.

Studies on the DNA of Aussie toads show that their ancestors came from French Guyana, in South America. These were taken to Puerto Rico, then 150 toads from that island were taken to Hawai’i in 1932 – and finally, 101 Hawaiian toads were brought to Australia in 1935. That was the beginning of the Australian invasion.

In 2016, South American biologists discovered that there are actually TWO species of cane toads. The one that came to Australia is only found east of the Andes mountain range in South America.

Why were cane toads brought to Australia?

In the 1930’s, sugar-cane-growers in Queensland were concerned about crop damage due to beetles – especially the frenchi beetle and the greyback beetle. So the Queensland Department of Agriculture looked into possible solutions. The chemicals available to kill insects at that time were very nasty, so “less destructive” approaches were examined. Based on reports of cane toads increasing yields in Hawai'ian sugar cane crops by eating beetles, Reginald Mungomery organized the import of toads.

It’s easy to criticize scientists like Mungomery. With the benefit of hindsight, bringing in toads was a REALLY bad idea! But we think that’s a bit tough – if they were indeed looking for a more ecologically sustainable solution to beetle damage than harmful chemicals, all we can say is that they tried to do the right thing, but got it awfully wrong.


How fast are cane toads moving through Australia?

One of the benefits of studying cane toads is that the general public really care about them, and so people watch out for the advancing toad invasion front. As a result, we have really detailed information – from postal surveys and so forth – to show exactly how fast the toads have spread through Australia, and where they have gone. 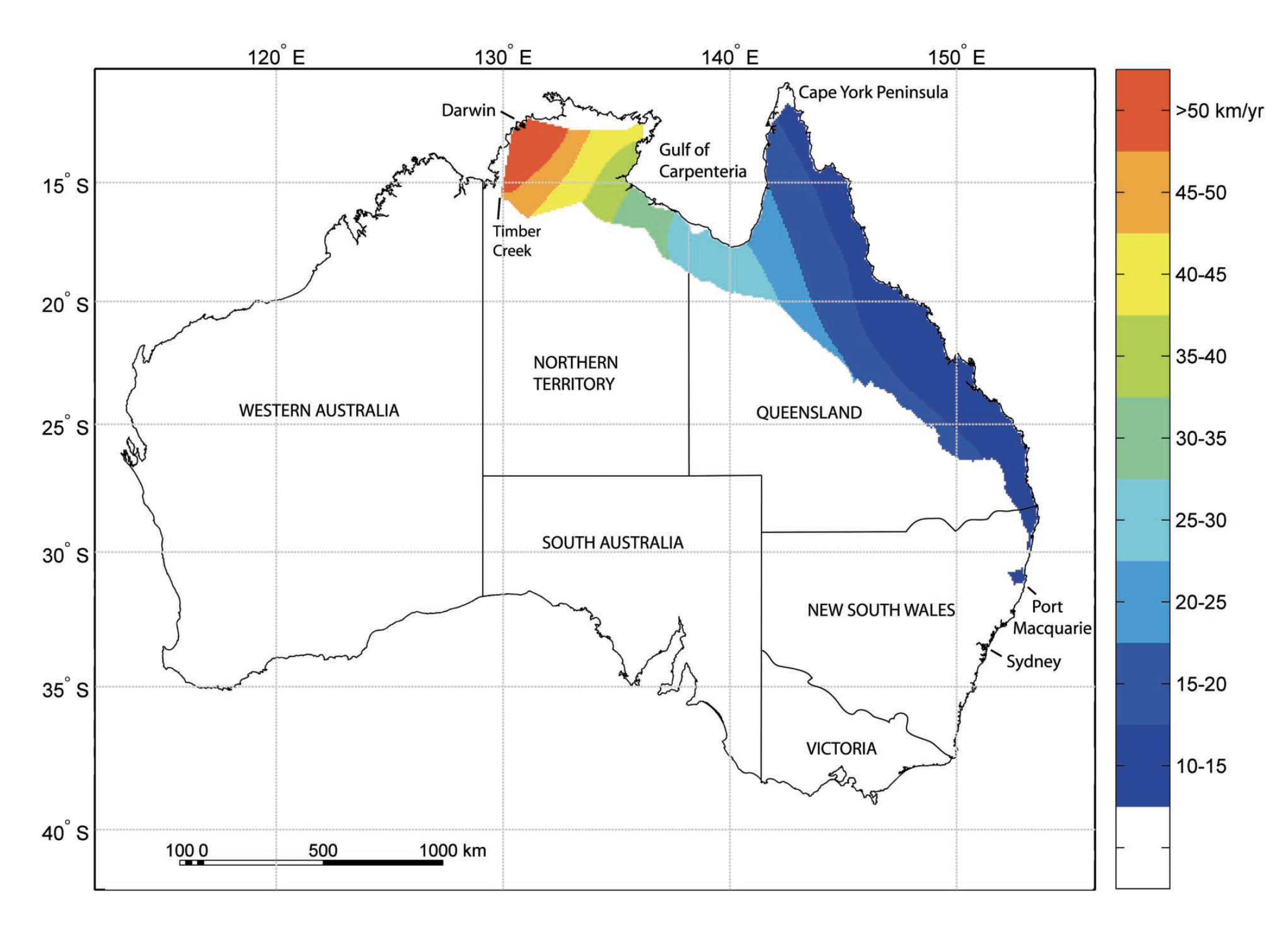 Toads have moved faster and faster through tropical Australia. The colours show speed of range expansion, from 10-15 km per year in the 1930s (blue) through to 50 to 60 km per year by 2015 (red). Their speed has remained fairly constant (and fast!) since this map was made. Map by Mark Urban.

Our analyses show a clear pattern. In the early years (up to the 1960s or so), the toad invasion front advanced slowly – about 10 km each year. But then it began to speed up, and has kept accelerating. The front now moves at about 40 to 60 km per year, and our radio-tracking shows that this is because individual toads at the front travel long distances (sometimes more than a kilometre) each night – and do so every night. This is an incredible rate for an amphibian: cane toads at the Aussie invasion front travel much much faster and further than any other frogs or toads that have been studied elsewhere in the world. 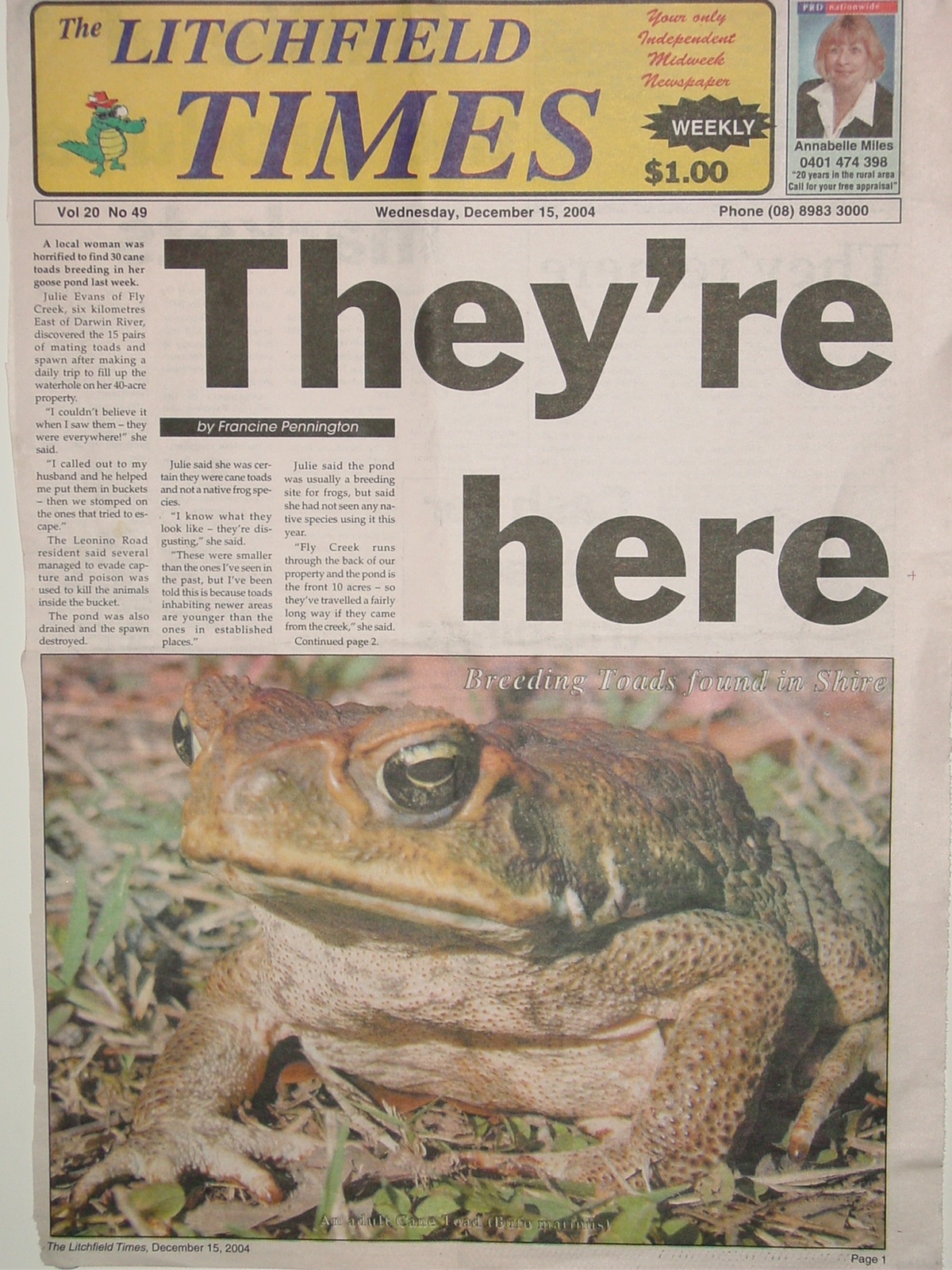 Why are the toads moving faster? It’s due to the pressures that flow from an invasion. Every generation, the cane toads at the invasion front are the ones that have gone farthest: that is, the fastest-moving animals. And the next generation, the only animals at the invasion front are the fastest-moving offspring of those fastest-moving toads. And so on, year after year. The end result is that the toads at the front have characteristics that enable them to disperse more quickly than other toads. Any gene that tells a toad to slow down, to rest, to travel back the way it was going yesterday, will end up being left behind. And the result of that process is that the toads are accelerating – from 10 km per year in the early years, through to 50 km per year today. 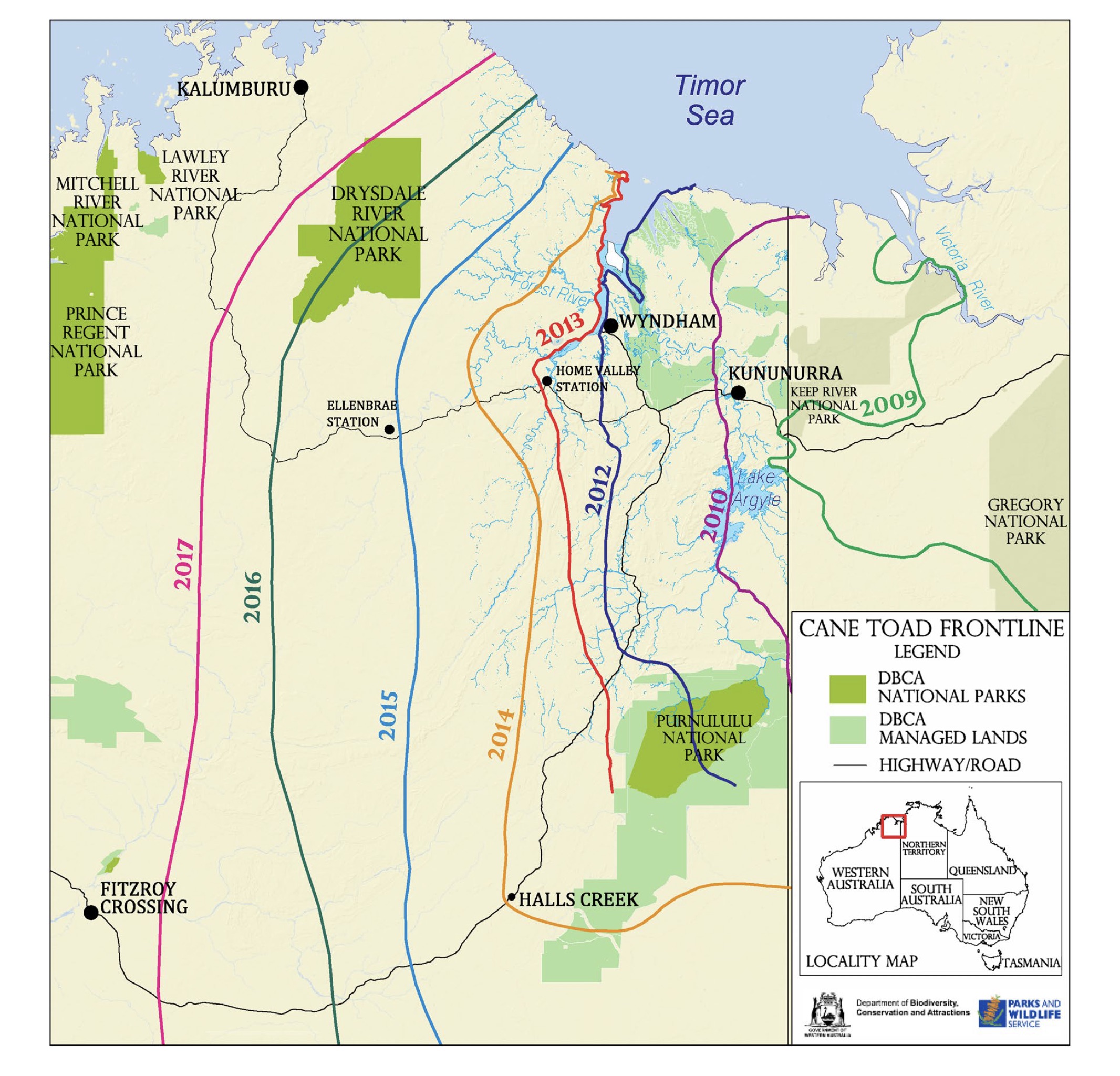 Community toad-busters and government management authorities have mapped the rate at which cane toads are expanding their range. We worked with the Western Australian authorities (Department of Biodiversity, Conservation and Attractions) to compile this map of toad expansion rates through the Kimberley. As you can see, the toads are covering long distances every year.

Listen to Rick talking with ABC Radio's Tony Eastley on the AM program about the toad invasion.

An interview with Rick in THE AGE about the cane toad invasion.

One of the most amazing recent developments in the cane toad invasion is their spread into the very dry parts of western Queensland. Toads are now firmly established around the Longreach area, and one population (deliberately introduced - some people never learn!) is all the way into the desert around Windorah. The toads are also moving into desert regions along the Victoria River, in the Northern Territory. TEAM BUFO has conducted research in both of these areas, to help understand how a giant frog from the Amazon rainforests has been able to colonise such dry and difficult environments. And there is clear evidence that cane toads are rapidly adapting to harsh Australian conditions, whether it be heat, cold, or drought. 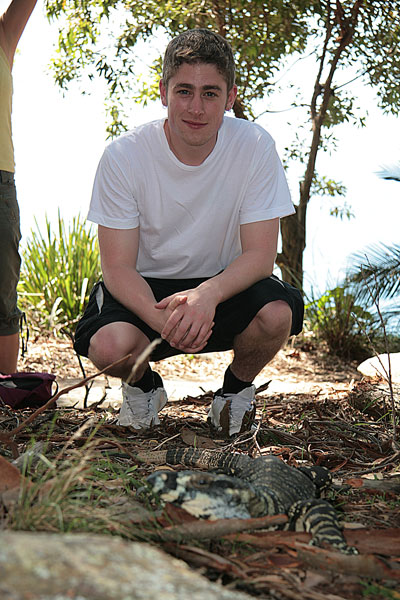 While he was a postgrad student with Team Bufo, Reid Tingley radio tracked cane toads in the desert landscape around Longreach in western Queensland. Reid survived his Ph D, is now at the University of Melbourne (photo by Terri Shine).

The cane toad invasion isn’t just in the tropics. The toads have gradually been spreading south along the coast of New South Wales as well, with occasional help from people. Several populations are isolated, created by “hitch-hiker” toads that have come in on the backs of trucks. One of those feral populations has even made it to Sydney. 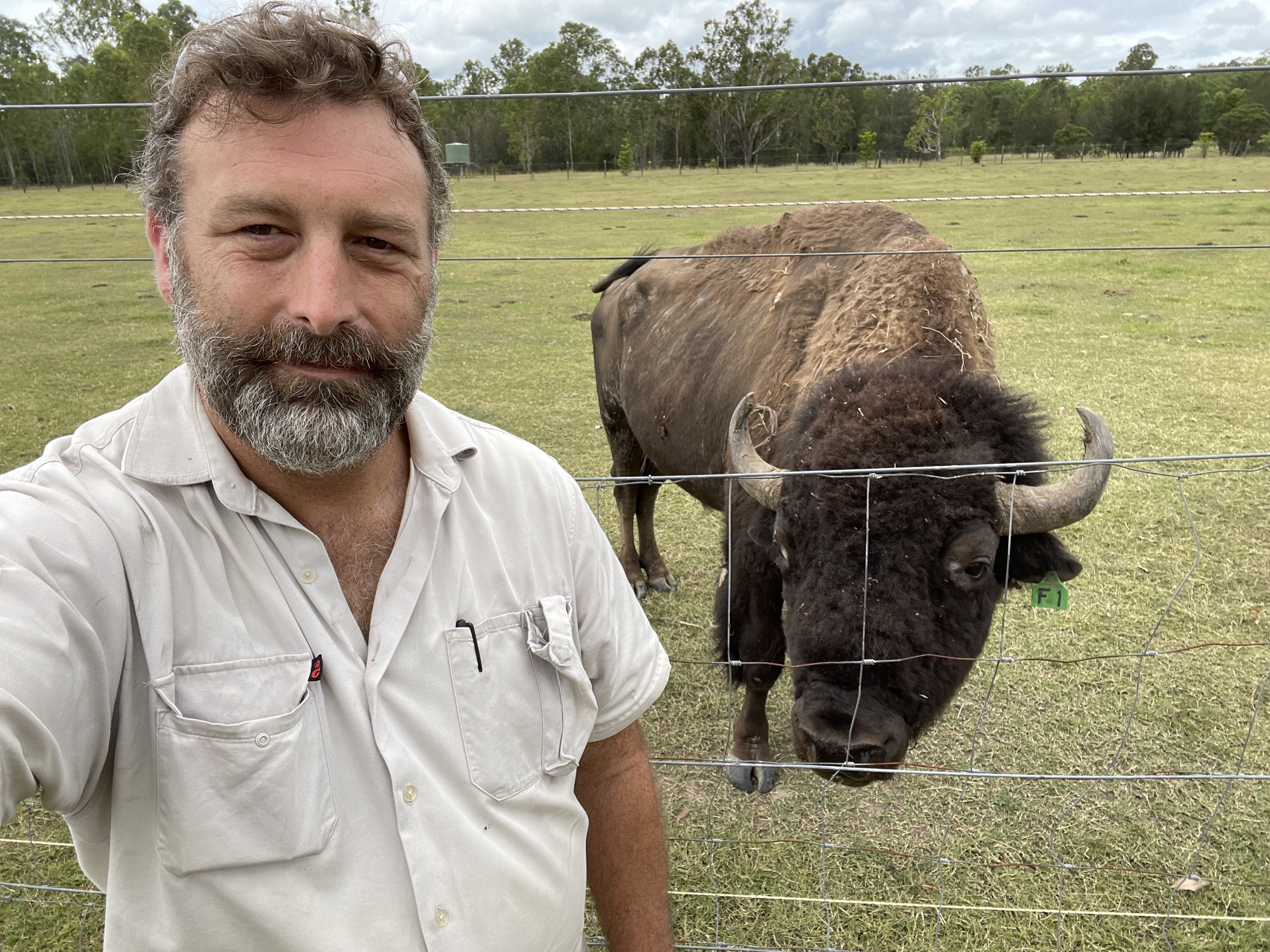 Matt Greenlees is the lead researcher for Team Bufo's studies in New South Wales. We think that Matt is the one on the left. Photo by Shannon Kaiser.

The main invasion front of cane toads in New South Wales is near the town of Yamba, a bit north of Coffs Harbour. The toads are still spreading southwards, but only slowly – especially compared to their rapid march across the tropics. In most years the toad front seems to expand by around 2 or 3 kilometres – but faster in warm dry years, and slower in cold wet years. Sometimes the toads at the invasion front don’t survive during periods of bad weather, so the front shifts backwards. Lincoln McGregor reviewed all available records of cane toads in New South Wales over several decades, and has mapped the spread very precisely.

One worrying development was the discovery by Dave Newell, from Southern Cross University, that cane toads are penetrating into very high (and thus cold) areas in the Border Ranges. How can a tropical frog deal with those low temperatures? To answer that question, Sam McCann looked in detail at toad responses to temperature in that region. She found that toads can rapidly adjust their physiology to cope with cold – a frightening result in terms of its implications for the toad’s ability to spread even further south! And in parallel work in Hawai'i, Sam found the same “cold-hardening” ability in toads from a high cold area on a volcanic mountain. So whenever cane toads penetrate into severely cold regions, they find ways to deal with the problem. 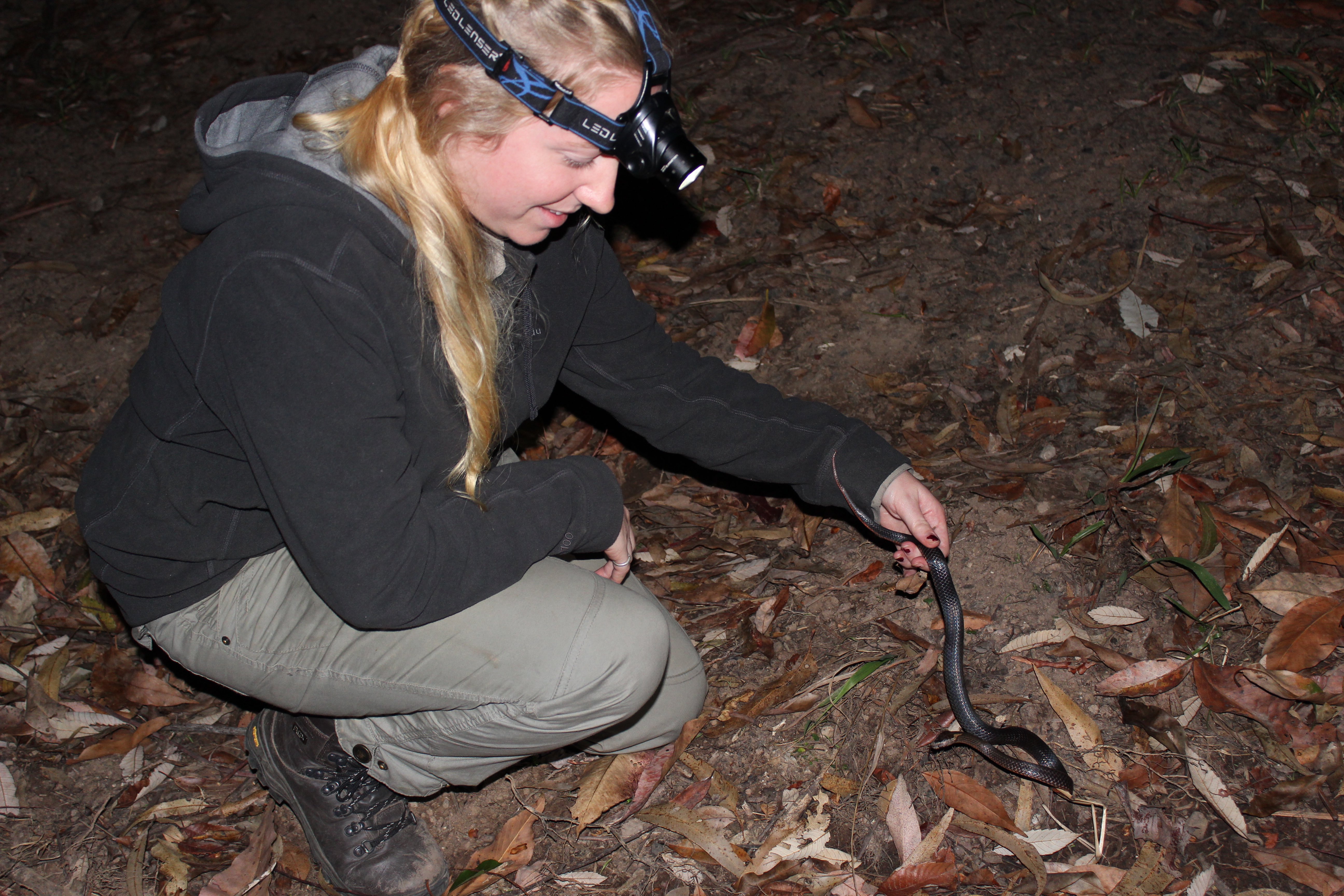 A toad-biologist who likes snakes - Sam McCann with a golden-crown snake. Photo by Matt Greenlees.

How far will cane toads spread through Australia?

The toads have already colonised from the Queensland coast westwards into the Kimberley, and will reach Broome on the west coast within a few years. They are also spreading slowly down the east coast, with the current front near Grafton. Isolated toads often turn up far from the main range, after having hidden away on trucks – so there is no part of Australia that is completely safe from them.

The toads can’t survive in really dry or really cold places (they evolved in the rainforest, after all) but they are very flexible. In some desert and semi-desert areas, the toads have penetrated along river systems. Even without rivers, the toads can move across the landscape after rains and so end up in isolated farm dams even in very dry areas.

Toads have recently been reported at quite high elevations in the Border Ranges (on the Qld-NSW border), and can adjust their physiology to function at low temperatures. This flexibility will probably allow toads to keep spreading, and eventually colonise areas that we currently think are too cold or dry for them. Stowaway toads founded a population within the suburbs of Sydney a few years ago, and bred successfully - so Sydney is within the toad’s potential range.