Fogg Dam - its environment and wildlife 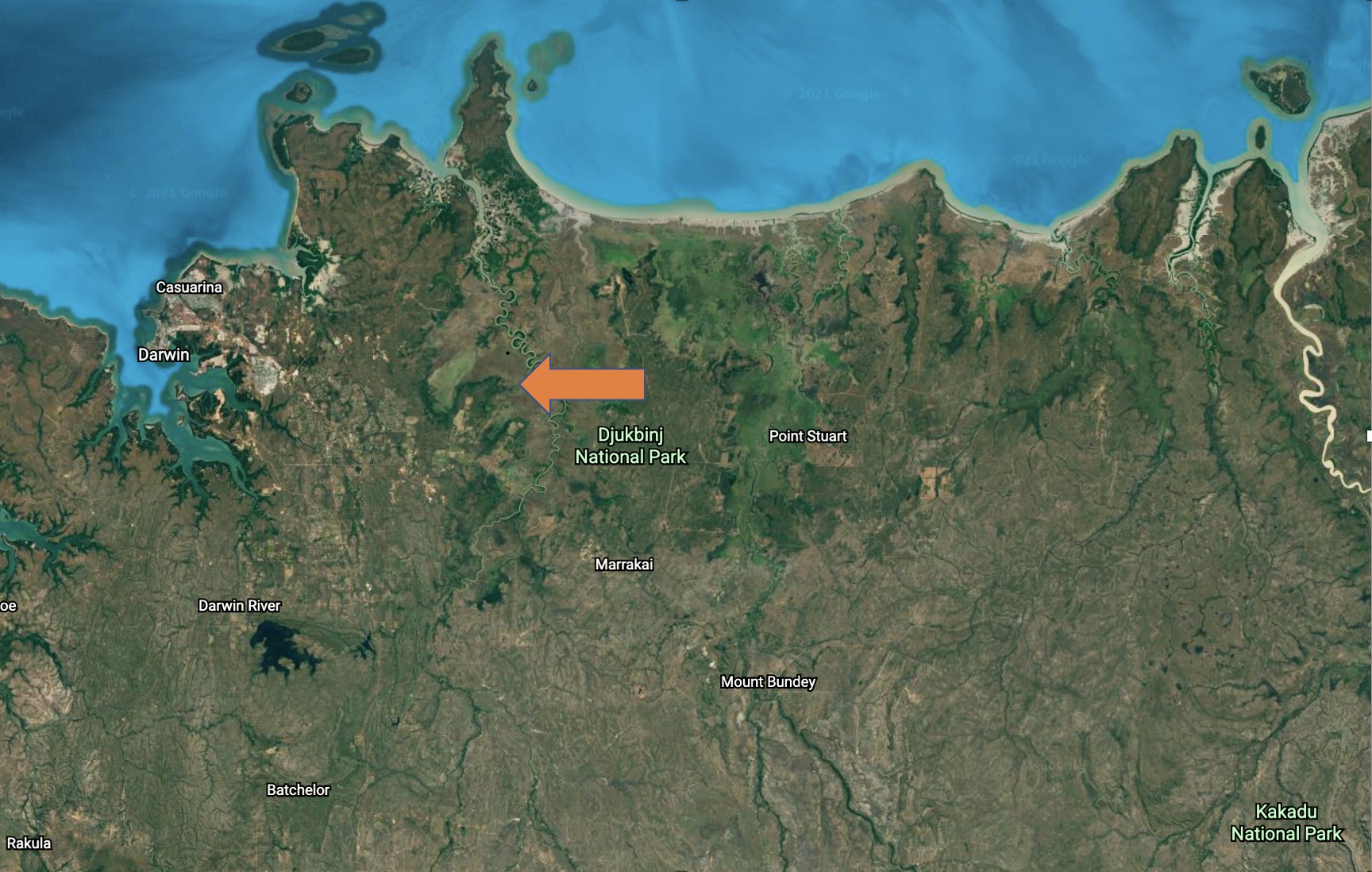 In tropical northern Australia, about 60 km east of Darwin, the Adelaide River winds through the low-lying landscape to form a huge meandering floodplain. Fogg Dam lies on a small tributary of that floodplain, and Beatrice Hill forms an area of higher ground to the east, near the Arnhem Highway. The orange arrow on the map points to Fogg Dam.

Rick’s love affair with Fogg Dam began more than 25 years ago. Just before he was about to head off on his first trip to the Northern Territory (to study filesnakes and goannas at Jabiru), he ran into Hal Cogger, the renowned expert on Australian reptiles. Hal has a lot of experience in tropical Australia, so he told Rick to check out Fogg Dam because of the incredible number of water pythons to be found there. Paul Horner of the Northern Territory Museum took Rick out there a few times during Rick’s overnight stays in Darwin, and sure enough, it was hard to drive across the dam wall without finding a python. This was remarkable to somebody used to searching for weeks to find even a single python in southern Australia!

So, this was just too good an opportunity to turn down. Rick started coming up every year to spend a few weeks catching and marking pythons, putting radio transmitters into the snakes to track them, and so forth. 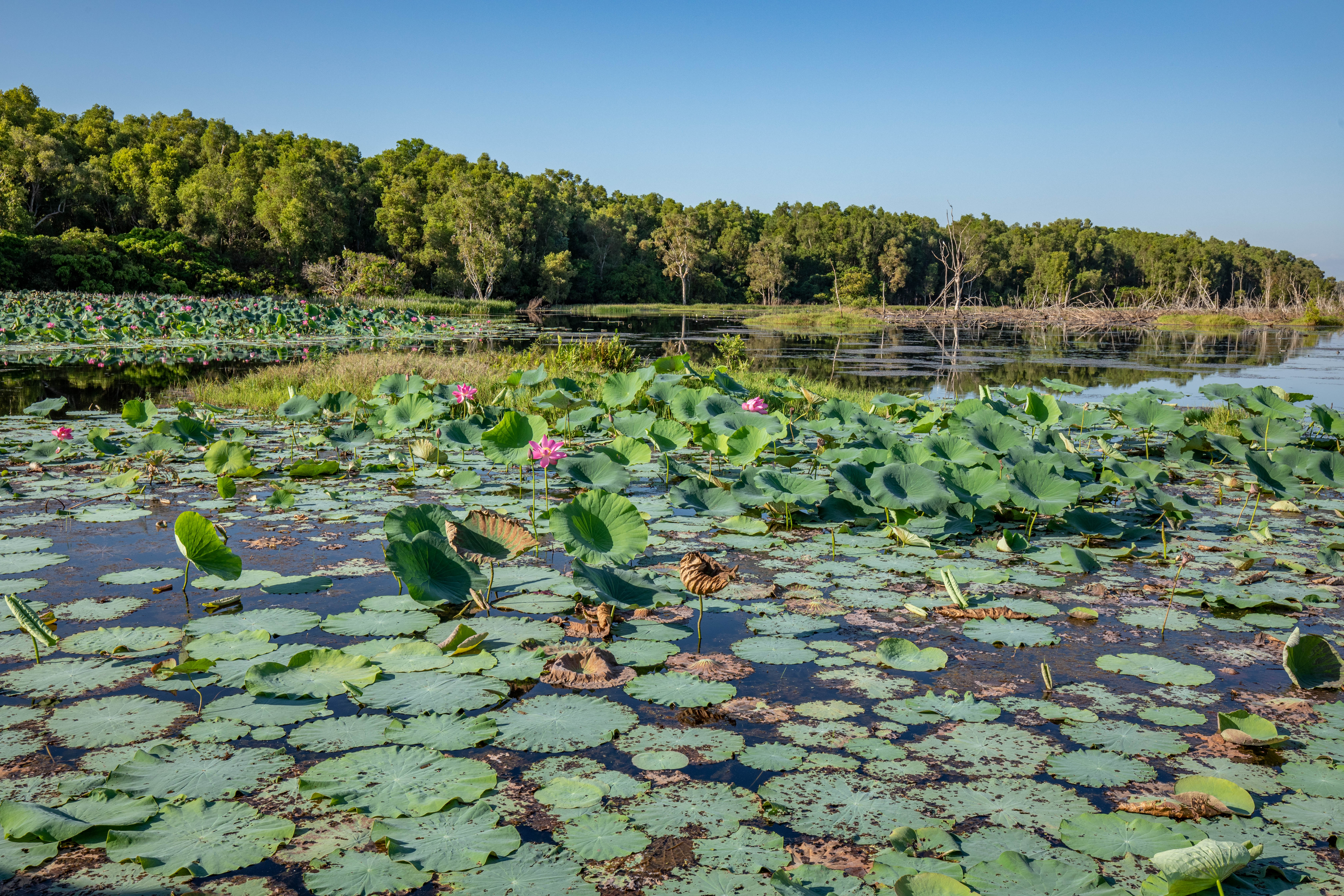 Fogg Dam was built in 1956 as a central part of an ambitious attempt – mostly funded by American entrepreneurs - to grow rice in northern Australia. The floodplain below the dam was divided into a series of paddy-fields that could be flooded seasonally, and the dam was built to provide a water supply. The dam was named after Mr JD Fogg, Managing Director of Utah Australia Ltd., a partner of Territory Rice Ltd. The scheme failed for a variety of reasons, much of it relating to problems with management. The rats and magpie geese got a lot of the blame for the rice enterprise failing, but most of the locals reckon it was just poor planning. For more information about Fogg Dam and its history, the Friends of Fogg Dam's web page is an excellent source of information.

A wallaroo enjoying a cool bath and a feast on aquatic vegetation. Photo by Simon Ducatez.

One spin-off from the Fogg Dam enterprise was the construction of Middle Point village, just a few kilometres from the dam (originally named “Humpty Doo”, but that name has now been taken over by the much larger area to the south). The village was originally built as a base for the CSIRO research team who investigated the ecology of the Fogg Dam system, and the feasibility of rice-growing. Although the business failed, much was learnt. For example, Redhead’s studies on the native dusky rats of the floodplain, and how their populations were affected by Cyclone Tracy’s arrival in 1974, are classic pioneering research projects. After the rice-growing attempt was abandoned, Middle Point village evolved into the base for the Coastal Plains Research Station, mostly devoted to agricultural enterprises. 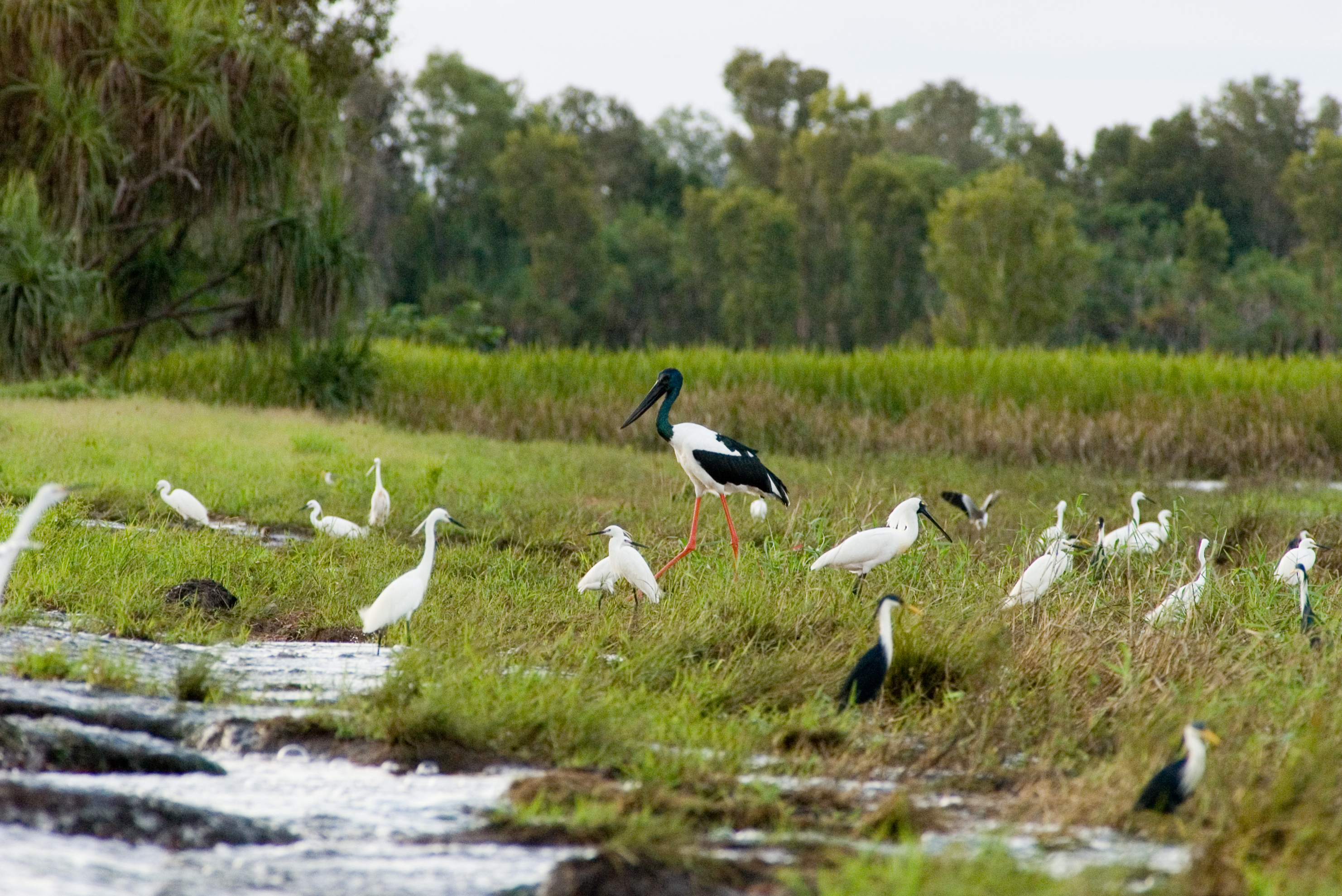 Fogg Dam has been a famous attraction for bird-watchers for many years. Photo by David Nelson.

Local politics and changes to agricultural practices gave the Coastal Plains Research Station a rocky ride. It eventually was closed, with the buffalo work moving to nearby Beatrice Hill Farm. Middle Point Village was then used for a variety of purposes, mostly as a base for the state government’s Parks and Wildlife Service. In 2005, they decided to move out to their own premises nearby – and just at the right time for Rick and the rapidly growing TEAM BUFO. With help from Barry Scott (the head ranger) and his staff, the village gradually transformed back into a research station – but now, a research station devoted to ecological research on the local amphibians and reptiles. Funding from the Australian Research Council enabled a rapid growth of our activities.

Our toad research has now expanded quite a bit, with extensive studies in Western Australia, Queensland and New South Wales - and even Hawai'i and South America - but Fogg Dam remains our heart and soul. 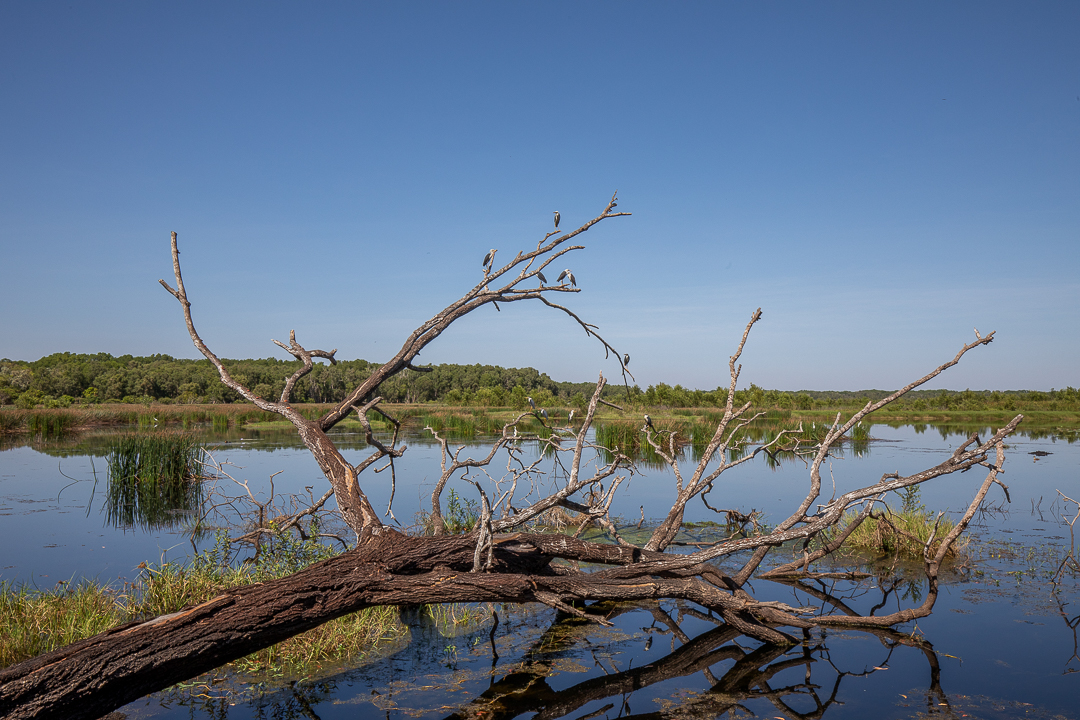 The scenery at Fogg Dam is amazing. Photo by Terri Shine.

Fogg Dam lies within the “wet-dry tropics”, with a really distinctive climate. It’s hot all year, with maximum daily temperatures close to 32oC year-round. However, the nights are much cooler during the dry-season (mid-year) when there are few clouds to keep the heat in. During the “build-up” (October-November) and the wet-season itself (December-February) the temperature can hover around 30oC all night as well as all day. The humidity at this time of year is incredibly high … and so it can be desperately uncomfortable. It’s no accident that Rick commenced his tropical field program at about the same time that air-conditioning became widely available in the “Top End”!   However, some of the members of TEAM BUFO are tougher than Rick – despite his Canadian heritage, Greg Brown looks forward to the warmer weather! 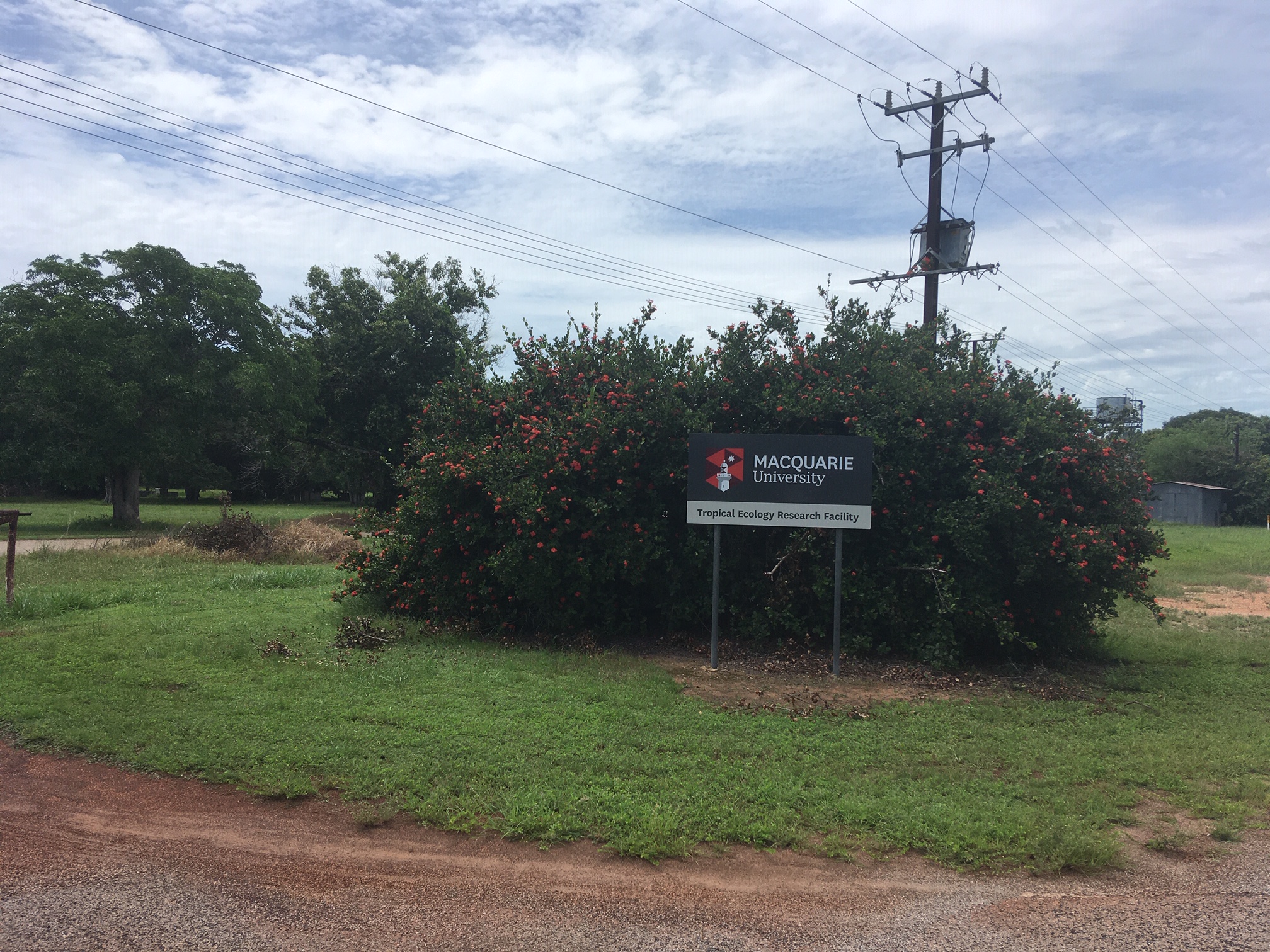 Our research station is a small village, just a kilometre from Fogg Dam. Originally under the control of Sydney University, it is now run by Macquarie University, Rick's new academic home. And so we changed the sign! Photo by Rick Shine. 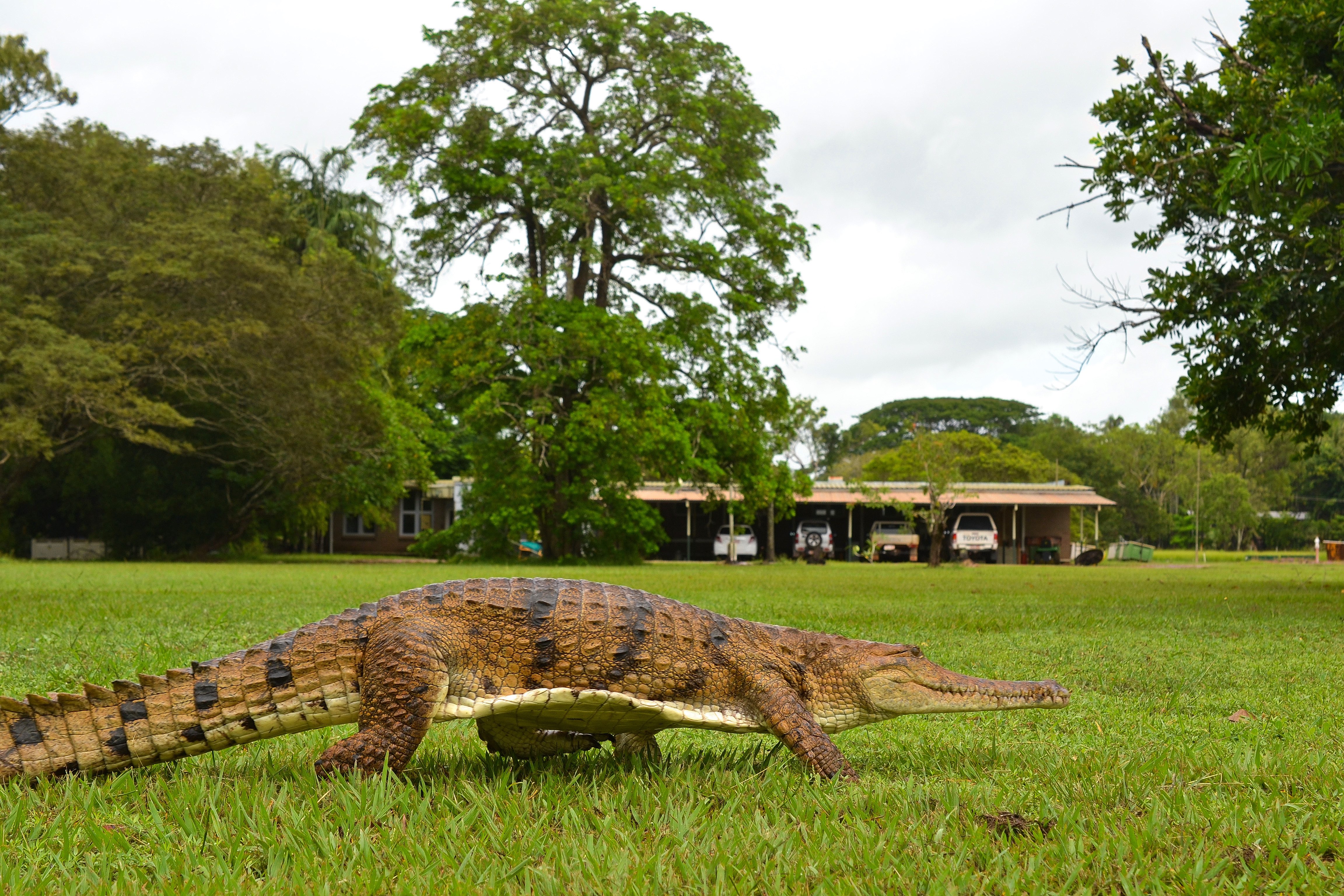 Living and working near Fogg Dam brings you into close contact with the wildlife. Here, a Freshwater Crocodile wanders around the grounds of the research station .

As the names “wet-season” and “dry-season” suggest, the rainfall is incredibly seasonal. The landscape becomes progressively drier through the long dry-season, and wildfires are everywhere, but the onset of monsoonal rains changes that situation dramatically. Almost overnight, the vegetation bursts into life. The savannah woodland is dominated by Darwin wooly-butts and stringy-bark trees, but the understory of grass and shrubs responds quickly to the increased moisture levels. 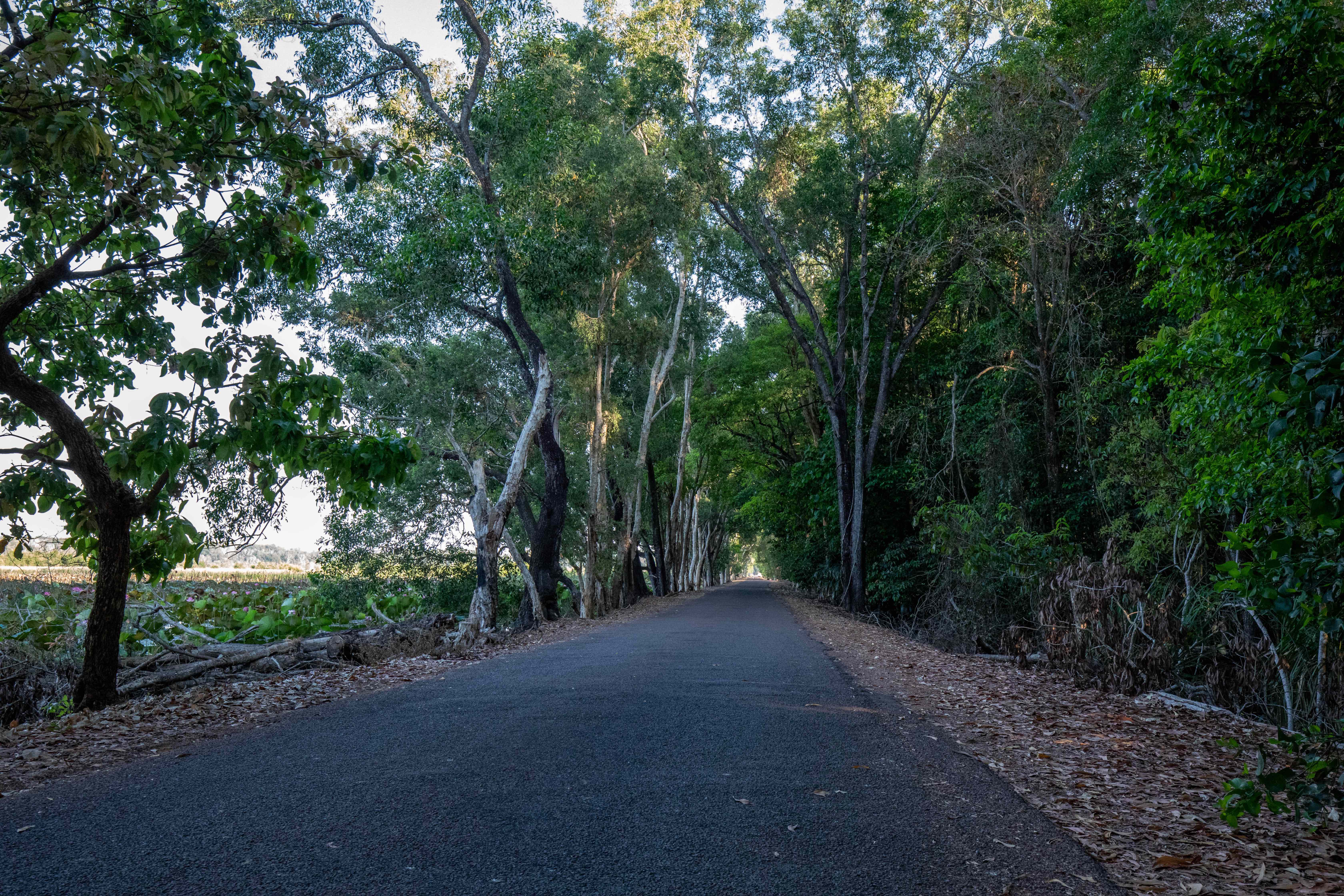 The wall of Fogg Dam during the dry-season. Photo by Terri Shine.

And the fauna responds as well. With the changing of the seasons, the bird species change. Desert-dwelling species head back down south to the drier country, and many of the waterbirds (geese, ducks, egrets and the like) that have congregated around the shrinking water bodies can disperse across the landscape. The native frogs have mostly spent the dry-season inactive in burrows or hidden in tree-hollows, but they emerge with the first rains and many begin to breed as soon as water bodies form. Some of the small reptiles also are inactive during the Dry, and become more active as the Wet arrives. For example, the spectacular frill-necked lizard hides away in tree branches during the Dry, but can be seen scurrying on its hind legs across the ground as soon as the rains arrive.

Many people think of the tropics as being the same year-round, but the wet-dry tropics are incredibly seasonal. The main thing that changes from month to month is not temperature (as in southern Australia) but rainfall. And so we see really strong seasonal patterns of activity in most of the local fauna, and reproduction is restricted to specific seasons. For example, keelback snakes and water pythons at Fogg Dam lay their eggs in the dry-season, whereas slatey-grey snakes lay during the wet-season. For most species of native animals, of course, we still don’t know what times of year they reproduce – the tropics have an incredibly diverse fauna, and we know very little about most of them.

What animals can a tourist expect to see at Fogg Dam? Well, it depends very much on what time of year you are there, and what time of day. Everybody will see a lot of waterbirds – egrets, magpie geese, whistling ducks, burdekin ducks, and the like, with an occasional jabiru or brolga. On the roads, hawks are very common; a plume of smoke from a wildfire during the dry-season can bring hundreds overhead. For the experienced birdwatcher, there are lots of less common species – for example, the rainbow pitta is a gorgeous inhabitant of the monsoon forest fringing the dam. And people from southern Australia will see lots of familiar birds, from spur-winged plovers to magpie-larks. 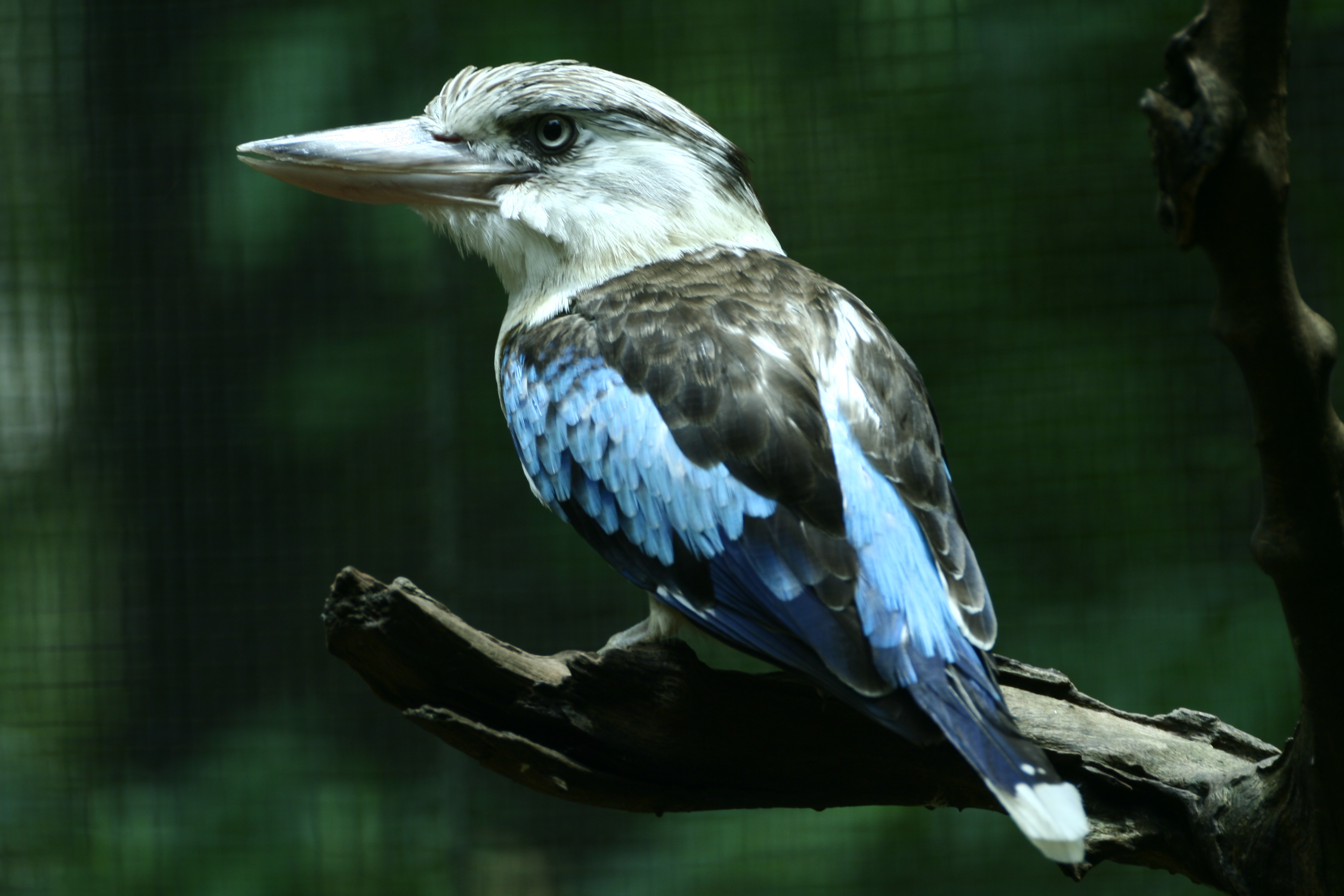 Blue-winged Kookaburras are common around Fogg Dam, and in our research station. 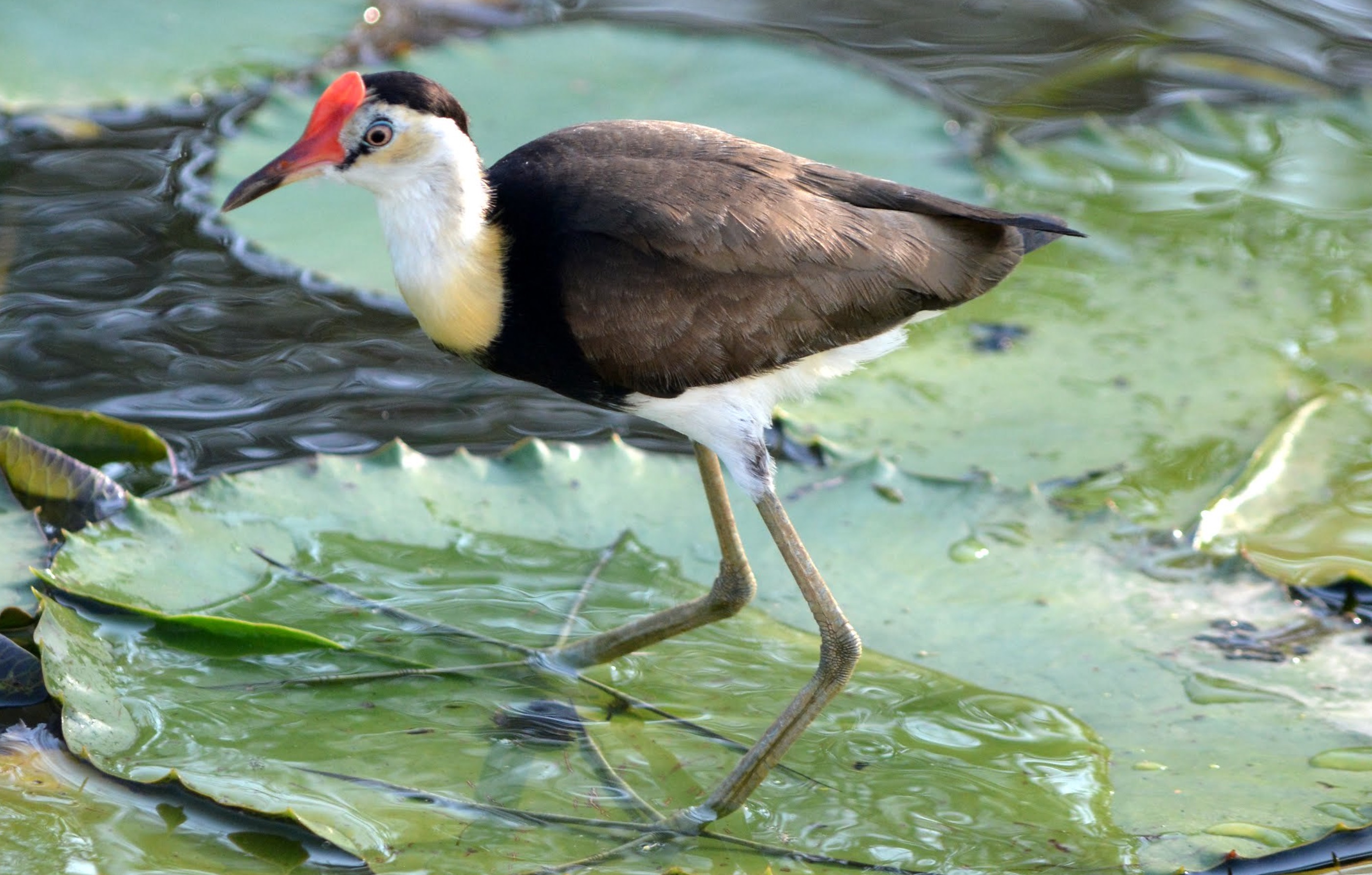 The enormous feet of the Jacana spread its weight over a large area, enabling to walk across lilly-pads without sinking.

Mammals are harder to see, except for agile wallabies in the woodland; these beautiful little wallabies move out into open areas near dusk. Dingos are common, and anybody driving the roads after dark may see smaller mammals like northern brown bandicoots, water rats, dusky rats, and small planigales (carnivorous marsupials). The numbers of dusky rats vary from year to year, but can be quite astonishing – surveys suggest that the featureless floodplain often contains literally tons of rats per square kilometre. The rats live almost the entire time down cracks in the floodplain soil, so are hard to see even when they are common. Feral cats and wild pigs are regular visitors to Fogg Dam also. 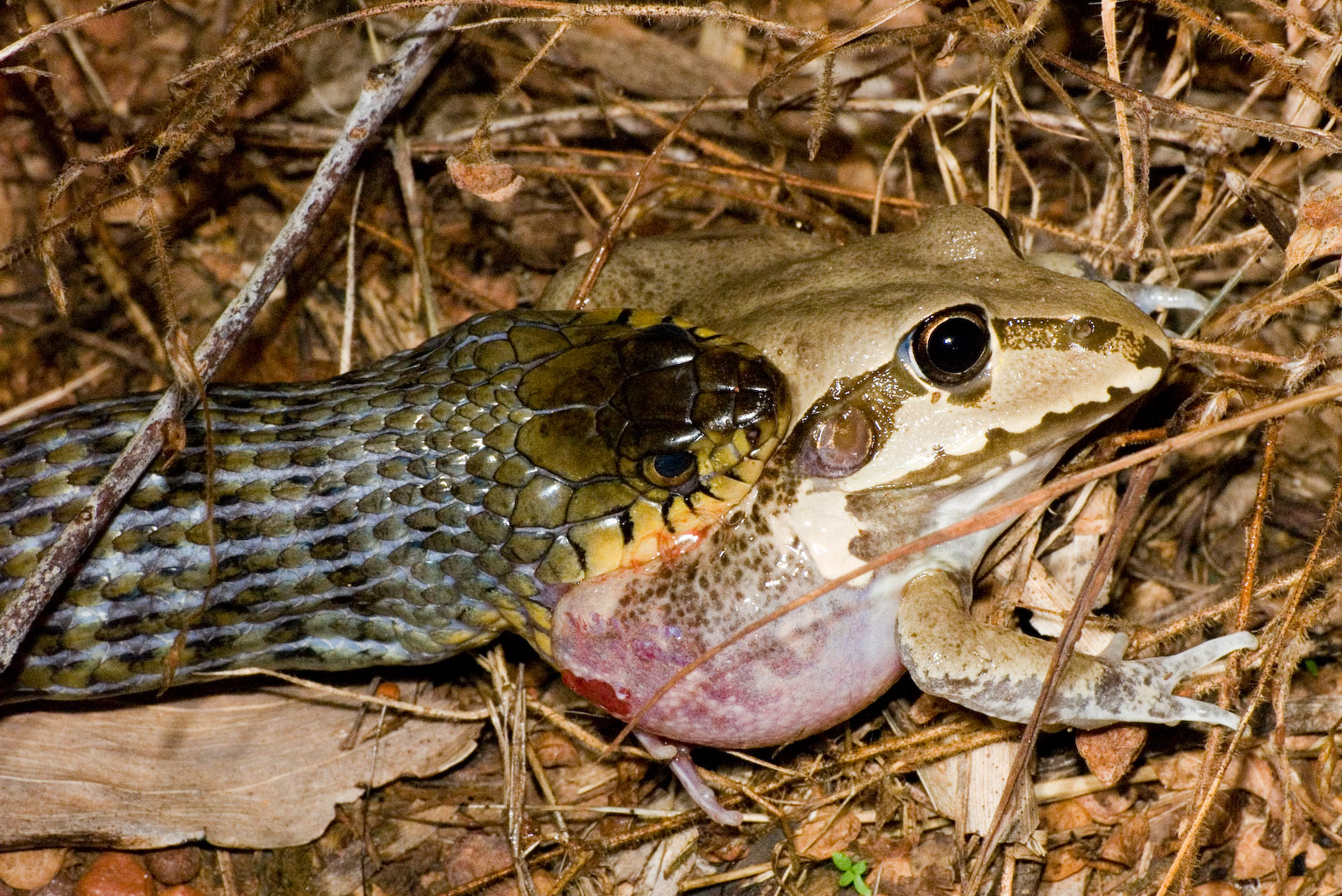 Fogg Dam is full of frogs, and is also full of snakes that like to eat frogs. This keelback snake has found a tasty meal. Photo by David Nelson.

As you'd guess from it being TEAM BUFO's primary study site, reptiles and amphibians are diverse and abundant at Fogg Dam also. The cane toad invasion has killed most of the big floodplain goannas but they seem to be making a comeback (slowly). The smaller goanna species in the surrounding woodland seem to have been less affected by toads. Elegant little two-lined dragons and the extraordinary frillneck lizards are common also. Skinks of various kinds zip rapidly through the open spaces by day, sometimes pursued by equally quick whipsnakes. At night, geckos emerge from their daytime retreats to feed on bugs by lighted windows, and the snake-like Burton's Legless Lizard prowls across the land. A walk along Fogg Dam at dusk likely will reveal skinks and snakes, with perhaps a long-necked turtle or two, and the eyes of both freshwater and saltwater crocodiles reflecting the spotlight from out in the water. The most common snakes - water pythons, keelbacks and slatey-grey snakes - have all been longterm study species for TEAM BUFO.


The Friends of Fogg Dam web site is worth visiting for more information.