OUR RESPONSE TO THIS MYTH

Our comments about the myth of the toad-eating frog (see our CONTROL MYTHS page) brought an immediate and vigorous response. We wrote that the stories about Dahl’s Aquatic Frog being able to eat cane toads, although widely reported, aren’t true. Our research has showed that the frogs are vulnerable to the toads’ poison; but fortunately, most learn quickly not to eat toads, so they survive.

Graeme Sawyer (a leading Darwin toad-buster, and Lord Mayor until recently) doesn’t agree with us. He wrote: "I am appalled that you would print such nonsense without reference to other research and that you would not try to verify some of the information you have selectively quoted.

I have personally watched dahlii eat cane toads and toad tadpoles and survive. I have no doubt some die but some don't, I thought this was the basis of your arguments about rapid evolution. The dahlii were collected from behind the toad line so the ones that could not eat toads may have died. The fact that we have not seen a lot of dahlii that eat toads and their tadpoles may not actually support rapid evolution? "

Thanks for your comment, Graeme, but I fear that we don’t agree.

First, why didn’t we refer to other research? The answer is simple: there isn’t any. So far as we know, TEAM BUFO are the only group looking at this topic. The original story about the toad-eating frog was just based on a few animals kept in a tank, with casual observations not scientific study.

Second, why haven’t we tried to verify the information we present?

The scientific paper with these results has been published in a major journal (see Rick's University of Sydney website for a list of all scientific papers). We will summarise some of the details.

Our results were clear-cut:

(a) 40 of the 40 tadpoles of Dahl’s Aquatic Frog attempted to eat toad eggs, and they all died immediately. In the field, we often find dead frog tadpoles in water bodies immediately after toad spawning.

(c) When adult Dahl’s Aquatic Frog were first offered toad tadpoles, they attacked them but in all cases, regurgitated the toad tadpole. None of the frogs died. When retested a week later, the frogs ignored toad tadpoles – they are fast learners, and have good memories! 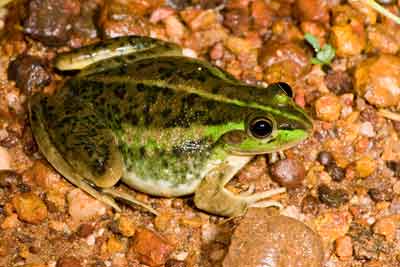 In all of these respects, Dahl’s Aquatic Frog resembles other frog species in the same area. For example, their rates of mortality due to encountering toad eggs, tadpoles and metamorphs are similar to those of several other frog species that we have tested. Clearly, the supposed "toad-eating frog" cannot tolerate the poisons in any life-history stage of the invasive cane toad. That doesn’t mean that some Dahl’s Aquatic Frogs don’t eat baby toads and survive – they do, and this is what Graeme saw – but the overall picture is that this species is just like other local frogs, and responds to toad invasion not by gobbling up lots of baby toads, but by rapidly learning to leave these noxious little intruders alone.

We have very strong evidence of rapid evolution in some species that interact with cane toads, but in lots of other species (probably including Dahl’s Aquatic Frog), the predators are so good at learning quickly that they just delete toads from their diet – and so, there really isn’t much evolutionary pressure for them to adapt to toads – they can deal with them simply by learning not to eat them. Matt Greenlees conducted detailed comparisons of these and other frog species in areas where toads haven't yet arrived, where they arrived recently, and where they have been present for quite a few years - and he found that Dahl's Aquatic Frog has managed to deal with cane toads in the same ways as other frog species have done. 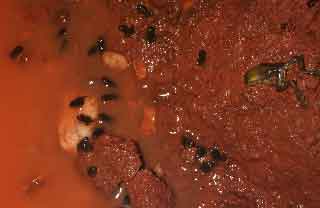 Finally, although we disagree about Graeme's interpretations, we appreciate his comment because it identifies a specific point of disagreement, and gives us an opportunity to explain the detailed scientific evidence behind our statements on the website.

To read our paper on this subject, click on this link.