A central issue for any approach to toad control is its feasibility. We doubt that any of the current methods (like hand-collecting adult toads) are feasible ways to reduce toad numbers in the long term, based on our surveys of toad numbers before and after "toad-busting" exercises by community groups. So, we have suggested some new approaches based on the outcomes of TEAM BUFO's research.

On other pages in this website, we’ve explained these new ideas about how to go about controlling toads (see OUR NEW IDEAS page), and how to reduce their ecological impact (see REDUCING IMPACT page).

Would our new approaches really work?

There are three critical issues: effectiveness, the risk of collateral damage, and logistical feasibility.

In terms of effectiveness, all we know at the moment is that in laboratory trials and in outdoor experimental ponds, the suppression pheromones kill huge numbers of tadpoles and baby toads (vastly more than you could ever imagine being killed by traps, fences or hand-collecting).  And the attractant pheromone works well too. When we use toad poisons as bait in funnel traps, we catch tens of thousands of cane toad tadpoles (and almost nothing else), and our surveys around those ponds suggest that we have managed to catch all (or nearly all) of the toad tadpoles.

It’s hard to see why the same thing won’t happen over broader areas in the field, but obviously we need to check. The same is true of predator learning – it works well in the lab, and our work on quolls and bluetongue skinks and yellow-spotted monitors shows that it can work in the field also. In the case of northern quolls and goannas, we have really solid long-term evidence that aversion training is incredibly effective in the field.

This doesn't mean that all of our ideas will work - for example, we've explained elsewhere why our ideas on using parasites for toad control ran into a dead end - but some of those ideas are now producing better results than anything else that has been tried so far, so we think it's worth giving them a try.

Many predators, like this marsupial Dunnart, rapidly learn to avoid cane toads.

In terms of collateral damage, tadpole pheromones don't affect native frogs (or any other native animals, so far as we know). The same is true for our tadpole trapping - the tadpoles of native frogs are repelled by our "bait" (the poison from cane toads) whereas cane toad tadpoles are strongly attracted. So, the risks are very small. The "teacher toads" may well kill some native predators (if the predator is too small and the toad is too big, or the predator is really sensitive to toad poisons) - this is a shame, but these are the animals doomed to die anyway as soon as the toad front arrives. And the "teacher toads" can also help to slow that toad invasion, so will save many other predators.

Is this scheme logistically feasible? Well, our new methods are a lot simpler than most of the ideas that other researchers have suggested. The toad pheromones are not too hard to work with. The tadpole-attractant can be made from the poison secreted by adult toads, and we are zeroing in on the suppression pheromone in our current studies. We are working out the chemical nature of the molecules involved (or more accurately, our collaborators at the University of Queensland are doing this) so we can just use pure chemicals for this purpose. 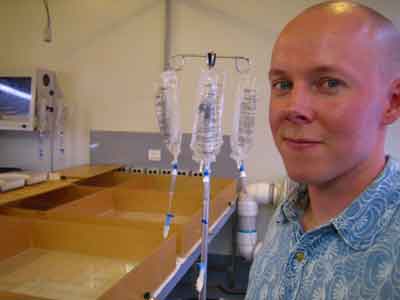 So, the biggest challenge is going to be the practical issues: such as how to get toad-tadpole traps into all of the waterbodies in a local area, or how to actually spread the pheromones and “teacher toads” out into the wilderness. For this reason, we have designed the scheme for local community involvement. One of the strongest weapons that Australia has in the fight against cane toads is these enthusiastic, well-organised groups of local people – and we need to take advantage of that incredible resource. With their local knowledge, community groups could identify the best places to deploy tadpole traps, and spread suppression chemicals (and perhaps "teacher toads" in advance of the front) for toad control.

In addition to the new “weapons” (attractant and alarm pheromones) that we have discovered for controlling toads, our current work suggests a series of other possibilities as well – and in a number of cases, these dovetail really well with the broad approach outlined above. For example, we are looking at other pheromones that toads produce – especially, one that may discourage female toads from laying their eggs in a particular pond.

If we can isolate the “discouragement” pheromone, we could use it to concentrate toad breeding in a few ponds rather than have it spread across many ponds - and thus increase the effectiveness of all of our other control methods, as well as use the toads to help control themselves by competition, cannibalism, and the like. 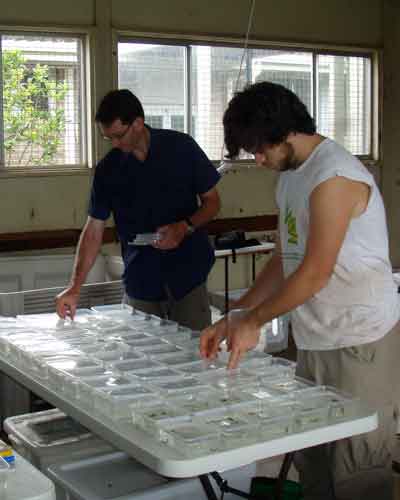 Almost all the funding for TEAM BUFO’s research has been for “pure science” (from the Australian Research Council), not for developing methods to control toads. However, we are really encouraged to see that our scientific discoveries have already identified several new approaches to cane toad control – and ones that we think will be more effective, and less risky to the native fauna, than any of the other ideas that have been suggested.

We're not claiming that these ideas are the ultimate in toad control - scientific research works by a gradual process of suggesting ideas, testing them, refining them, and so on. The eventual failure of the parasite approach shows how that can happen. But the emergence of these new ideas from our work on the ecology and behaviour of cane toads strongly supports the idea that to control an invasive species, our first step should be to understand it.