Dr Ben Phillips is a foundation member of Team Bufo – indeed, Ben’s Ph D research on effects of cane toads in Queensland was our first major study on toads. Ben set out to understand how big frog-eating predators – especially snakes – had managed to survive the invasion of the highly toxic toads.

Remarkably, he found very rapid evolutionary changes – snakes from toad-infested areas had evolved not to eat toads, and to be more able to cope with the toad’s poisons. The snakes had even evolved smaller heads, so that they were not able to eat a toad big enough to kill them. 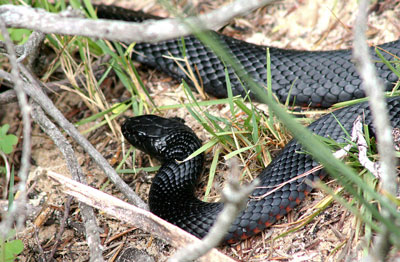 Red-bellied black snakes have been severely affected by cane toads, but are evolving to be able to survive even in areas where toads are common
(photo by Sylvain Dubey).

Ben then moved to Fogg Dam for his postdoctoral work, just in time to start gathering information before the toads arrived. In combination with Dr Greg Brown’s radio-tracking of toads, Ben found that the toads were moving much faster than people had expected. That observation led him into mathematical models to help understand why toads had changed in this way – and discovered that it is a result of evolutionary processes at the invasion front (see our INVASION page). 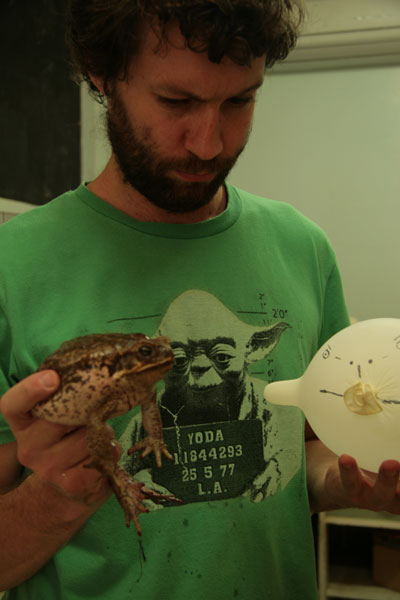 Ben builds mathematical models of toads to help understand what real toads do. Here he is pretending to compare a model toad’s behaviour to a real one (photo by Terri Shine).

The invasion studies and models told us a great deal, but more detailed biology was needed to uncover some of the secrets. For example, are the distinctive shapes (long legs) and behaviours (rapid dispersal) of invasion-front toads actually due to genetic differences from older populations? The local environment can sometimes affect characteristics like this – for example, human athletes can actually show different types of bone growth depending on what sports they play. To see if the characteristics of invasion-front toads are due to genetics or the environment, Ben ran a huge experiment. First, he collected adult toads from across the toad’s Australian range from Cairns to Timber Creek (on the Western Australia-Northern Territory border), brought them all to Fogg Dam, and released and radio-tracked them to see how far they moved in a week. Then he collected them again, and bred them so he could raise their offspring in captivity, under constant conditions. It was an enormous amount of work to raise the babies from eggs through to adulthood, but he did it. And then he tested those offspring, to see if they behaved like their parents.

The results were really exciting. Captive-raised toads whose parents were collected in the “old” populations (like Cairns) are fairly slow growing, and don’t move around too much. But toads whose parents came from the invasion front are much faster growers, and traveled further when Ben radio-tracked them in the same area he had tracked their parents a year or two earlier. This is clear evidence that it is evolutionary processes, not just local conditions that are shaping the bodies and behaviours of cane toads in Australia.

Ben left Team Bufo at the end of 2009, to take up another job in the Kimberleys, and from there he moved to Townsville to take up a job at James Cook University. And since then, he moved again - the University of Melbourne. However, we hope to keep collaborating with him for many years to come.