Ligia is a Brazilian scientist, who first came to Fogg Dam to study snakes. But Rick talked her into joining the toad research program, and she has now conducted several studies on baby (metamorph) toads - the stage just after the tadpole grows legs, loses its tail, and emerges onto land. Ligia has finished her toad studies now, and moved to other employment. But, we are still working with her on some of the toad and frog studies.

Ligia’s first toad studies were on cannibalism. The baby toads are active by day, whereas larger toads only come out at night. We suspected that this was because a small toad that moved around at night would be gobbled up by one of its larger relatives – and that’s exactly how it turned out. Some of the larger juvenile toads that sit beside the ponds during the dry-season are specialist cannibalism, with over two-thirds of their diet composed of smaller brethren. 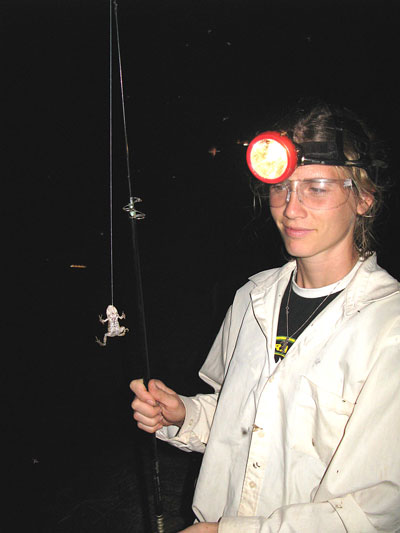 To investigate toad cannibalism, Dr Ligia Pizzatto went “fishing” for cannibal toads, using dead metamorph toads as the bait. These trials showed us that a baby toad is at great risk of being gobbled up if it moves around at night (photo by Dr Christa Beckmann).

Other studies on toad parasites by Dr Crystal Kelehear and Dr Sylvain Dubey suggested a new project. The cane toads in Australia often have lungworms, and Crystal showed that these parasites can seriously affect small (metamorph) toads (see NEW IDEAS webpage). Genetic analyses by Sylvain and Rick showed that the lungworm is a South American species, not an Aussie frog parasite as people had previously believed. So – the big question is whether the toad parasite can switch across to attack Australian frogs. If it can, we may have a real problem – a new type of impact of the toads (infecting native frogs). If it can’t, we may have a possible control for toads – by spreading the lungworm around to places it doesn’t occur, and perhaps trying to build up its numbers in places where toads breed. 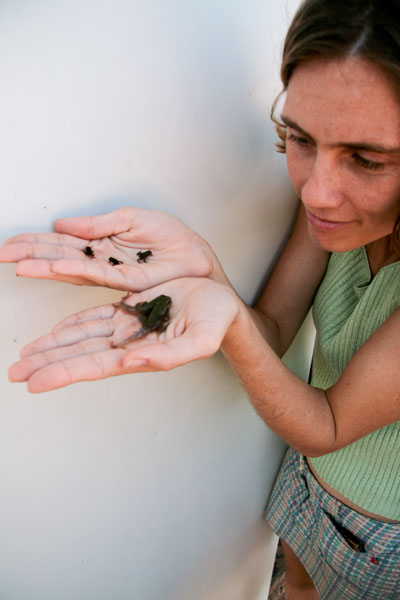 The Western Australian Department of Environment and Conservation recognised that this was a critical issue, so they provided funds for a project to discover if the toad’s parasites are a danger to Aussie frogs. Ligia conducted that study. It’s fiddly work – the baby frogs and toads are tiny, and difficult to rear in captivity – in nature, 99% of eggs probably never make it through to adulthood. But Ligia managed to develop successful methods, and the results are fascinating. It looked like the toad lungworm WILL infect native frogs, but generally it doesn’t survive for long inside the frog, and doesn’t seem to do as much damage as it does to a toad. So it was  very encouraging – we might be able to use the lungworms for toad control, without having to worry too much about collateral impacts on our native animals.

But unfortunately, we found out that some native frogs are at risk. The Magnificent Tree Frog easily takes up the toad lungworm and dies. So now we know that this parasite is not the answer for toad control - we can't go around killing native frogs just to kill a few toads. And as we looked further into the effects of the parasite, we found that it often doesn't really have much effect on cane toads any way - not even on tiny ones.

So, although it was our own research that suggested lungworm parasites could help in controlling toads, we now know that it won't work, and will cause problems for native frogs. That's how science works. Not every good idea pays off, and the idea of using lungworms to control cane toads is now consigned to the dustbin of history. 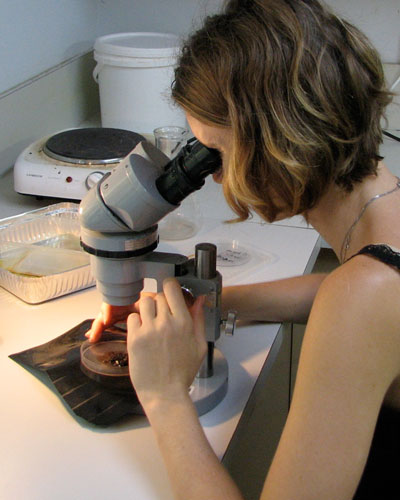