Australian scientists have been encouraged to think about other control options for cane toads because of the strong concern about toad impacts from the general public. And that concern has also encouraged various scientific bodies to form committees (always the first response by a bureaucracy to any problem!) and hold meetings. 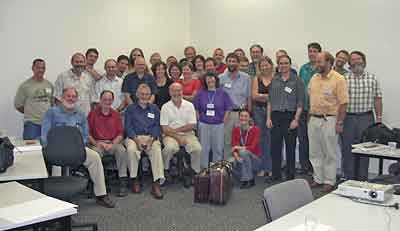 Other control options for cane toad control have been discussed many times, and a lot of the same things have been said many times. We don't want to repeat it all here. Our feeling is that until very recently, there weren't too many new ideas emerging about toad control. That situation reflects the difficulties of the task (toads are a difficult enemy!) and the lack of detailed information about toad biology and impact. Team Bufo's recent research on ecology and behaviour of toads at the invasion front has helped with the second of these problems, and our ideas about new approaches to toad control are explained in another page on this website (see OUR NEW IDEAS page).

So, what kinds of methods have been suggested to control toads? We think the main ideas are as follows:

(1) Diseases from the toads' native range

Maybe the toads' success in Australia is due to leaving diseases or parasites behind. If so, maybe we could find toad-killing diseases in South America, then bring them here to attack the Australian toad populations. CSIRO looked into this. They found toad-killing viruses but unfortunately these also killed Australian frogs; that is, they weren't specific to toads. So it would be foolish to bring them to Australia, and CSIRO wisely abandoned the attempt.

But recent research by Alice Russo has rekindled interest in this idea. Because we managed to sequence the cane toad's genome, Alice was able to search for bits of virus DNA that have become embedded in the toad's genetic program (that's how viruses work - they co-opt host genes to make copies of themselves). And sure enough, she found a few. So we now know about viruses from the toad's native range in South America, that didn't make it to Australia, and might be deadly to toads. Of course, they might also be deadly to Aussie frogs, like the ones that CSIRO found many years ago - so that risk would have to checked very carefully before we thought about using them to control toads in Australia..

(2) A genetically-engineered virus to kill toads

Because Australia doesn't have any native toads, maybe we can exploit the genetic difference between toads and frogs to build our own toad-killer? CSIRO has been trying to genetically modify a naturally-occurring virus so that will spread through the environment and infect toads. The basic idea is to fool the toads' immune systems into thinking that adult toad proteins are foreign, and so mounting an attack on them as the tadpole develops into a toadlet. There are huge technical problems to getting this approach to work; and even if it worked, it would be difficult to convince lots of people (including TEAM BUFO!) that the virus wouldn't one day switch species and kill frogs as well as toads.

But even if that problem could be overcome, a toad-killing virus would be a disaster if it spread from Australia. Every other continent on the planet (except Antarctica) has lots of native toads - including Asia, right on our doorstep. Imagine if the virus killed all the toads in Asia, Europe, Africa, North and South America and Europe - the effect on biodiversity would be disastrous! Even if the virus only killed cane toads and closely related species, release of the virus in South or Central America would massively impact those ecosystems - far worse than cane toads have done in Australia. So we are deeply skeptical that genetic engineering of this type could be an answer to Australia's cane toad problem.

It seems to us that the CSIRO viral approach is like a group of scientists in California deciding to build a genetically engineered virus to kill Australian gum trees that are invasive species in the USA. Even the slightest possibility that such a virus could reach Australia would create a risk of such immense ecological devastation that the "solution" to invasive gum trees would be worse than the problem - and so, the approach wouldn't be worth contemplating. We feel that the same is true for toad-killing viruses. Fortunately, the CSIRO seems to have reached the same conclusion - and is not going to proceed with this approach.

A CSIRO scientist from Hobart, Dr Ron Thresher, has suggested a very interesting approach that avoids most of the problems of the "genetically-engineered virus" discussed above. (Ron is a good friend of ours and a longtime fishing companion of Rick’s; indeed, Rick suggests that Ron probably had this excellent idea as a result of lots of spare time on unsuccessful fishing trips).

Ron’s idea is to genetically modify toads (or carp, or foxes, or whatever) so that they can only produce sons not daughters. In all other ways the modified animals would be identical to the normal ones. Then, if you released enough of these modified animals, the population sex ratio would become more and more highly male-biased - and eventually would fail to include any females at all, and thus go extinct.

It wouldn't matter if the "daughterless" genetic strain escaped to South America - it wouldn't do any harm to the local toads unless the majority of the local population had the modified gene. There are lots of technical challenges to making this approach work, and some issues about whether it's really a good idea to release lots of extra toads to control local populations, and so forth - but we suspect that it's worth following up this kind of research. It will probably take a long time to develop – but if it works, it could be a really valuable weapon in the fight against many invasive species, not just cane toads.

The traps that people currently use to catch cane toads do work, but they don't really catch many toads compared to the numbers that are out there. If we could attract more toads to a trap, however, perhaps we could do much better.

Most traps rely on lights to attract insects, that in turn attract toads. "Frogwatch" in the Northern Territory has suggested that UV lights might be especially effective, although they didn't do any detailed scientific study on that issue. Professor Ross Alford and Dr Lin Schwarzkopf (James Cook University) found that playing tapes of cane toad calls was effective in increasing capture rates, though again the overall rates were fairly low. Ross and Lin also have worked out what kinds of lights work best.

Dr Michael Crossland from TEAM BUFO has found a powerful tadpole attractant substance, and if put into a funnel trap it works well to catch tadpoles from natural ponds. We are currently collaborating with biochemists to try to work out exactly what chemicals are important in attracting the tadpoles.Our "tadpole control" page talks about this exciting work.

Professor Michael Mahony and Dr John Clulow from Newcastle University have championed this approach. The idea is to release lots of sterile males, so they outcompete the wild males and take most of the matings - and thus, most of the eggs laid by females are infertile. The approach has worked well in controlling some kinds of insects that are agricultural pests.

Michael and John have done some really interesting work to develop ways to generate sterile males and so forth (see CANE TOAD SEX page), though people have questioned the feasibility of controlling toads by releasing lots of extra toads. It might be an option at the invasion front, as we discuss in another place on this website - especially in combination with some other methods (see OUR NEW IDEAS page).

There are other high-tech suggestions also, including some by chemists (like Professor Rob Capon and Dr Andrew Hayes, at the University of Queensland) that involve finding out more about the toad's basic physiology and biochemistry.

Lastly, we should stress that scientists often disagree - and many of the people whose work we've mentioned above may disagree (perhaps violently!) with how we've described their approach and so forth. We'd be happy to talk about any of those disagreements, to correct any errors in our text, and to add any new ideas.