Research by TEAM BUFO, and by other groups, have explored new ideas about how to eradicate - or at least control - adult cane toads.

In another page on the website, we’ve described how we found out that the lungworm that infects Australian cane toads is a South American species – a parasite that the original toads brought with them when they were shipped to Australia in 1935.

One obvious possibility is that these lungworms might be useful in controlling toads, but the story of our research on lungworms in toads is a roller-coaster ride – lots of ups and lots of downs. That’s how science happens. Our first studies were in 2006, when Crystal Kelehear joined TEAM BUFO. Working with Ben Phillips, we discovered that the parasite is common in Queensland cane toads, but had only recently arrived in Northern Territory cane toads. The parasites slow toads down, so lags behind the fast-moving toad invasion front. Infected toads are too slow to keep up. That suggests that we might be able to slow down the toad invasion by releasing lungworms at the invasion front.

But first, does the lungworm have enough impact on its host to be a useful toad-controller? Crystal infected baby toads in the laboratory, and found that the lungworm was devastating for the tiny animals - about 30% died, and the remainder grew more slowly, moved more slowly, and so on. The parasite was especially lethal to very small toads – so transforming from the tadpole stage at a small size (as happens if the tadpoles are exposed to the alarm pheromone) makes the baby toads really vulnerable to the lungworm. 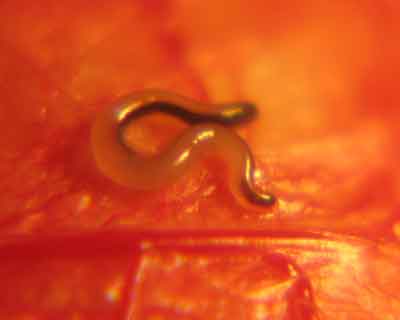 Later, we followed that study up with research on older, larger toads. Crystal and Greg Brown found that lungworm-infected adult toads grew more slowly than lungworm-free animals, both in the lab and the field. Promising! And a few years later, Honours student Patt Finnerty decided to look at the lungworm impacts again, but in a different way. By chance, that year was very dry, and the toads were in very poor condition. Patt found that lungworms were the final straw for some of them. His approach was simple but powerful – catch and individually mark toads, then release them back into the field– but half of the toads were injected with a lungworm-killing drug before they were released. When Patt went back out to recapture his toads, he found that getting rid of their lungworms was a huge benefit in such tough conditions, when toads were already under stress. The de-wormed toads survived better, grew faster, and were more active. The same was true of captive toads.

So far, so good – at least, fairly good. We might be able to spread the lungworm parasites to toads at the invasion front, and kill many of the baby toads as they emerge from the water. But there's a problem - the lungworms are bad news for toads, but they aren’t a knockout blow. If the soil is dry, the lungworm larvae die before they can infect another toad.  And if toads are in good condition, lungworms may be unpleasant but don’t pose too many problems for their hosts.

Still, the results were encouraging enough to make us check out the next critical issue. Could the lungworms in toads transfer across to native frogs? And if so, were they dangerous to the native amphibians? Lab trials by Ligia Pizzatto and Felicity Nelson showed that we could infect frogs with the toad lungworms, but that usually the host’s immune system could kill the tiny parasite before it reached the lungs. Encouraging! But sadly, not every native species is able to mount an effective defence. The Magnificent Tree Frog is a spectacular large green animal that lives in the Kimberley region. When Ligia tested it, the frogs took up toad lungworms and died.

After we began research on using the lungworm for toad control, a community group (Kimberley Toad Busters) heard about our work, and got so keen on the idea that they tried to push the government into letting them release parasites. And they even set up some research of their own. But nothing much came of it.

That’s the way research goes – you have a new idea, and you follow it up, but sometimes it turns into a dead end. And then, years later, another look gives you renewed enthusiasm. Things usually turn out to be more complicated than they seemed at first. That’s one of the reasons why TEAM BUFO has tried lots of different approaches. At least for the moment, it seems like the tadpole pheromones are giving us the most powerful weapons, so we are concentrating mostly on them. But we haven’t forgotten about lungworms. For example, Patt Finnerty’s recent studies suggest that in “bad” years, when the tropical landscape is very dry and toads are highly stressed. Lungworms can be devastating to the toads they infect.

Viruses from the toads' native range

Part of the reason for the toads' success in Australia is due to leaving diseases or parasites behind (“enemy release”). Those diseases and parasites may be very good at infecting toads. If so, maybe we could find toad-killing diseases in South America, then bring them here to attack the Australian toad populations. CSIRO looked into this. They found toad-killing viruses but unfortunately these also killed Australian frogs; that is, they weren't specific to toads. So it would be foolish to bring them to Australia, and CSIRO wisely abandoned the attempt.

Our recent success in sequencing the cane toad genome provides a new way to look for viruses. Because viruses rely on their hosts’ genetic machinery to make copies of themselves, viral DNA ends up embedded within host (toad) DNA. So we can find out about viruses from looking at the toad genome. That work has already identified a few viruses that would be worth checking – we know they attack toads, but we don’t yet know how much effect they have on the toad, or if they also attack native frogs. We need to know those things before we can think about using viruses for toad control.

A genetically-engineered virus to kill toads

Because Australia doesn't have any native toads, maybe we can exploit the genetic difference between toads and frogs to build our own toad-killer? CSIRO tried to genetically modify a naturally-occurring virus so that would spread through the environment and infect toads. The basic idea was to fool the toads' immune systems into thinking that adult toad proteins are foreign, and so mounting an attack on them as the tadpole develops into a toadlet. There are huge technical problems to getting this approach to work; and even if it worked, it would be difficult to convince lots of people (including TEAM BUFO!) that the virus wouldn't one day switch species and kill frogs as well as toads.

But even if that problem could be overcome, a toad-killing virus would be a disaster if it spread from Australia. Every other continent on the planet (except Antarctica) has lots of native toads - including Asia, right on our doorstep. Imagine if the virus killed all the toads in Asia, Europe, Africa, North and South America and Europe - the effect on biodiversity would be disastrous! Even if the virus only killed cane toads and closely related species, release of the virus in South or Central America would massively impact those ecosystems - far worse than cane toads have done in Australia. So we are sceptical that genetic engineering of this type could be an answer to Australia's cane toad problem.

It seems to us that the CSIRO viral approach is like a group of scientists in California deciding to build a genetically engineered virus to kill Australian gum trees that are invasive in the USA. Even the slightest possibility that such a virus could reach Australia would create a risk of such immense ecological devastation that the "solution" to invasive gum trees would be worse than the problem - and so, the approach wouldn't be worth contemplating. We feel that the same is true for toad-killing viruses. Fortunately, the CSIRO reached the same conclusion - and is not going to proceed with this approach. However, they are still looking into other forms of genetic manipulation.

One interesting idea is that by using modern gentic tools like CRISPR, we could design a way to affect toads so that they couldn't breed efefctively - maybe by making every baby toad a male not a female. Before long, such a population would crash. Or an even safer option - introduce a genetic change that reduces the toxicity of the toad's poison - so that a native predator eats a toad is less likley to die. Work on these possibilities is continuing.