Lots of Australian scientific researchers have worked with cane toads, because they are very common in the suburbs of many coastal cities and towns, are easy to collect and keep, and there aren’t the kind of ethical objections to removing them from the wild, or killing them, as apply to native frogs. Of course, all the same ethical issues apply to humane treatment as would apply to frogs – it’s not fair to blame the toads themselves for their presence in Australia. 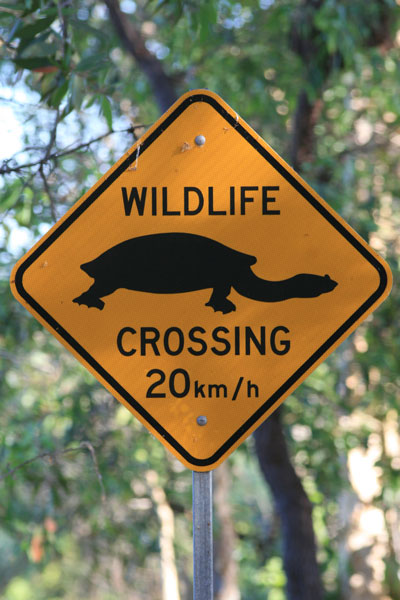 Apart from all this “occasional use”, there are a few major Australian research groups who have contributed to our knowledge of cane toad biology. The centerpiece of that effort for many years has been James Cook University (JCU) in Townsville, where Professor Ross Alford has spear-headed a series of pioneering studies that have set the scene for our current understanding of toads. Ross has brought lots of others into the work also, notably Professor Lin Schwarzkopf, also of JCU. Ross and Lin are major collaborators of Rick and his group, and co-supervised one of Rick’s former Ph D students, John Llewelyn, who was based at JCU for his research. That collaboration produced many interesting results. For example, Ross and Lin radio-tracked toads around Townsville, and at the Cape York (Queensland) invasion front in the early 1990’s. Their information on distances moved, activity levels etc provided a perfect comparison for our own information on the same topics at the invasion front near Darwin many years later. The changes were dramatic – the Queensland toads meander about, whereas the Darwin toads move in almost straight lines, and move much further each day – and so, are much faster at dispersing into new areas than the Queensland toads would be.
In Darwin, Professor Keith Christian is working on quite a few of the local reptiles and amphibians, including cane toads. Keith has conducted studies on many of these species to see how they deal with the highly seasonal rainfall (and thus, food supply) in the “wet-dry” tropics, and has expanded this work to include the cane toads that have arrived recently. Also at Charles Darwin University, Dr Tony Griffiths and his collaborators have been documenting the impact of cane toad invasion on goanna numbers.

Not too far away, Dr Sean Doody and his team have been examining the ecological impact of cane toads on aquatic predators on the Daly River. Sean worked with Professor Arthur Georges, the pre-eminent Australian expert on freshwater turtles. Arthur began studying pignose turtles on the Daly River many years ago, providing a longterm background understanding of the area’s ecology – very much like the situation we have at Fogg Dam. That  made it much easier for Sean to document effects of cane toads on freshwater crocodiles and large varanid lizards (“goannas”) on the Daly. A bit further upstream, Mike Letnic from Sydney University has also examined impacts of cane toads on crocodiles, in collaboration with Jonno Webb and with Rick.

At Fogg Dam itself, Professor Thomas Madsen and Dr Bea Ujvari (Deakin University) have been marking and radio-tracking goannas, to understand what happens when toads arrive. Their special interest in is the genetic factors that allow a few goannas to survive the toad’s invasion. 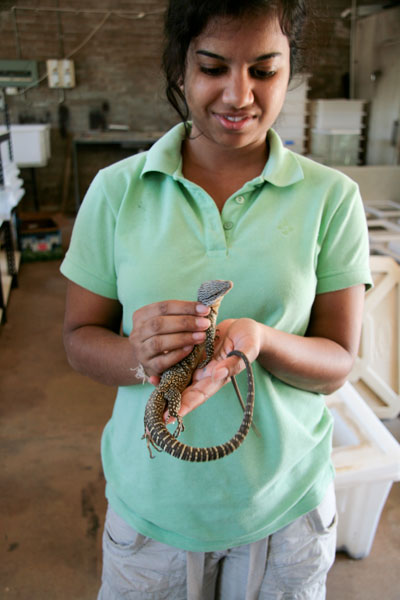 Goannas are one of the groups that are most vulnerable to toads. They were studied by Thomas Madsen and Bea Ujvari, as well as by Team Bufo (seen here, Nilu Somaweera at work; photo by Terri Shine)

Another really clever project on toads involves electronic listening posts that scientists from the University of Queensland (Professor Gordon Grigg), University of NSW (Dr Andrew Taylor) and University of Tasmania (Professor Hamish McCallum) set up in advance of the cane toad front. The electronic gadgetry inside the poles “listens” for frog and toad calls, and records where and when the calls are made. The idea was that by measuring calling activity of native frogs, any change in frog numbers due to toad invasion will be obvious.

The main results that are emerging fit well with several other studies that have been done, including our own (Matt Greenlees estimated frog numbers before and after the toads arrived at Fogg Dam). Contrary to lots of people’s expectations, the numbers of frogs didn’t change when the toads arrived. Basically, what seems to happen is that cane toads DO compete with frogs to some degree, and DO eat quite a few frogs; and some frogs DO die when they try to eat baby toads…. But the toads still don’t reduce frog numbers. Why not? Well, there are two answers. First, rainfall variation massively affects frog numbers, and local rainfall patterns probably overwhelm any effect of the toads. Second, many frog-eating predators die when the toads arrive (after all, cane toads are basically acting as booby-trapped frogs, from a predator’s point of view) – and so, survival rates of frogs tend to increase not decrease when the toads arrive.

At the University of Melbourne, Dr Michael Kearney has been building mathematical models to help us understand why toads occur where they do – and how far they might eventually spread. Michael’s models are very sophisticated, including all kinds of information about the toad’s temperature relationships and so forth, and are helping us to get a much better idea about all kinds of issues related to the geographic distribution of toads. Dr. Michael Kearney

Many other Australian scientists are studying aspects of cane toads other than ecology and impact. Professor Rob Capon and Dr Andrew Hayes (University of Queensland) are looking at cane toad chemicals – poisons, pheromones and so forth – in collaboration with TEAM BUFO. Professor Michael Mahony and Dr John Clulow (Newcastle University) have been exploring the possible use of “sterile males” as a way to control toads. Their work has been a major influence on Rick’s thinking about how we might reduce the ecological impact of toads at the invasion front.  Dr. Andrew Hayes  Dr. John Clulow

Professor Peter Koopman and his student John Ambramyan at Queensland University conducted exciting work on the notion of the “daughterless gene” - that we could control populations of invasive animals (like carp, toads etc) by genetically manipulating their sex-determining systems. The first step is to understand the existing system (sex chromosomes, etc), and John’s project has done just that.

In Western Australia, Dr Paul Doughty and Professor Dale Roberts are studying the frog fauna of the Kimberley region, in the hope of working out exactly what occurs there before the toads arrive and perhaps, change the system forever. Dr David Pearson, one of the main Team Bufo collaborators from the Western Australian Department of Environment and Conservation, is conducting a wide range of studies in advance of the toad front, again focusing on impacts of toads on the local fauna. Dr. Paul Doughty Professor Dale Roberts Dr. Dave Pearson

At Southern Cross University, Dr Dave Newell has been conducting extensive studies on cane toads at high elevations in the Border Ranges.

Our apologies to any researchers who we have accidentally left out!